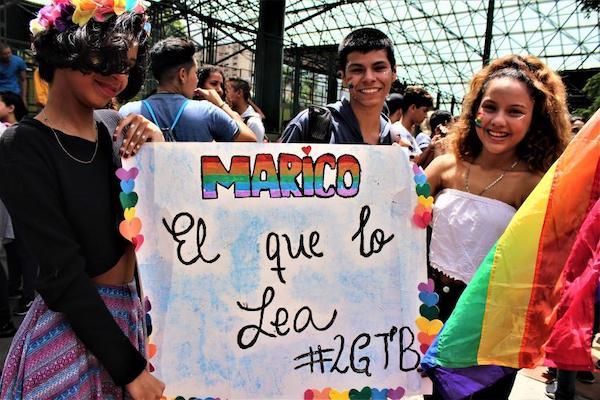 One of the sectors hardest hit by Venezuela’s economic crisis is the nation’s LGBTI community. Lacking access to life-saving medicines and denied certain rights, activists say there is still much to be done within the revolution.

A recent report by the Washington-based Centre for Economic and Policy Research found that there are more than 300,000 people at risk of death in Venezuela due to a lack of access to medicines or treatment. This includes about 80,000 people living with HIV, many of whom are LGBTI or sexual and gender diverse—the term commonly used in Venezuela.

United States sanctions have been a huge contributing factor to these medical shortages. According to the Venezuelan government, about US$5.5 billion in state funds destined for food and medicine purchases have been frozen by banks and financial institutions around the world.

Unable to access international markets, the government’s ability to continue providing free medicine for HIV patients has been greatly affected.

We understand that the Pan American Health Organisation has had to change the accounts [used to purchase the medicine] four times, because they keep getting blocked.

The blockade is not just against the government; it is against the people who are living with HIV … because they don’t allow the medicine to come into the country.

Even accessing the medication that is available is made harder due to discrimination. Mauricio Gutiérrez, from the opposition-aligned LGBTI rights group Positive in Collective, told Contrapunto:

In March, Green Left Weekly spoke with Isuara Guzmán, an activist with the Platform of Revolutionary Lesbian Women “Angela Davis”, about the situation facing Venezuela’s sexual and gender diverse community.

The economic war [on Venezuela] has greatly affected our community.

For example, those suffering from HIV have been denied access to anti-retroviral drugs. Previously, the Venezuelan state provided these for free to anyone with HIV within Venezuela regardless of their nationality.

Now, pharmaceutical companies are seeking to profit from the situation by selling medicines at exorbitant prices.

They are not the only ones trying to reap benefits, according to Guzmán. Non-government organisations have sought to encourage those with HIV to migrate and speak out against the government.

There are organisations outside of Venezuela that will supposedly guarantee you two or three years of medication if you leave the country and speak badly about Venezuela.

We have had a number of cases of comrades who have left the country because of these false promises and ended up dying because they were not able to access the drugs they needed in places like Panama, where it is very expensive, and Peru.

Everyone should have the right to freedom of movement but we know that some of those who have left have been forced to speak badly about Venezuela, about the government — particularly those that were active in the revolution — to be able to fit into the system, get a job, to not be attacked, to be able to get access to the medicines they need.

Though there are no official figures, based on anecdotal evidence and the decline in participation in the annual Sexual Diversity Pride March, Guzman estimates that close to 30% of the country’s LGBTI community have left the country.

“All of this has demoralised a lot of people, but many of us are still in the struggle.

“We always recall what [former] President Hugo Chavez said in his Alo Presidente show 138, when he said that homosexuals also have rights.

“That continues to motivate us to stay in the struggle; it was the reason why many of us joined the revolutionary struggle.

“It’s not that we didn’t believe in the left but within the left, here and internationally, we were supressed, we were not taken into consideration. We did not feel that we could be part of the left.”

“But between homosexuality and revolution, there is no contradiction.”

Guzmán explained that prior to 2002 most of the organisations in the LGBTI network were aligned with right-wing forces or non-political. At the time, left activists sought to work within these networks.

“We work[ed] together even though there was obviously never going to be broader political agreement.

“When this network fractured, leftists refused to allow the right to take up our banners of struggle, so we began to work on our own, setting up new organisations.

“We have never received money from the state, despite the opposition claiming that we are paid agents. What we have received from the state is logistical support for our activities.” These include the Sexual Diversity Pride March, held for the first time in 2001, but which only began to receive any kind of state support in 2005.

“For example, we organise the national Sexual Diversity Pride March. At the march you will see these groups there with their own placards, with their own slogans.”

Though facing criticism for this from some pro-revolution forces, Guzmán said “they are sexual diverse just like us, regardless of their political ideas, and they should have the same rights.

“When we fight for our rights, we fight for everyone’s rights regardless of whether they are right wing or not, and we don’t force others to think like us.

“Instead, we believe that through struggle, little by little, other will come to their own conclusions and join us.”

Guzmán said that despite the crisis, the state continues to support the sexual and gender diverse community.

Prior to Chavez’s election in 1998, “we were persecuted by the state,” said Guzmán.

Today, the state does not persecute us; rather it provides us with opportunities to participate in everything from social productive projects to the Bolivarian militia.

We are visible in all aspects of society and in all spaces of struggle.

A challenge the movement faces is that “some in the community believe Venezuela was always like this, that we were always able to live with this level of freedom, because what was previously extraordinary has become the ordinary in this revolutionary process.

“Many of those who grew up under the revolution see this is as just a normal part of life and ask: ‘Why do I have to believe in the left if I can go with my partner and kiss on the street and nothing happens to us’.”

But while Guzmán believes that “without this revolution we wouldn’t have anything”, she also acknowledges that “this is a long process, one in which the community needs to continue to raise its own banner”.

“This has not been a process in which the state has said ‘We are pro-LGBTI so we are for the rights for everyone’. There is a faction within the state that is against the rights of the LGBTI community as well as abortion and other similar issues.

“So the work of the social movements has been crucial to promoting change.

“We have had to educate our politicians: at one point [during the 2013 presidential election campaign, the pro-revolution candidate Nicolás] Maduro accused [opposition candidate Henrique] Capriles of being homosexual.

We called on Maduro to rectify [this] because, of course, there are homosexuals within the revolution and this can in no way be used as an argument against the opposition.

All of this process has occurred because we have educated them.

Nevertheless, the community continues to struggle for its rights.

From November to December, the National Constituent Assembly [which was elected in 2017 to propose reforms to the constitution] set up a commission to discuss a proposed law enshrining equality for the sexual and gender diverse community.

The draft law was the product of meetings and assemblies held over several years involving numerous organisations and members of the LGBTI community.

Proposals include: the right of each person to fully and freely exercise their sexuality; the right to an integral sexual education from primary school; access to free contraception for women and men; the right to live a life free of violence; and the freedom to form any type of family, free of any religious imposition.

Unfortunately, due to the current political situation, we haven’t been able to push this further, but activists are continuing to demand its approval.