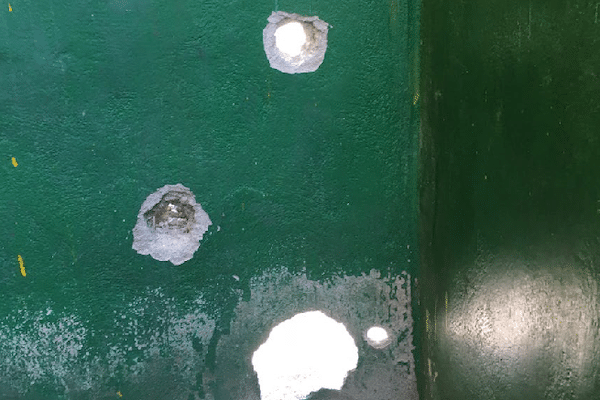 On November 13, 2018, police and other paramilitary personnel entered the neighborhood of Lasalin in Port-au-Prince, Haiti. What followed was a massacre of the civilian population. Buildings, including schools, were fired upon and destroyed, people were injured and killed, with some burned alive, women were sexually assaulted and raped and hundreds were forcibly displaced from homes. Bodies were either burned, taken away to be disappeared, buried, never to be found, or in some cases left to be eaten by dogs and pigs.

There has been widespread acknowledgement from the Haitian government, mainstream human rights groups and even the United Nations occupiers in Haiti, known by the acronym MINUJUSTH, that something terrible took place in Lasalin. However, in every case, there has been an attempt to downplay and obscure what actually happened. The numbers of the dead and wounded have been minimized, the extent of destruction to communities and displacement downplayed, and the violence has been primarily blamed on “gangs fighting over territory.”

The Lasalin massacre was designed to punish and destroy a neighborhood long known as a stronghold of the grassroots Lavalas movement and center of opposition. Our investigation determined that the narrative of “gang warfare” obscures the reality that the attack on Lasalin was government-orchestrated and supported, with police collaborating with and weaponizing criminal elements. According to many Lasalin residents and survivors, the coordinator of the massacre was Pierre Richard Duplan, alias Pierrot, of the PHTK (Parti Haïtien Tèt Kale, the ruling party of Jovenel Moise). Duplan had failed in his bid to become the mayor of Port-au-Prince and was now the government delegate for the West Department of Haiti.(1) A UN human rights report released on June 21st, 2019, also implicates Duplan.(2) The Miami Herald disclosed in a May 15th article that a police investigation had confirmed the involvement in the massacre of high-level government officials in the government of Jovenel Moise, tracing an assault rifle assigned to the National Palace to the massacre.(3) These are just some of the examples of government involvement in the massacre.

On April 1, 2019, members of the Haiti Action Committee (HAC) and the National Lawyers Guild (NLG) went to Haiti to investigate the November 13th massacre in Lasalin as well as the ongoing pattern of repression and extrajudicial killings targeting the people of Lasalin and other neighborhoods known for their activism against the government. We found a clear pattern of paramilitaries/death squads being armed and abetted by the government in order to terrorize the population and prevent opposition. This level of violence and repression has not been seen since the 2004 coup against President Aristide which, according to a study published in the medical journal The Lancet, resulted in an estimated 8,000 deaths in the Port-au-Prince area alone.(4)

Seth Donnelly is a public high school teacher in the Bay Area of California, where he has taught social studies for nearly two decades. He has been an activist with the Puerto Rican independence and Black liberation movements, doing solidarity work with prisoners from those movements. He has also been involved in the Haiti Action Committee since 2004. He is the author of the 2005 report Growing Evidence of a Massacre by UN Occupation Forces in Port-au-Prince Neighborhood of Cité Soleil: a Summary of Findings of the U.S. Labor and Human Rights Delegation to Haiti (Berkeley: U.S. Labor and Human Rights Delegation to Haiti, July 12, 2005). Donnelly has also co-authored 2005 human rights petitions filed with the Inter-American Commission on Human Rights censuring the U.S. and Brazilian governments for their roles in the killings of Haitian civilians following the 2004 coup.

Judith Mirkinson is a long term women’s and human rights activist. She has spent decades doing international solidarity work and is a co-author of the NLG 2007 report: Seeking Answers: Probing Political Persecution, Repression & Human Rights Violations in The Philippines. Her most recent article is: We Are Seeing Ourselves Being Dragged Back Into a Time When Women Were Dehumanized: Sexual Violence As a Tool of Repression in Haiti. She is president of the SF/Bay Area Chapter of the NLG.