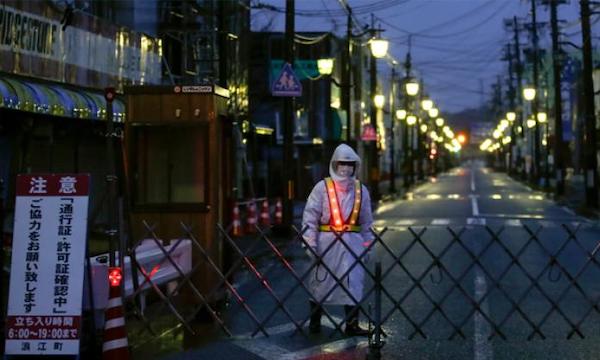 In March–on the eighth anniversary of the Fukushima disaster–Time magazine published an article with the headline: “Want to Stop Climate Change? Then It’s Time to Fall Back in Love with Nuclear Energy”. In it, the former head of the International Atomic Energy Agency, Hans Blix, evokes the imminent threat of climate catastrophe to argue, “There are paths out of this mess. But on March 11, 2011 [the day of the Fukushima disaster], the world’s course was diverted away from one of the most important. I am talking about nuclear energy”. He continues by criticising public fears of nuclear as irrational: “Plane crashes have not stopped us from flying, because most people know it is an effective means of travelling”. Blix speaks for the global nuclear industry, which is increasingly attempting to present itself as the solution to climate change.

But plane crashes do not kill untold numbers and spread deadly poisons over huge areas of the planet. Fukushima was and still is a horrific and ongoing human and environmental catastrophe, exposing the horrendous risks to which the powerful are willing to subject people and the planet. It should be remembered every time a pro-nuclear bureaucrat or politician exploits genuine concern about climate change to promote this deadly industry. It should never be forgotten.

The Tohoku earthquake was so violent that it shifted the Earth’s axis by almost 10 centimetres and altered Japan’s coastline by more than two metres. Japanese residents immediately knew that this disaster was worse than others, with the telephone poles and cinder block walls of Tokyo swaying back and forth. The quake and subsequent tsunami killed about 16,000 people.

The world watched in apprehension as the tsunami battered nuclear power plants, among them Fukushima Daiichi. TEPCO, the energy giant operating the plant, had known that this might happen. Just four years earlier, the TEPCO-run Kashiwazaki-Kariwa nuclear plant on Japan’s north-west coast had sustained damage from a magnitude seven earthquake. TEPCO management had estimated that a tsunami up to 15.7 metres high could strike the Fukushima plant, with disastrous consequences. But they did nothing.

Hydrogen explosions indicated the point of no return had been reached. Toxic plumes rose from the plant, and radioactive debris spewed out. All layers of containment were breached, and radioactive fluids began to flow into the soil and the sea. The first official reaction to the crisis was to lie to the public. While the triple meltdown was in full swing, TEPCO representatives held press conferences assuring the world that the reactors were stable, that the fuel was being cooled and contained, that there was no risk to human health. The company did not acknowledge that a meltdown had taken place until the following May. In 2016, TEPCO President Naomi Hirose admitted there had been a cover-up, describing it as “extremely regrettable”.

The government had a state-of-the-art system for detecting and predicting the spread of radiation in the event of a nuclear accident. Its findings–that massive quantities of radioactive material were released into the environment following the explosions–were likewise withheld from the public until late April, more than a month after the disaster. The head of the government’s Nuclear Safety Commission, Haruki Madarame, later explained the deception: “I hesitated to make such an announcement because it would cause social turmoil”.

International news of the disaster quickly began to contradict the official reassurances, and the scale of the danger could no longer be denied. Mandatory evacuation zones were ordered: first for anyone within a two kilometre radius, then 10 kilometres, then 20. More than 160,000 people fled. The chaotic evacuation led to thousands of deaths, particularly among the elderly whose medical care was disrupted.

Today, towns such as Futaba, Tomioka and Okuma are nuclear ghost towns. In them you will find a forest of metal gates, decaying buildings, shattered glass and cars wrapped in vines. The only human faces are mannequins in store windows, still dressed in the fashion of 2011. Sprawled across the highway between towns are hundreds of black bags filled with toxic dirt. They are one of the many problems of the clean-up effort. There are about 30 million one-tonne bags of radioactive topsoil, tree branches, grass and other waste. There is no safe, long-term storage place for this material.

The clean-up is undermined by cost cutting. Workers are forced to meet strict deadlines, even if it compromises safety. “There were times when we were told to leave the contaminated topsoil and just remove the leaves so we could get everything done on schedule”, explained Minoru Ikeda, a former worker. “Sometimes we would look at each other as if to say: ‘What on earth are we doing here?’”

The task is mammoth. The government and TEPCO now say that decommissioning the failed nuclear plant will take 40 years, at a cost of ¥22 trillion (or US$200 billion). But there is significant uncertainty about how to remove the hundreds of tonnes of molten fuel from the reactors. “For the removal of the debris, we don’t have accurate information or any viable methodology for that”, admitted the plant’s manager, Akira Ono, in 2015. “We need to develop many, many technologies.”

Beyond the plant itself, the total clean-up is likely to cost between ¥50 trillion and ¥70 trillion (US$460-640 billion), according to the estimates of a right wing think tank, the Japan Center for Economic Research. Thousands of workers continue to make daily trips between the contaminated zones and company accommodation. Dodgy subcontractors recruit largely from Japan’s destitute, including the homeless, migrant workers and asylum seekers. A recent Greenpeace investigation, “On the Frontline of the Fukushima Nuclear Accident: Workers and Children”, found evidence of hyper-exploitation and dangerous radiation exposure. In one case, a 55-year-old homeless man was paid the equivalent of US$10 for a month’s work. “TEPCO is God”, lamented Tanaka, another homeless Fukushima worker. “The main contractors are kings, and we are slaves.”

Scandalously, organised crime has penetrated the clean-up operations. Those with debts to the Yakuza (Japanese organised crime) have found themselves shoved into hazmat suits and set to work. The subcontracting system has allowed TEPCO to turn a blind eye to such human rights abuses.

Despite triumphant optimism from some champions of nuclear, researchers continue to uncover unexpected and unpredictable consequences of the Fukushima disaster. These include the discovery of tiny, glassy beads containing extremely high concentrations of caesium-137 (a radioactive isotope) among polluted dust and dirt particles. These bacterium-sized particles are easily inhaled and persistently insoluble. How they react with our bodies and the environment is not yet clear, but scientists increasingly believe them to be a health risk. The beads have been found as far from the disaster site as Tokyo.

The dangers faced by those returning to Fukushima prefecture have been a central controversy of recent years. Compelled by economic necessity, most have returned. But as of February 2019, 52,000 remain displaced, either unwilling to return or with homes in still-prohibited zones. In a recent press tour, the government repeatedly blamed “harmful rumours” for creating fear of returning as well as the Japanese public’s unwillingness to consume Fukushima’s fish and agricultural products.

“To me”, explained activist Riken Komatsu, “talking about ‘harmful rumours’ sounds like they are making someone else the bad guy or villain, as if they are blaming people for saying negative things because they don’t understand science and radiation. But those who have lost our trust do not have the right”.

Mistrust is justified. Prime minister Shinzo Abe, keen to move on from the crisis, intends to end evacuations by the time Japan hosts the 2020 Olympics. The international and (prior to the meltdowns) Japanese standard of acceptable exposure to radiation, one millisievert per year, has been scrapped. Across Fukushima prefecture, measurements five times that level are now deemed safe.

Some places measure as high as 20 millisieverts per year. These radiation levels are especially dangerous for children, who are far more sensitive than adults to even low levels of exposure. It will take decades before the cost of the authorities’ carelessness can be measured in increased cancer rates. The loss of happy, healthy human life of course can never be quantified.

Hans Blix concludes his pro-nuclear Time article by insisting, “Radiation is a force that can be destructive and dangerous if not used prudently, but it can also be tamed and used to our benefit”. But Fukushima is not just a story of nuclear technology being used imprudently. It is a story of capitalism acting as it is supposed to: putting profits ahead of the interests of the many. An untameable economic system cannot “tame” radiation.

And those who “benefit” from the powerful nuclear industry are the same people who crave military dominance. The politicians and officials currently fighting to rebuild Japanese nuclear capability are thinking far more about the military tensions surrounding them than tackling climate change. We don’t need to a build a world full of deadly nuclear power plants to combat climate change. We need clean, renewable energy and a system that prioritises people and the planet over money and military might.