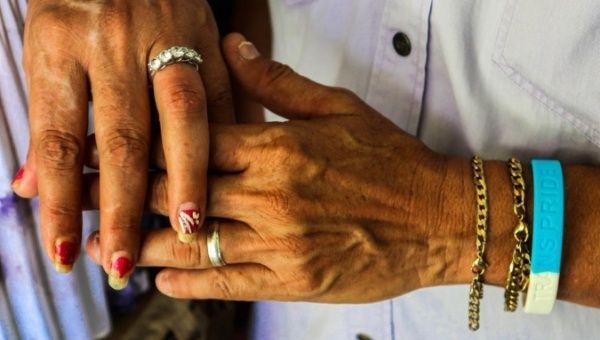 Cuba’s respect for LGBT rights are considerably progressive for the region.

Cuba witnessed the nation’s first transgender legal union this week when a couple was married at the Palace of Marriages of San Francisno de Paula in Havana, the National Center for Sex Education (Cenesex) reports.

The center announced the event via Facebook, posting wedding photos of the pair signing their vows Tuesday.

The Cenesex explained that the couple is taking part in services offered by the National Commission for Comprehensive Attention to Transsexual Persons and are currently undergoing state-funded, sex-change procedures. They have still registered as male and female, making their marriage is legal in Cuba where same-sex marriages are still prohibitted.

“This legal act does not violate what is established in the Cuban legal system because it is about two people whose gender is legally registered as feminine and masculine, even if they are not consistent with the gender identities of Ramces and Dunia,” the center wrote.

The state’s acknowledgement of their love assumes a “special relevance,” and precedent, the Cenesex wrote, “considering the … Ministry of Justice respected the way in which they express their gender identity, which is an obstacle to overcome” for transgenders on the island.

A staunch supporter of LGBT rights, Cenesex—led by Mariela Castro, daughter of Communist Party leader Raul Castro—has centered on the fight for equal opportunities in Cuba.

In April, an article proposing to alter the definition of marriage from “man and woman” to “two persons,” was scrapped from the new Constitution and put on the shelf to revisit in two years.

However, Cuba’s respect for LGBT rights are considerably progressive for the region, with the state flipping the bill on sex-change operations and prohibiting any sort of discrimination based on sexuality.