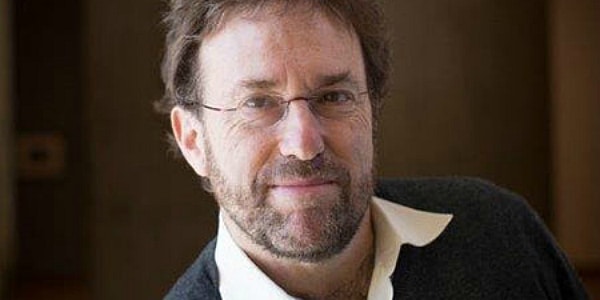 Janine Jackson interviewed Lawrence Glickman about racism and euphemism for the July 19, 2019, episode of CounterSpin. This is a lightly edited transcript.

Janine Jackson: When Iowa Rep. Steve King casually asserted the superiority of white people over others, asking, “White nationalist, white supremacist, Western civilization—how did that language become offensive?” it wasn’t a misstep. King keeps a Confederate flag on his desk, and he’d already made and defended the comment that U.S. culture must be restored, but it can’t be “with somebody else’s babies.” But NBC News ordered reporters to “be careful to avoid characterizing [King’s] remarks as racist,” though “it is OK to attribute to others, as in ‘what many are calling racist’ or something like that.”

The King story is a reminder that the reluctance unto avoidance unto refusal to use the word “racism”—on awkward display in the wake of Trump’s latest spewing against four congresswomen of color—isn’t just human nature, it’s policy. To the very real extent that language has effects, maybe recognition that this avoidance is a tactic, with a history, can help us resist them.

Here to help us think about that is Lawrence Glickman, professor of American studies at Cornell University, and author of, among other titles, Buying Power: A History of Consumer Activism in America. He joins us now by phone from Ithaca. Welcome to CounterSpin, Lawrence Glickman.

Lawrence Glickman: Thank you very much. 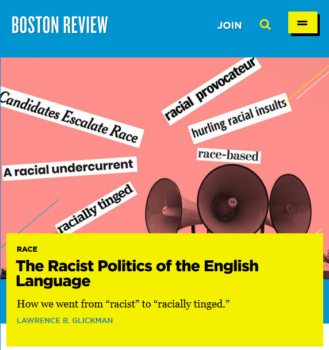 JJ: We’re supposedly in this stark era—“Democracy Dies in Darkness,” you know. But Donald Trump tells four women of color in Congress to “go back where they came from,” and we have tone-setters out here saying, “Why I declare, that’s downright racially charged.”

In your recent article for the Boston Review, “The Racist Politics of the English Language,” you talk about, for one thing, the obviousness and awkwardness of linguistic evasions like that around racism; sometimes words are really turned into nonsense. But besides telegraphing that there’s something touchy here, what does the use of terms like “racially charged,” or “racially tinged”—what does that convey?

LG: Yeah, well, that’s a great question, and I think a lot of people have been wondering that. In fact, just the other day, Peter Baker of the New York Time s wrote an analysis of Trump, and he talked about how Trump likes to play with “racial fire.” And I was trying to imagine how fire can be “racial” when I was reading that headline.

I think that what my research shows is that these sorts of terms—“racially tinged,” “racially charged,” etc.—mostly arise during the civil rights era. And I think partly they do so because prior to that, there was much more willingness for politicians and others to just outright call themselves white supremacists, without qualification and without dog whistles.

But as we entered an era where colorblindness became the way in which mainstream culture chose to talk about race, I think there became a suspicion, a fear of using the charge of racism, and so this seemingly neutral language arose, of saying things were “racially charged” or “racially tinged,” often to ridiculous effect, and inaccurate effect.

JJ: Yeah, I think certainly some people are calling Trump’s racism “racism.” And the Associated Press has changed its style book, to say don’t use “racially charged,” or terms like that, as euphemisms.

But I think some people think that, in general, the country’s moving steadily from “not naming” to “naming,” moving towards frankness and acknowledgement. And, in fact, the trajectory hasn’t really been that way at all. In fact, if you look back at papers in the late ’50s, people might be surprised by the language they saw.

LG: Yes, I think that’s right. Much more forthright language was used then than now, and the kind of linguistic somersaults we have been seeing recently, I think, are a result of the idea that there’s nothing worse than the charge of racism. And a lot of times, I think, there’s a feeling that someone being charged with racism is almost worse than being racist itself.

One thing I’ll say is that in the last few months, since my piece came out and since AP changed their style guide, I’m finding more and more explicit, straightforward uses of the term “racist,” and I think the House Resolution the other day called them “racist” tweets explicitly.

So I think we’re kind of now at a middle point, where it’s hard to say which way it will go, whereas a year or so ago, very few people in the mainstream media were saying “racism.”

JJ: Yeah, sometimes today it feels as though media work harder than politicians to police the boundaries of conversation. Some of our listeners may remember, not that many years ago, bigwig reporters saying, “You can’t just say the president is lying.” You know, “you can’t say lying.” And they would go further and say, “We think it’s more powerful to say, ‘The president’s words did not comport with events,”’ or something like that. And that’s because lying, like racism, was seen as, above all, a charge or a slur.

And I guess what I want to get at is, words mean things; we can’t have a conversation about “talking about talking about,” you know; racism is a real thing, it exists in policies and structures and actions, yeah?

Lawrence Glickman- “So much of this language protects Trump and others who use it, by making ambiguous what is really not that ambiguous.”

LG: I agree completely. And one of the points that I tried to make in my Boston Review piece is that the problem with saying things like “racial undercurrents,” “racial attacks,” “racial connotations” and “racial fears,” and so forth, is it creates a sort of a false equivalence.

When you say “racial”—and most always the media is talking about attacks on people of color, using language or participating in actions that oppress people—the language of “racially tinged,” “racially charged,” kind of suggests that it could go either way. It doesn’t really get at the question of power relations, which is central to racism.

So on the one hand, it’s kind of wishy-washy, inaccurate language, but on the other hand, it’s also really obfuscating language. And I think, as you started the interview by talking about the Washington Post motto, which—I forget exactly what it is….

LG: Right. “Democracy Dies in Darkness” suggests that we need to shine a light on things and try to say what they are. And so that’s part of my other critique of the term is that it’s more than just using a euphemism. It’s also misplacing what the issue is, and it’s denying the question of power relations that has been central to the history of white supremacy, in the United States and elsewhere.

JJ: Years ago, pollster Lou Harris found and said that Americans support “affirmative action,” but they don’t support “preferential treatment,” and he went on to say, for reporters to use those terms interchangeably amounts to a kind of journalistic malfeasance.

When I presented that information to journalists, I was told, essentially, “You know, it’s words, and we’re writers, and we don’t want to repeat the same phrase throughout a story.” And there just was no owning of the impact of the language.

But my takeaway, also from the affirmative action thing, was, to the extent that reporters were really talking about the thing itself, talking about acts or policies or structures or systems, and not “talking about talking about” the thing, you know, there was less need for those gloss terms to begin with.

LG: There’s a way in which so much of this language protects Trump and others who use it, by making ambiguous what is really not that ambiguous. And so I think getting at those questions, about what these things mean, what they connote, how they’re situated in history, are all really important. 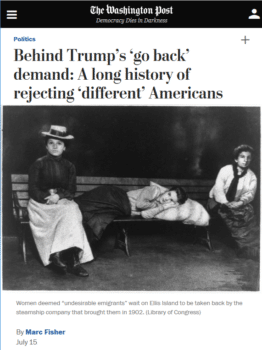 JJ: And I guess maybe you’ve answered it, but if you had any thoughts, you say you have seen some, we’ll call them improvements—I think using words to mean what they mean is an improvement—in the last few months. Maybe it’s because people think, “OK, Trump has finally gone too far.” But then I think, as you also note, the definition of “too far” has itself shifted, and is itself shaped.

LG: That’s partly why it’s so important for the media to convey what is happening, how have these phrases been used before.

I think yesterday or the day before, the Washington Post did a really excellent story on the history of the phrase “go back where you came from,” and showed that, because one could imagine in this colorblind sense…. And Trump initially tried to say something like that: “Oh, there was no…. I was just saying people should go back where they came from.” But they showed that that phrase is completely intertwined with the history of American racism.

As journalists do that, it makes it harder to give that sort of wiggle room, that these terms have a history and they have a power. And we need to acknowledge that, not pretend that that history doesn’t exist.

JJ: We’ve been speaking with Lawrence Glickman, professor of American studies at Cornell University. His book Free Enterprise: An American History is forthcoming from Yale University Press. You can still read his article, “The Racist Politics of the English Language,” online at BostonReview.net. Lawrence Glickman, thank you so much for joining us this week on CounterSpin.

LG: Thank you very much for having me.