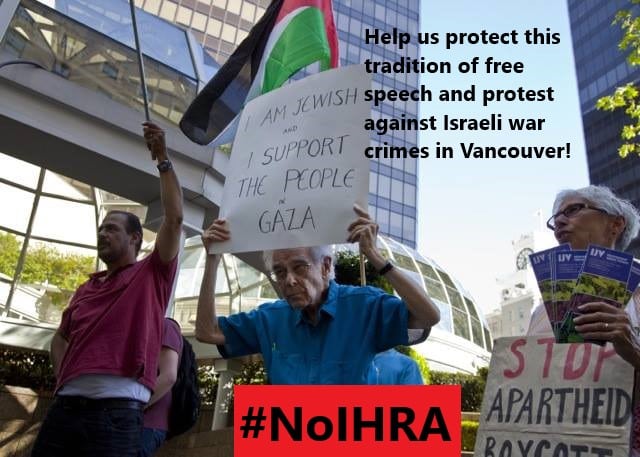 The City of Vancouver, Canada might seem to be an odd place for a battle over the International Holocaust Remembrance Alliance (IHRA) definition of antisemitism. But that is exactly what happened in the last week, and it all concluded with a temporary victory for free speech, human rights and common sense.At the end of June, the federal government of Canada endorsed the IHRA definition as part of its new official “Anti-Racism Strategy” announced by minister Pablo Rodriguez. This was a unilateral move by the government which did not involve a vote in the House of Commons. The Israel lobby however, in their ecstatic gloating over the endorsement, made it clear they would be pushing to have the IHRA definition adopted at all levels of government, including provincial and municipal.

Which brings us to the Vancouver City Council, where one Non-Partisan Association (NPA) councillor introduced a motion to be heard at the last meeting before summer break. The motion contained the standard reasoning that one has come to expect from the Israel lobby promoting the IHRA definition and concluded with adoption of the definition and its examples; it also explicitly instructed staff to share the definition with various city departments including the Police Department, School Board, Parks Board and the Public Library for “review and consideration as an additional practical tool”. What the outcome would be of this “additional practical tool”, especially by the Police Department, one could only speculate. The history of what has transpired so far in other countries regarding the IHRA definition is extremely troubling, and was called out a year ago by over 40 Jewish groups in an open letter. They noted that the definition is “intentionally worded such that it equates legitimate criticisms of Israel and advocacy for Palestinian rights with antisemitism, as a means to suppress the former.”

Passing this motion would have set a dangerous precedent of being the first municipal council in Canada to endorse the IHRA definition. Vancouver, however, has a long and proud tradition of being both anti-racist and defending free speech and Palestinian rights. A popular campaign was immediately launched to tell Vancouver City Council why this motion should not be adopted–letter writing, social media and articles in local papers all happened. People from both within the Jewish community and other sectors were adamant in stating that this definition had more to do with squashing criticism of Israel than it did with contributing to the fight against racism. The Palestinian community also pointed out that the definition actually promotes anti-Palestinian racism, as it severely limits and defines what the Palestinian narrative can be. The Vancouver & District Labour Council (VDLC), the BC Civil Liberties Association (BCCLA) and civic parties like the Coalition of Progressive Electors (COPE) all took the position that adopting the IHRA definition would be divisive and harmful.

The majority on City Council both heard and understood the message. In a vote of 6-5 (the dissenting 5 were all NPA councillors), the Council decided to not proceed with the motion and instead referred it to committee for recommendations on how to combat all forms of racism. Councillor Michael Wiebe was quoted as saying that “we need a policy that tackles all forms of racism, including white supremacy. It’s too important to get this wrong.”

THAT Council refer this motion to the Racial and Ethno-Cultural Equity Advisory Committee to provide recommendations to Council on how the City of Vancouver can increase action to combat all forms of racism and hatred, including Antisemitism.

Although referral to committee is often the bureaucratic tactic to not deal with issues, in this case the instructions in the referral made it more meaningful. And most importantly, Vancouver City Council refused to set a precedent as the first Canadian city to endorse the IHRA definition.

Activists know that the struggle will continue at the committee level but the small amount of time they had to prepare for the council vote allowed them to educate many people on the dangers of the IHRA definition; they feel confident that more time is only to their advantage.

Canada’s main Israel lobby group, Centre for Israel and Jewish Affairs (CIJA), was not happy with the outcome. They had invested heavily in promoting the motion and one of their officials stated he would be at City Hall when it was introduced. They issued a statement expressing their “disappointment”, claiming that this was a “setback in the struggle against racism and bigotry”. They went on to allege that, “By delaying the initiative to protect Jewish community members at a time of rising antisemitism, those councillors who voted against the motion are on the wrong side of history.”

Vancouver residents do not need these lectures by a lobby group that is more interested in punishing critics of Israel than it is in fighting racism. Members of the Jewish community in Vancouver made this exact point in their submissions to Council. The active involvement of many progressive Jews against this motion endorsing the IHRA definition was one of the more uplifting aspects of this campaign, along with the support from broader sections of Vancouver society. This was also reflective of the majority of Canadians who support Palestinian human and national rights.

Palestinian activists have not had many occasions lately to be optimistic, especially in the Canadian political arena. Hopefully, what happened at Vancouver City Council is just the first step in pushing back against the censoring of free speech and the bullying of activists who support Palestinian rights.

Marion Kawas is a long-time pro-Palestinian activist, a member of BDS Vancouver-Coast Salish and cohost of Voice of Palestine.