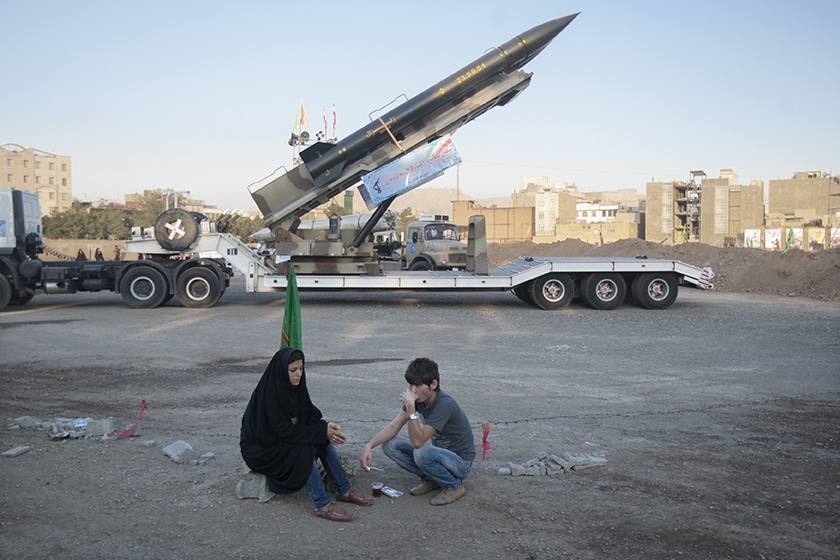 An Iranian couple rest as they sit in front of the Iranian surface-to-surface Zelzal missile while visiting an exhibition to mark the anniversary of the Iran-Iraq war (1980-88) at a Revolutionary Guard Corps military base in northeastern Tehran, September 26, 2011. © Morteza Nikoubazl.

In late May, the shipping authorities in Panama deregistered Grace 1, an oil tanker carrying two million barrels of Iranian crude oil around the coastline of Africa and into the Mediterranean Sea. Having lost its Panamanian flag, the ship now had to carry an Iranian one.

It was this deregistration that began a serious provocation. Off the coast of Gibraltar, British Royal Marines seized and impounded Grace 1. The British said that the ship was going toward Syria, a breach of European Union sanctions. Iran denied this.

Under pressure from the United States, Panama has removed its flag from 59 vessels that are either linked to Iran or Syria. A ship without an international flag cannot buy insurance, which means that it has to almost instantly take on a different flag.

The United States has been pressuring countries such as Sierra Leone and Togo to pressure them not to put their flags on vessels that are part of Iran’s oil export trade. Carrying an Iranian flag does not allow ships easy access to insurance; the United States has pressured insurance companies to deny insurance to these ships.

Ships with Iranian flags not only have a hard time buying insurance, but they are also on the radar of customs officials who have been asked to give these ships more scrutiny, therefore delaying their progress and raising the costs for the transport of Iranian oil.

On July 26, Tehran’s leading cleric Ayatollah Seyyed Ahmad Khatami said that Britain’s actions off the coast of Gibraltar—at the mouth of the Mediterranean Sea—remind Iran of Britain’s colonial history. Britain, he said, is a “cunning and colonial fox.”

The chair of the National Security Committee of Iran’s parliament—Mojtaba Zonnour—said that the actions of Great Britain should be described as “bullying and piracy.”

Two Iranian ships—Bavand and Termeh—sat for weeks in Brazil’s Paranaguá port. They were not able to refuel because the Brazilian state oil company—Petrobras—refused to sell them oil due to pressure from the United States. Sanctions and diplomatic pressure on countries that host Iranian ships have increased over the past few months.

But the situation is not entirely simple. Iran imports $2 billion of goods from Brazil per year—mainly corn, meat, and soy. Iran’s ambassador to Brazil, Seyed Ali Saghaeyan, told Brazilian officials that if Petrobras continued to deny Iran oil for its ship, then Iran would go elsewhere to buy these goods. Brazilian traders pressured the government not to alienate Iran.

Brazil’s Supreme Court’s judge—Chief Justice Dias Toffoli—ordered Petrobras to refuel the ships. The Court said that the ships have a contract with a Brazilian firm—Eleva Química—which is not under U.S. sanctions. These two ships—including three others (Daryabar, Delruba, and Ganj)—have been carrying urea to Brazil and then returning to Iran with corn.

In response to the seizure of Grace 1, Iran’s Islamic Revolutionary Guard Corps detained Stena Impero, an oil tanker that carries a British flag. This ship, the Iranians say, was behaving erratically, when it was boarded by Iranian Guard officials and then detained.Stena Impero and its crew of 23 were taken to the Iranian port of Bandar Abbas.

Iran’s Guard also boarded MV Mesdar, a British ship that was sailing under a Liberian flag. Iran said that it intervened with MV Mesdar because it steered off course toward the Iranian coastline. A few hours later, MV Mesdar was allowed to proceed.

Iran’s permanent mission to the United Nations sent a letter to the UN authorities offering Iran’s view of what happened with Stena Impero. The Iranians said that the tanker collided with an Iranian fishing boat, and seriously injured the fishermen. Iranian authorities radioed the Stena Impero, which ignored its warnings and sailed away from the bearings suggested by the Iranian authorities. Iran said that it is conducting an investigation of the accident.

Stena Impero’s owners denied this narrative, as did the British government. The ship is owned by a Swedish-based firm—Stena Bulk. The Swedish government has opened a dialogue with Iran and others to ensure freedom of navigation in the strait.

Britain’s navy began to patrol the Strait of Hormuz, between Iran and Oman, with much more aggressiveness. HMS Montrose, a navy frigate, has been engaging Iranian Guard vessels. The British government has said that all British merchant ships will now be escorted by British navy frigates—not only the HMS Montrose but also with other ships that are now on their way to the gulf.

The United States is leading a process to create a naval force that would patrol the Strait of Hormuz. The U.S. has said it will send “command and control” ships to coordinate the escort naval vessels from different countries. It is likely that Britain will work with the U.S. as the Strait of Hormuz is further militarized.

But there are cracks in the coalition.

The Japanese, for instance, have said that they will not participate in this U.S.-led military operation. Japan’s Prime Minister Shinzo Abe said that Japan wants to reduce tensions and not inflame the situation. Japan’s Defense Minister—Takeshi Iwaya—and Chief Cabinet Secretary—Yoshihide Suga—had previously indicated that Japan would join the U.S. Now, Abe said that there should be a pause on these developments. He wants to settle the dispute with Iran. Others in Asia agree.

Iran’s President Hassan Rouhani said, “The main responsibility for protecting the Strait of Hormuz and the Persian Gulf is mainly with Iran and neighbouring countries,” mainly Oman. Rouhani said sharply that if other countries try to create tension, “they will receive a proper response from Iran.”

Rouhani made this comment as his special envoy to France—Iran’s Deputy Foreign Minister Abbas Araghchi—met with France’s Foreign Minister Jean-Yves Le Drian to insist that Iran would not allow any disturbance in the Strait of Hormuz.

Iran’s Brigadier General Hossein Dehghan told al-Jazeera, “Any change in the status of the Strait of Hormuz will open the door to a dangerous confrontation.” Iran is simply not prepared to back down over asserting its role in the 21 nautical mile Strait of Hormuz.

About a fifthof the world’s oil goes through this narrow waterway. Most countries in the world do not want to see this flashpoint explode into open war—as was openly indicated at the Non-Aligned Movement gathering of foreign ministers in Caracas, Venezuela.

Iran has tried to be creative with its shipping. It cannot afford to be hemmed in. On June 3, according to Reuters, Hayan, an Iranian ship, left the port of Bandar Abbas for Karachi, Pakistan. Four days later, the ship’s name changed to Mehri II and it carried the flag of Samoa. A week later, Mehri II transferred its cargo to an unknown vessel. It then turned around and returned to Iran as Hayan.