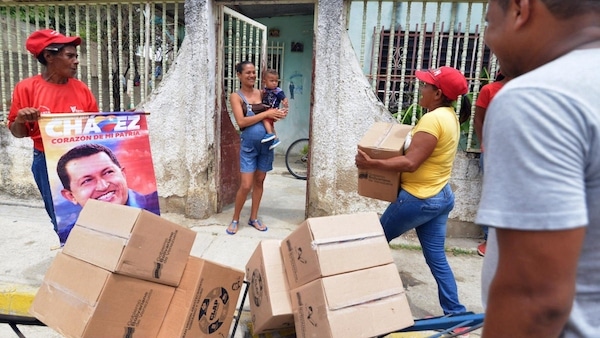 The U.S. Treasury Department imposed new sanctions against a host of individuals and companies connected to Venezuela’s CLAP subsidized food program on Thursday.

The latest round of unilateral measures from Washington is centered on Colombian businessman Alex Nain Saab Moran, who is claimed to have profited from overvalued state contracts, including ones involving food imports for the CLAP [Local Supply and Production Committees] program.

“Through a sophisticated network of shell companies, business partners, and family members, Saab laundered hundreds of millions of dollars in corruption proceeds around the world,” the Treasury statement reads.

The U.S. goes on to claim that Saab and business associates enjoy access to lucrative contracts dating back to 2009, in sectors such as housing and mining.

Concerning the CLAP scheme, the Treasury Department sanctioned 13 companies allegedly “owned or controlled” by Saab or by business associates Alvaro Pulido and Emmanuel Rubio. The companies are registered in various countries, including Colombia, Mexico, Turkey, Hong Kong, and the UAE. U.S. officials claim these are front and shell companies used to package and ship food to Venezuela which have been awarded overvalued government contracts in exchange for kickbacks to state officials.

Apart from the 13 companies, sanctions were additionally imposed on ten individuals, including Saab, Pulido, and Rubio. The measures also target three sons of Venezuelan first lady Cilia Flores who are alleged to have received kickbacks in exchange for giving Saab access to government contracts, Tachira Governor Jose Vielma Mora, and two sons of Saab. All companies and individuals sanctioned will see any U.S. assets in which they hold more than 50 percent of shares blocked, and all U.S. individuals and companies are forbidden from dealing with them.

Washington had previously threatened to sanction the CLAP program, which currently benefits a reported six million Venezuelan families through monthly deliveries of food boxes at subsidized cost. Previous sanctions targeted sectors such as banking, mining, and especially oil. Financial sanctions, which have hampered all transactions and blocked Venezuelan accounts abroad, have also seen Caracas turning to gold and resorting to indirect schemes for imports.

Caracas blasted the recent measures, with President Nicolas Maduro calling them “desperate” saying that “not even a million sanctions” would stop the CLAP system. Maduro went on to add that the system should be strengthened by an increase in national production.

The Foreign Ministry likewise reacted through a statement, denouncing the “criminal purpose of depriving Venezuelans of their right to food.”

“The Trump administration has blocked bank transactions, food and medicine purchases, as well as an endless number of actions meant to achieve regime change by non-constitutional means,” the statement reads.

The CLAP program was created in 2016 as the Venezuelan government looked to shield the most vulnerable sectors from the economic crisis. The boxes delivered contain a range of basic foodstuffs including cornflour, cooking oil, rice, beans, and pasta.

While government officials have pledged to increase coverage of the CLAP program to 12 million families and the frequency of deliveries increased from monthly to every 15 days, many sectors of the country continue to have irregular, delayed, or non-existent coverage of the scheme. Recent gasoline shortages have increased distribution problems in the interior of the country and reduced the amounts of food delivered.

The program has also been mired in corruption allegations, with accusations that insiders divert products to resell at inflated prices. In May, President Maduro announced the incorporation of the Bolivarian Militia to supervise the CLAP system and fight corruption. 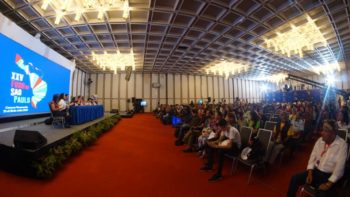 The latest round of U.S. sanctions coincided with the inauguration of the 25th Foro de Sao Paulo on Thursday, with Venezuela hosting the current edition from July 24 to 28.

Over 400 delegates from 120 Latin American social and political organizations will hold a series of discussions and workgroups under the title “Peace, Sovereignty, and Prosperity of the Peoples.”

According to official sources, U.S. aggressions against Latin America, the peace process in Colombia and judicial attacks targeting leaders such as former Brazilian President Lula da Silva will be among the subjects of the conference.

The Foro de Sao Paulo was originally an initiative of former Cuban President Fidel Castro and then trade union leader Lula da Silva to debate and build unity amidst the Latin American left. The first meeting was held in Sao Paulo in July 1990.