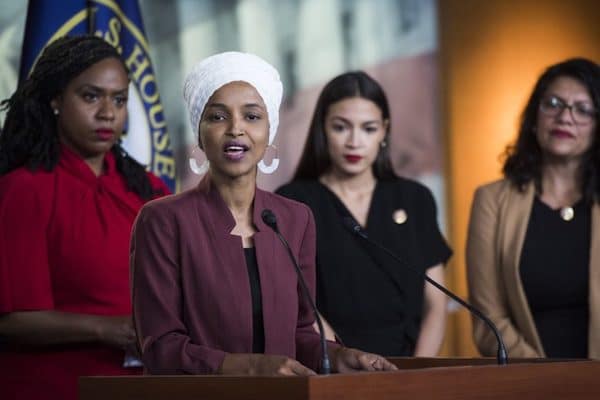 The Squad vs. Trump and Pelosi

In the past couple weeks, President Trump has gone on a racist, red-baiting rampage against four congresswomen elected in 2018. The four women of color–Alexandria Ocasio Cortez, Rashida Tlaib, Ilhan Omar, and Ayanna Pressley–are now collectively known in the media as the “squad.” Among other things, Trump tweeted that they should “go back [to] the totally broken and crime infested places from which they came,” despite only one of them being born outside the U.S.

Of course this is only the latest episode in Trump’s offensive against immigrants and overtly whipping up racism. During the 2016 campaign, he claimed that hordes of Mexican criminals and rapists were crossing the Southern border. He later described various countries which people were fleeing, often because of conditions created by U.S. imperialism, as “shitholes.” Trump has also given direct encouragement to far-right white nationalists, most notoriously when he said there were “very fine people” among the neo-Nazis marching in Charlottesville, Virginia in August 2017.

But Trump was also attacking the congresswomen’s progressive politics by calling them “radical left” and “anti-American.” Other Republicans piled on, calling AOC and the others “communists” and “anti-Semites.”

It is not news that Trump directly seeks to stoke racial division in part to solidify his base. This helps Trump to cover up and distract from the various ways in which his policies serve the interests of the super rich who are screwing all sections of the working class.

But Trump and the Republicans also have a more specific aim. They deliberately exaggerate and distort the political positions of the squad and seek to use incendiary attacks to force the Democratic leadership to defend them. Trump wants to run his 2020 campaign around the idea that he is protecting the country from “radical socialism” and that the squad is the real face of the Democratic Party. As Trump himself put it: “The Dems were trying to distance themselves from the four ‘progressives,’ but now they are forced to embrace them. That means they are endorsing Socialism, hate of Israel and the USA! Not good for the Democrats!” For good measure, Trump has put an “Official Socialism Approval Poll” on his official 2020 campaign website with great questions like: “Which type of country would you prefer the United States be? a) A thriving Capitalist country b) A radical Socialist country.”

The Squad and the New Left

In fact, Trump’s attacks come in the middle of increasingly open divisions in the Democratic Party in the House of Representatives with Nancy Pelosi attacking the squad in early July, albeit in somewhat veiled terms, saying they represented just themselves: “All these people have their public whatever and their Twitter world. But they didn’t have any following. They’re four people and that’s how many votes they got.”

This was in the wake of a vote on a Democratic bill to fund operations at the border. The squad were the only Democrats to vote against it, saying in a joint statement that the bill “gives even more money to ICE and CBP and continues to support a fundamentally cruel and broken immigration system.” In the end the Democrats agreed to an even worse bill from the Senate.

The squad has taken a clear and principled stand for closing the detention camps at the border and for disbanding ICE. More generally, they are for taking a more aggressive and confrontational stand against Trump and the right-wing agenda than the corporate leadership of the Democratic Party is prepared to do. AOC and Rashida Tlaib are members of the Democratic Socialists of America (DSA) but all four received support from Justice Democrats in their campaigns last year. There are also differences among the squad on some issues as reflected in the recent vote on the bipartisan pro-Israeli government, anti-BDS bill where Pressley voted for and the other three voted against.

In many ways, AOC is the most decidedly left of the four, as well as having the biggest following. She supported activists occupying Pelosi’s office demanding action to address climate change before she was even sworn in. She then boldly brought forward a proposal for legislation for a Green New Deal that aims at a rapid transition to an economy based on renewable energy and zero carbon emissions. She also called for a 70% marginal tax rate on income over $10 million. What has possibly most irked Pelosi though is AOC’s support for the Justice Democrats’ call for progressive candidates to take on establishment Democrats in next year’s primaries.

What Is To Be Done?

Socialist Alternative, along with millions of ordinary people, stands in solidarity with AOC, Tlaib, Omar, and Pressley against the attacks of this dangerous reactionary president but also against the attacks of Pelosi and the Democratic establishment. The question, however, is how they should use their massive platform to develop and help lead the struggle against the right to victory.

When Pelosi said the squad’s support is just based on their “their public whatever and their Twitter world,” AOC responded by saying “That public ‘whatever’ is called public sentiment. And wielding the power to shift it is how we actually achieve meaningful change in this country.” AOC is correct that a big section of the base of the Democratic Party has moved to the left in the past couple years, particularly in the wake of Bernie Sanders’ transformative 2016 presidential campaign and the popularization of his pro-working-class program. There is massive support for Medicare for All and the Green New Deal. The shift to the left in the base led to the election of progressives nationally and at state and local level including a number of self-described socialists. It also led many presidential candidates to try to sound a bit like Bernie though the bulk of them are really fake progressives.

But we have to be clear that the pressure of “public opinion” by itself will not force the Democrats to change their nature as a party dominated by corporate interests. Nor will it defeat the agenda of the right.

We need a mass movement centered on the social power of the working class to begin turning the tide against the right and to push back against xenophobia and racial division. This is the decisive element missing today. Mass protests by women and young people occurred early in the Trump administration on a regular basis but these did not have a clear strategy and direction and were ultimately subsumed by the push to defeat the Republicans electorally in 2018.

If the squad and Bernie Sanders had called for mass protests to shut down the camps at the border in June there would have been a huge response. But to make this the beginning of a sustained struggle such mobilizations would have to also take up a series of demands that address the needs of all working people. Fighting for quality jobs as part of a massive green-infrastructure program, affordable housing for all and tuition-free college is the way to undercut the “us versus them” zero-sum xenophobia that Trump espouses.

At the start of 2019, the real force that could push Trump back was revealed when air traffic controllers and flight attendants brought Trump’s “border wall” government shutdown to an end by threatening to shut the airports down. The Democratic leadership however has no interest in rousing the working class into action.

Trump in the White House of course makes the Democrats look like the lesser evil in the eyes of tens of millions. But the truth is that the Democrats, despite their rhetoric, are no friends of black people, immigrants or working people generally. This is the party that brought in mass incarceration on a full scale under Bill Clinton (with some help from Joe Biden in the Senate). At local level the Democrats have presided over institutional segregation and racist policing for decades. Under President Obama, more immigrants were deported than under any previous administration. After the crash of ‘07-’08 the Democrats bailed out Wall Street while millions lost their jobs and homes. This is what helped to open the door to Trump.

It is completely understandable that millions of people are looking to push the Democrats further to the left and trying to remake it as a “people’s party.” But, as we have pointed out, this would mean ending all corporate donations, creating meaningful democratic structures, adopting a pro-working-class program that public officials were required to fight for and paying those officials the average income of the working-class people they represent. The pro-corporate leadership will split the party rather than accept this transformation.

Attention is of course increasingly turning to the presidential primary and the pressure of the base is being reflected there as well. We would urge the members of the squad to join Sanders in building the strongest possible challenge to corporate politics in 2020 up to and beyond the Democratic convention. Sanders should set up democratic structures to involve workers and young people as meaningful participants in his campaign and as a step towards setting up a new political party. Unfortunately, there are no signs that Bernie or AOC and the squad agree with this approach. That’s why it’s vital that left activists, especially socialists including those in DSA who understand the Democrats can’t be “reclaimed,” themselves begin building toward a new left party, especially if Bernie is again undemocratically blocked in the primary.