Bernie Sanders has taken to calling out corporate media for their anti-progressive bias, and their feathers have gotten quite ruffled.

In a campaign event Monday in New Hampshire, Sanders told the crowd:

We have pointed out over and over again that Amazon made $10 billion in profits last year. You know how much they paid in taxes? You got it, zero! Any wonder why the Washington Post is not one of my great supporters, I wonder why? New York Times not much better.

The next day, he returned to the same point:

And then I wonder why the Washington Post, which is owned by Jeff Bezos, who owns Amazon, doesn’t write particularly good articles about me. I don’t know why.

The Post‘s executive editor, Martin Baron, immediately retorted (CNN, 8/12/19) that Sanders was spouting a “conspiracy theory,” insisting that “Jeff Bezos allows our newsroom to operate with full independence, as our reporters and editors can attest.”

Many others in corporate media were incensed as well. NPR‘s All Things Considered (8/13/19) accused Sanders of “echoing the president’s language,” and CNN (8/13/19) ran a segment that likewise accused him of using Trump’s “playbook”; CNN‘s Poppy Harlow warned ominously, “This seems like a dangerous line, continuous accusations against the media with no basis in fact or evidence provided.”

FAIR has been following this issue for quite some time, so we’re happy to offer the evidence CNN and the Post protest is lacking. 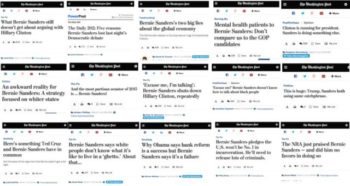 Fifteen of the 16 negative stories on the Bernie Sanders campaign that the Washington Post ran over a 16-hour period (FAIR.org, 3/8/16).

We could start with the 16 negative stories the Post ran in 16 hours (FAIR.org, 3/8/16), and follow that up with the four different Sanders-bashing pieces the paper put out in seven hours based on a single think tank study (FAIR.org, 5/11/16).

Or you could take the many occasions on which the Post‘s factchecking team performed impressive contortions to interpret Sander’s fact-based statements as meriting multiple “Pinocchios” (e.g., FAIR.org, 1/25/17, 3/20/17). In particular, we might observe the time the Post “factchecked” Sanders’ claim that the world’s six wealthiest people are worth as much as half the global population (FAIR.org, 10/3/17). It just so happens that one of those six multi-billionaires is Bezos, which would make an ethical journalist extra careful not to show favoritism.

Instead, after acknowledging that Sanders was, in fact, correct, the paper’s Nicole Lewis awarded him “three Pinocchios”—a rating that indicates “significant factual error and/or obvious contradictions.” This is because, the paper explained, even though the number comes from a reputable nonpartisan source, Oxfam, which got its data from Credit Suisse, “It’s hard to make heads or tails of what wealth actually means, with respect to people’s daily lives around the globe.”

Post factcheckers returned to defend their owner against the charge that he is extremely wealthy after Sanders pointed out in a Democratic debate (6/27/19) that “three people in this country own more wealth than the bottom half of America.” “The numbers add up,” the Post fact squad (6/28/19) acknowledged, but it’s “apples to oranges”:

People in the bottom half have essentially no wealth, as debts cancel out whatever assets they might have. So the comparison is not especially meaningful. 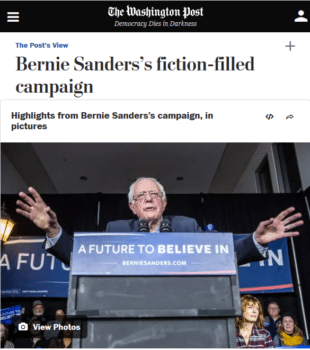 The Washington Post (1/27/16) began its rebuttal to Bernie Sanders’ “fiction-filled” campaign: “Here is a reality check: Wall Street has already undergone a round of reform.”

But even in the occasional straight news reporting that manages to acknowledge Sanders’ success, the paper’s reporters still slip in digs at the candidate, such as a news report by Karen Tumulty charting Sanders’ strong caucus showing in Iowa in 2016 that told readers that his showing indicated “Republicans are not the only voters looking for qualities beyond experience and electability.” (With eight years as Burlington mayor, 16 years in the House and a Senate tenure that began in 2007, Sanders has more political experience than most presidential candidates, whether in 2016 or 2020, and electability, rather obviously, ought to be determined by voters, not journalists —FAIR.org, 2/2/16.)

And sometimes the digs are clearly deliberate, as when a Post political correspondent essentially admitted to trolling the Sanders camp by intentionally choosing a “provocative” headline—”Bernie Sanders Keeps Saying His Average Donation Is $27, but His Own Numbers Contradict That”—over a piece that revealed the scandalous deception that the actual number was $27.89 (FAIR.org, 4/24/16).

There’s an underlying dismissal of Sanders as a serious candidate, in both the Post‘s editorializing and its nominally straight reporting, that results in pieces like the ones saying the large crowds Sanders drew to his 2016 campaign rallies “don’t matter much” (FAIR.org, 8/20/15), or the ones accusing him of lacking political “realism” (FAIR.org, 1/30/16). And there’s a clear antipathy at the paper to many of Sanders’ signature policy plans, like Medicare for All (FAIR.org, 3/20/19, 6/25/19).

In her CNN segment about Sanders’ critique, Harlow insisted to one of her guests, Britney Shepard of Yahoo News, “It’s important to note, the Washington Post has done really critical reporting of Amazon, too.” Shepard’s response:

Curiously, the same journalists so incensed about Sanders’ lack of evidence about the Post‘s bias failed to offer any of their own about the paper’s “critical reporting” of Amazon. They’d be hard-pressed to find any. In 2017 FAIR’s Adam Johnson reviewed a year’s coverage of Amazon in the Post, the Times and the Wall Street Journal, and found that across 190 stories, only 6% leaned negative, and none were investigative exposes (FAIR.org, 7/28/17).

Nearly half (48%) of the Post‘s coverage was uncritical—meaning it didn’t even adopt the standard journalistic practice of seeking out critical or contrary third-party voices, instead reading like an Amazon press release. (My favorite: “An Exclusive Look at Jeff Bezos’ Plan to Set Up an Amazon-Like Delivery for ‘Future Human Settlement’ of the Moon,” with a picture looking up at a Bezos in shades gazing off proudly into the distance.)

But note the Post wasn’t alone in its fawning coverage. That’s why Sanders called out the Times as well, and why NPR, CNN and their ilk are so upset. It’s not a conspiracy theory, because Bezos doesn’t have to tell the Post how to report to get the kind of coverage he wants. It’s baked into a system in which journalists with a working-class perspective or critical of the corporate status quo get weeded out.

As Hill TV (and former MSNBC) journalist Krystal Ball (8/14/19) trenchantly responded to the media pushback against Sanders’ critique, reporters know which stories will endanger their access to the establishment sources  so valued by their employer, and which will earn them praise and access. Those inclined to pursue those establishment-friendly stories rise up in the ranks, while most of those with more critical perspectives eventually move on. So, no, they don’t need Bezos to tell them what to do—their worldview is neatly aligned with his already.