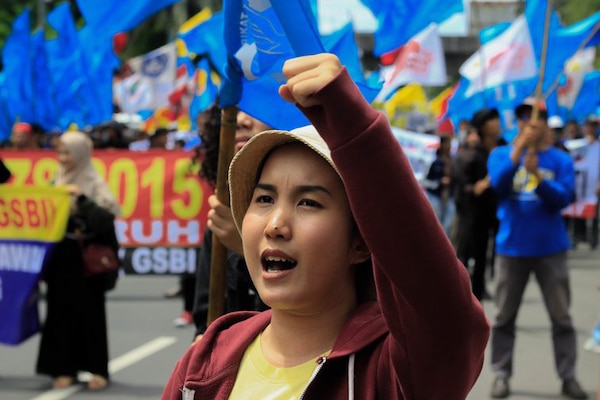 This article is part of ourEconomy’s ‘Decolonising the economy‘ series.

Fast Retailing, the Japanese company behind the clothing brand Uniqlo, is “the second-largest apparel maker by market value” behind the Spanish company Zara. In 2015, the operating profits of Uniqlo Japan alone experienced a 10.3 percent growth. In 2018, the firm’s shares “surged more than 75 percent over the past year,” and the wealth of the company’s CEO, Tadashi Yanai, had reached $25.4 billion—double the amount in 2016. All this was due to “steady expansion in overseas markets and endorsement deals with tennis star Roger Federer and golfer Adam Scott.” Uniqlo indeed has great ambitions, positioning itself as an “influential player in the fashion industry,” face to face with its established European competitors.

Within the same period, two thousand Indonesian workers that sewed Uniqlo products were laid off with unpaid wages and no severance payments. Their employer, an Indonesian supplier for Uniqlo, went bankrupt in 2015, reportedly after the multinational stopped its orders due to “quality issues.” The supplier was also reported to have engaged in labor violations, including unpaid overtime and union busting. These workers demanded that Uniqlo take responsibility and pay the $5.5 million debt of back wages and severance payments. In November 2018, Uniqlo agreed to meet with workers’ representatives only to reject any form of concrete responsibility. In contrast to the increased wealth of Yanai and deals secured by Federer and Scott, the workers got nothing. The reason for the refusal is a classic one: Uniqlo claimed that it had no legal obligation to fulfill these workers’ demands, since the fault was that of its supplier, and not its own.

Over the last few decades, since the practice of arm’s length contracts, in which multinationals subcontract their production to dependent suppliers abroad, came to characterize global commodity chains, cases like this have been all too common. After all, contemporary globalized production is designed to be highly mobile, so that it can be rapidly shifted elsewhere whenever there’s a rise in unit labor costs where production happens.

Recently, due to increased pressure from workers, unions, and organizations that support them, some of these cases, in which suppliers’ factories were closed abruptly and their workers were abandoned, have resulted in multinationals paying workers’ unpaid wages and severance payments in the form of “charitable funds,” sometimes even providing them with vocational training or different employment. But whether or not multinationals decide to compensate these workers or turn a blind eye—as they often do—in the face of such depredations is not the only issue. At their core, cases like these are not merely about whether there were violations of labor practices or of companies’ codes of conduct. Rather, they reveal a deeper problem: the intricate imperialist relations that characterize the capitalist world economy.

How do we see these relations? If we look at unit labor costs—typically presented as the average cost of labor per unit of labor output—we can get a picture of how global commodity chains, or what I call global labor-value chains, work. Combining a measurement of wages and productivity, recent unit labor costs data show that the countries with the highest participation in global labor-value chains—the top three being China, India, and Indonesia—also have very low unit labor costs. The same goes for other countries in the global South, including Mexico, which has experienced a sharp decline in unit labor costs relative to the United States within the 1995-2014 period, reflecting two decades of labor flexibilization.

This means that not only are wages low in these countries, but productivity is high. This results in much higher profit margins for multinationals—usually headquartered in the triad (United States, Western Europe, and Japan)—with the additional value generated often credited to production in the countries in which these multinationals are headquartered. The overall process is one of the amassing of wealth in these Northern countries, through a form of unequal exchange involving value capture.

But how do these seemingly abstract, macro workings of the world economy relate to the misery of Indonesian workers sewing clothes for Uniqlo? Global labor-value chains lead to mechanisms of production that benefit multinationals, which largely control these chains, mainly through the management of their labor—a process often carried out by suppliers with whom multinationals subcontract. But unlike what is commonly believed—that this misconduct is to be attributed entirely to the subcontractors for which the multinationals have no direct responsibility—these globe-spanning mega-corporations are in fact active players in the exploitation of these workers, although this involvement is often hidden beneath a series of processes seen as “business as usual,” and sometimes disguised as “fair business practices” in the form of international standardizations.

From my case studies of Indonesian suppliers that cater to multinationals that produce fast-moving consumer goods, it is clear that there are several control mechanisms that occur within global labor-value chains, and they are usually two-tier. (These suppliers are far from the sweatshop stereotype that usually deals with companies that make apparels like Uniqlo, but as we will see, they are subject to the same processes.) First, multinationals place strict conditions and often unreasonable demands upon their suppliers and, second, such conditions and demands lead to the reorganization of work in these suppliers’ factories, enhancing exploitation of their workers.

The result of this study can be read in my upcoming book, Value Chains: The New Economic Imperialism, but the general picture is as follows. Having multinationals as clients is often regarded as highly prestigious for suppliers in the global South, partly due to decent profit margins and stable volumes, but mainly because it serves as a ticket to a “VIP” status, which promises them better business deals and large repeat orders. Therefore, a lot of suppliers are more than willing to fulfill multinationals’ demands even though they are often unreasonable and lead to continuous difficulties in their production process.

And these demands are mostly delivered not through direct threats (although these also exist), but through the imposition of systemic rationalization and flexible production—corporate strategies that began in the 1970s (some argue mid-1980s) and are continuously maintained by new information technologies, aiming at establishing production, administration, and distribution processes that are more economical and characterized by greater flexibility.

For example, due to the imposition of delivery on demand by multinationals, suppliers are pressured to implement what they call a buffering policy. Meaning, it is imperative that these suppliers get their finished goods ready and store them in their warehouses, to be sent only when their multinational customers need them. Not only do these goods have to be shipped whenever the customers demand them, but the supplier also must be ready to accommodate any sudden increase or decrease in product demands missed in the customer’s initial forecast. At one of the suppliers I studied, they created a policy to accommo­date up to twenty percent increase or decrease of their top customers’ needs. This creates a series of problems, especially in relation to high costs due to storage (both of finished goods and of raw materials) and the problem of accommodating changes in production processes, which often creates huge waste—both waste of products and waste of labor—on the suppliers’ end.

How does this benefit multinationals? Multinationals outsource their production to externalize the costs resulting from flexible produc­tion to accommodate fluctuating market demands. This way, their profit rate is not at risk. Multinationals do not want to place the totality of this burden on themselves or on their own subsidiaries, since that way they must pay the price. Thus, they transfer a large part of this burden to their suppliers. This fact alone disrupts the supplier’s productivity and efficiency, and as a result, they have to constantly face conflicts within their own management, as well as change their organization of work in ways that can offset the loss resulting from this wasteful production.

In the end, through this reorganization of work, the exploitation of workers is intensified. Such a reorganization of work usually includes strategies that can force workers to increase their productivity while stalling wages. One way to do this is by limiting overtime work. Multinationals make sure that their suppliers comply with national regulations limiting overtime, monitoring these dependent companies in this and other respects through third party organizations that audit the suppliers and issue standardization certificates. The problem is, multinationals’ demands for flexible production often force suppliers to demand workers to work longer hours. One way to get out of this problem is to force workers to work more productively, and suppliers do this through various means, including increasing strict, direct control of labor on the factory floors, as well as applying an incentive system and a specific measurement of individual or group performance that would reward “productive” workers and punish those who fail to achieve production targets.

The continual reorganization of work implemented at the point of production, with the goal of catering to the requirements demanded by multinational clients, in the end becomes a significant mechanism within labor-value chains facilitating the extreme exploitation of labor in the global South by the North. Multinational clients gain advantage from management policies and practices conducted by the bosses in the dependent companies. All these practices are enabled by the deskilling of work that has transformed workers into “mere executors” of work and thus made them vulnerable.

Returning to the Uniqlo case, then, it may be true, as the company claimed, that it does not have any legal obligation to cover their suppliers’ losses or to compensate their laid-off workers. But as the actor that holds the most control and power within the chains, constituting the beginning and end of the chain, the company behind Uniqlo is directly responsible for these workers. Not merely in terms of “moral responsibilities” or “business ethics” or compliance with their codes of conduct, but in a perspective that takes into account the whole exploitative process that occurs in global labor-value chains, where multinationals can directly and indirectly control how production takes place in their suppliers’ factories, and how labor should be managed by demanding that suppliers lower their costs and increase their workers’ productivity.

This process in which capital in the global North can exercise control over global South labor shows the fallacy of the claim that these intricate global chains of value are characterized by a decentralization of power. Rather, this is a system of balls and chains in which the Northern capital is in a commanding position. Enforcing inequality, such chains are characteristic of our present world economy. This phenomenon is not an inevitable, neutral outcome of “globalization,” but a new phase of imperialism, used by capital and its state instruments to put forward, in Samir Amin’s words, a “set of demands by which they exert their control over the productive systems of the periphery of global capitalism.”

Imperialism, in other words, is alive and well. It may take new forms, but is as nefarious as ever.

Intan Suwandi is author of Value Chains: The New Economic Imperialism, forthcoming from Monthly Review Press, August 2019. She is a frequent contributor to Monthly Review magazine.