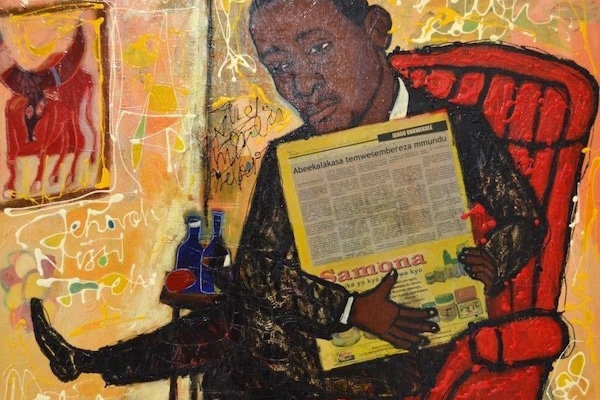 Dear Friends, Greetings from the desk of the Tricontinental: Institute for Social Research. 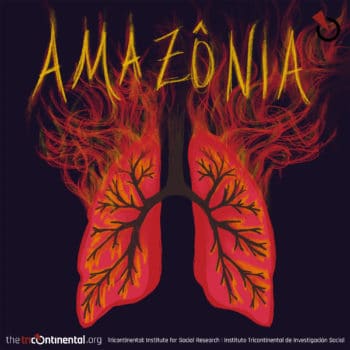 In Brazil recently, I gave an interview to Brasil de Fato, which was born in 2003 as the weekly magazine of the World Social Forum. It is now one of the most important windows into Brazil’s political world. The newsletter this week carries the text of most of the interview.

Brasil de Fato: The first question is about the image of Jair Bolsonaro’s government around the world. You travel a lot; you are a journalist. We would like to know how the international press views the Bolsonaro phenomenon. What aspects of his government have been the most talked about around the world?

Vijay Prashad: Well, I think the first thing to seriously look at is that people like Bolsonaro are seen as slightly comical. There is a narrative that has developed about the comical nature of contemporary heads of government: Boris Johnson, Donald Trump, Bolsonaro. He is part of this sort of rogues’ gallery of comical characters.

Dossier no. 14- Brazil’s Amazon- The Wealth of the Earth Generates the Poverty of Humankind.

But there is something that has alarmed people. Not only the liberals, but even others. There are two major carbon sinks in the world. One is on the island of Papua, both West Papua and Papua New Guinea. And the other is the Amazon. And I think it’s really quite chilling for people that Mr. Bolsonaro has decided to open the Amazon to the logging industry and so on. He has basically allowed logging and food lobbies to create policy. And I know that even in a newspaper like The New York Times, there was quite a strong story about Bolsonaro’s Amazon policy.

It is one thing to say that Bolsonaro is comical and has got terrible social positions. But when you start to destroy the Amazon, that has implications for the whole planet. So that is actually something that sensitive, decent–and also not so sensitive people–are quite worried about.

In the last decade, the term BRICS [Brazil, Russia, India, China, South Africa] has become popular in Brazil. These countries began to articulate themselves and threaten U.S. hegemony in the international scene. Is it possible to say that the election of Bolsonaro, who is so close to Trump, can dismantle this organisation?

We should never exaggerate groups of nations. When they come together to create some kind of grouping, we should not exaggerate what it is. BRICS was always going to be only as good as the class character of the government in the different States. 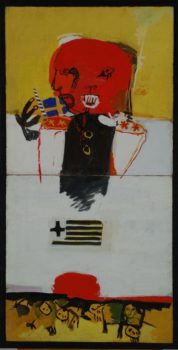 Dimosthenis Kokkinidis, And regarding the remembrance of evils, July 1967.

Before BRICS, when India, Brazil, and South Africa formed a bloc, it was called IBSA. It still exists. At the time, the governments in India, Brazil, and South Africa were relatively social democratic. They pushed an agenda for pharmaceutical drugs and for farm subsidies. The point was that they were worried about the fact that people couldn’t access drugs–medicine–and that the farmers in their countries were being badly hit by trade policies. At the time, they were social democratic, in 2003, when IBSA was formed.

When BRICS was created in 2009, it already had three agendas. One agenda they drew from IBSA was to fight for better trade agreements, to protect farmers, and so on. The second one was for a limited kind of multilateralism. It was just that the elites of Brazil, India, South Africa, China, Russia should have a place at the table. That was the second goal of BRICS. The third goal of BRICS was South-South business cooperation: Indian businesses with Brazilian businesses, Brazilian exports to South Africa and so on.

BRICS was always limited by the class character of the governments. Businesses in Brazil want to enter markets in India. BRICS is not going to dissolve. People just think BRICS is a political instrument, that idea of multilateralism. But that’s a very wrong approach to BRICS. BRICS is not just a political instrument, it’s for business in this part of the world, militaries, arms deals, all kinds of things. They are not things that you and I are going to be happy with.

The advancement of the far right in different regions has imposed an interesting debate on the use of the term ‘fascism’. There are theorists who say that fascism occurred in Italy in a specific 20th century context and can’t be compared with any other government or regime. Other analysts say that the similarities are so great that it is impossible to call them by any other name. How do you position yourself in this discussion? Should we call them fascists or not? Or should we not worry about those terms now?

These debates are important. The issue is not to have the right analysis by yourself. The issue is to have a debate to clarify how we understand the current situation. The reason why we go back and look at the 1920s and 1930s is because we want to understand what authoritarianism within democracy looked like then. Because, after all, [Benito] Mussolini and [Adolf] Hitler came to power through democracy, through the ballot box. And then they deepened the authoritarian role of politics in society.

But the context that produced Hitler and Mussolini, the fascists and the Nazis, was very different from the context now. Then, their main assignment, as it were, from the capitalists, from the bourgeoisie, was to come to power and smash the workers’ movement. That was the main assignment of classical Nazis and fascists in the early 20th century. Today, workers’ movements are much weaker. The assignment from the bourgeoisie is not, ‘hey, fascist, come back to power and destroy the workers’ movement’. It’s not the same situation. It’s wrong to argue by analogy, saying that ‘now we have leaders that say terrible things, they want to lock up journalists, it’s similar to then, therefore it’s the same’. No. Let’s look at the current context for what it is.

So, we have less powerful peasant and workers’ unions now. That created a combustible situation where the bourgeoisie was getting wealthier and wealthier in this period. Thomas Piketty has the data to prove what we already know: there is immense inequality. The bourgeoisie is highly worried about the rise of inequality, the potential that some sort of unrest is going to come. We saw riots break out against the elite–food riots, the Caracazo in Venezuela.

At that point, you see a sharpening of a right-wing turn in ideology, where the elite starts to target certain populations, feminists, minorities, refugees, migrants, and say it’s because of them. ‘You don’t have a job because of a migrant’. It was the neoliberals that actually introduced these ideas into the political discourse to maintain control over the system.

But the neoliberals exhausted themselves. Everybody knows they were responsible for inequality; they were responsible for degradation. And it’s at that point–the left being so weak–that the right appears, the far right, the authoritarian right. And they take what neoliberals introduced. Neoliberals said, ‘we shouldn’t allow too much migration, it’s going to destroy our jobs’. So, they took that to its extreme and made it really vicious and nasty. And they came to power.

The way I understand the growth of these neo-authoritarians, these neofascists, is that they are not conventional 20th-century fascists. There is something quite different. They actually don’t need to destroy the institutions of democracy. They are merely hollowing them out. You still have elections, you still have parliaments, you still have all this stuff. They don’t need a dictatorship, because they’ve hollowed out the concept of democracy. So, by authoritarian and ideological means, they empty democracy, they empty the press, they empty the ability for people to have discussions, and that is how they create this very right-wing viciousness.

So, it’s different from the early 20th century. There is something to learn from that in order to sharpen our analysis, but we need to have an analysis of the concrete conditions of this period. 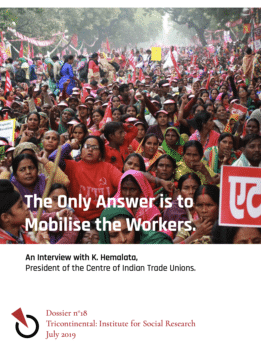 Dossier no. 18. The Only Answer is to Mobilise the Workers.

A dossier published in July by the Tricontinental Institute showed that the level of informality of workers in India is close to 90 percent, and unionisation rates are very low. Here in Brazil, trade unions have been the target of many attacks by the last two presidents. Is it possible to think of organising labor movements fighting for their demands outside the union structure, outside the trade union? Is there an alternative outside this formal organisation structure?

The point of unionising or building trade unions is not to build a union. The point of this whole struggle is to build the confidence and capacity of workers and peasants. The goal is not to have a trade union. It is to have an organised working class and peasantry that is able to challenge the bourgeoisie politically. That is the point. Just having a union is not enough.

We understand that unions are very important, but they are not the goal. Unions are merely a form to strengthen the power of the working class. Unions have understood that it is getting harder and harder to organise workers at the point of production. Factories have become like prisons. The workday is so highly regimented, it’s like a barracks in there. You can’t go to the bathroom, can’t look up from your desk, can’t talk to each other. If you look at today’s factories, they are really ruthless constructions of hyper-productivity. Because of that difficulty, the unions have started to think, ‘let’s organise workers where they live’. Because the point is to organise workers. Now, if you organise workers where they live, then they can take the fight to the factory. You were not able to organise them at the factory gate, so unions are becoming very creative about how they are building worker power. And that’s what we need to start looking at: opportunities to build the power of workers and peasants.

Dossier no. 18. The Only Answer is to Mobilise the Workers.

Unions are experimenting with new processes. That’s why we are interested in looking to see, what are unions doing and where are they doing it.

I was at the Curitiba [Free Lula] vigil a few weeks ago, and they asked me to give a talk. I gave a talk saying that democracy is in prison. Lula is a human being. Lula led a government when there was a certain balance of class forces at the time of his government. The question isn’t–do you like Lula? Do you not like Lula? This is a ridiculous discussion. The real question is that the assault on Lula’s right to run for the presidency was an attack on democracy. And that’s how we have to understand it, and that’s how we have to explain to people that it’s happening all around the world.

Democratic processes are essentially being destroyed in the service of having a very limited form of elite government against the people. That’s the basic issue.

PS: our newsletters are now available in Greek and Tamil (as well as in English, French, German, Portuguese, Russian, and Spanish).