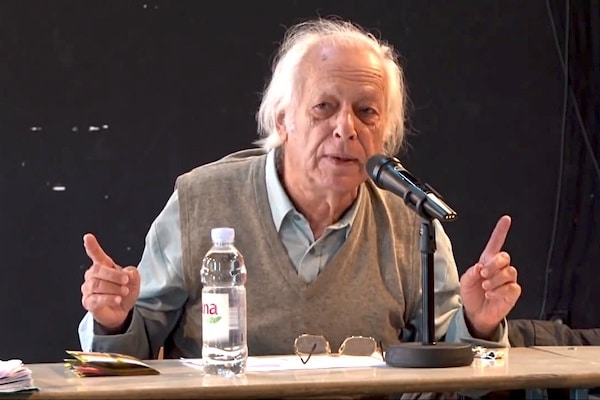 Samir Amin at the 2012 Subversive Festival in Zagreb. Source- Wikicommons.

With the passing of the great anti-imperialist and Marxist intellectual Samir Amin on August 12 of last year, the international communist movement lost a giant. Samir Amin’s life and works exemplify what it means to be a revolutionary and an intellectual in today’s world. He was an intellectual whose works were not geared towards the academy, but towards the work of collective liberation of humanity from the yoke of capitalism and imperialism. Amin may be gone, but the voluminous works that he left behind, the problems that he posed to the international communist movement, and his championing of the absolute necessity for historical and dialectical materialist analysis have left an undeniable mark on our movement.

Born in Cairo in 1931, Amin was raised by his mother, who was French, and his father, who was Egyptian. After completing secondary school, he joined the Communist Party in Egypt. Amin moved to Paris in 1947 where he earned his Bachelor’s in political science and his Doctoral degree in political economy, and joined the Communist Party of France. Amin moved back to Egypt in 1957 to work for the Institute of Economic Management in Cairo before leaving Egypt for Dakar, Senegal, where he eventually became the director of the Third World Forum.

Amin was no “academic” intellectual who produced theory meant to remain in the ivory tower. Amin was a revolutionary Marxist; he was a thinker, in the long line of thinkers that dared to give their life to the struggle for socialism and national liberation. His texts were translated into many languages, most frequently Chinese and Arabic. In our era of global counter-revolution, in which the international communist movement is slowly regrouping and recovering, Amin remained a steadfast Marxist and communist. Following the collapse of the Soviet Union and the Eastern Bloc workers’ states, the narratives of “capitalist triumphalism”–such as Francis Fukayama’s “end of history” thesis–dominated. But, communism is not a “state” nor even a “state of affairs” and could never be entirely hinged on a single government or bloc of states. Communism is the praxis of liberation from oppression and exploitation. As young Marxists, born in the 1990s, we witnessed the era of unipolarity and capitalist triumphalism. After the collapse of “actually existing socialism” in the Soviet Union, we are forever indebted to comrades like Amin, who helped carry on the continuity of revolutionary Marxist thought.

A people’s scholar of the global south, Amin challenged the imperialist presentation of the world order. Amin studied the processof capital accumulation that created and accelerated the division between the advanced capitalist countries—specifically, what he labeled the “imperialist triad” of the US, Europe, and Japan—and the so-called “underdeveloped” countries. These countries in the global south were driven into poverty and were subjected to the parasitic policies of global financial institutions anchored by the advanced capitalists: the International Monetary Fund and World Bank. Amin adapted and extended the Marxian law of value to the law of worldwide value, which placed the law of value within the context of globalized capital. Counter to the narratives put out by the triad, Amin notes that capitalism has no solution to the very problems it created. He writes in In the Implosion of Contemporary Capitalism:

“The “crisis” of the system is due to nothing other than its own “success.” To this very day the strategy implemented by the monopolies has consistently produced its intended effects: “austerity” plans are still in effect despite all resistance. To this very day the initiative remains in the hands of the monopolies –”the markets”– and their political servants the governments, whose decisions are determined in submission to the demands of the markets. The system of generalized monopolies has entered on a crisis proving its incapacity for stable development.”

In one of his most well-known texts, Eurocentrism, Amin challenged the idea that the European West is the only site of “scientific spirit, rationality, practical efficiency,” the only world of tolerance, diversity of opinions, and recognition of human rights, and thus that countries in Asia, Africa, and Latin America can only progress by emulating the West. Moreover, it was not a miracle or the superiority of Europe that catapulted them out of feudalism and into the capitalist mode of production. Amin was critical of the theory of development that was constricted to five distinct, ordered stages: primitive communism, slavery, feudalism, capitalism, and finally socialism and communism. In keeping with Marx’s thinking on the matter, he rebuked the notion that socialism followed a hard and fast linear trajectory.

Eurocentrism in the 21st century manifests as a means of justification for the United States’ drive for economic and political hegemony throughout the world. In the era of “Human Rights Imperialism,” Amin’s critiques in Eurocentrism remain critical for challenging the racist discourses used by the U.S. government and the bourgeois press to demonize Palestinians protesting apartheid Israel, or to rally support for imperialist interventions in Libya, Syria, Iran, and the Democratic People’s Republic of Korea (DPRK, or North Korea).

Amin insisted  that Marxism is not a “complete and ready made system” with a definite set of answers to all things under the sun. At its most fundamental, Marxism is a methodology, a science to be developed and applied creatively to concrete situations. As he wrote in Modern Imperialism, Monopoly Finance Capital, and Marx’s Law of Value:

“To be a “Marxist” is to continue the work that Marx merely began, even though that beginning was of an unequaled power. It is not to stop at Marx, but to start from him. For Marx is not a prophet whose conclusions, drawn from a critique of both reality and how it has been read, are all necessarily “correct” or “final.” His opus is not a closed theory. Marx is boundless, because the radical critique that he initiated is itself boundless, always incomplete, and must always be the object of its own critique (“Marxism as formulated at a particular moment has to undergo a Marxist critique”), must unceasingly enrich itself through radical critique, treating whatever novelties the real system produces as newly opened fields of knowledge.”

This is particularly salient for Amin’s analysis of the People’s Republic of China. As the US and its allies ramp up economic, military, and political pressure on China, Amin’s perspective can provide us with important insights. And even those aspects of his thought that we ultimately disagree with can nonetheless help us bolster our arguments and thinking on the matter.

Although he rejected the division of China’s socialist project into “Maoist” and “post-Maoist” periods, he held that China’s “opening up,” beginning in 1978-1980, followed by its controlled integration into “globalization” in the 1990s created a political opening for right-wing elements in China and a rightward shift in their own Communist Party. China’s economy is also at risk of being affected by the twists and turns and booms and busts of globalized capitalism if this integration is not sufficiently controlled. Despite the risk, China was largely unaffected by the 2008 financial crisis, unlike many “emerging” capitalist countries. On the other hand, as Amin points out, through the import of foreign capital (albeit on conditional terms), China has developed modern technologies that were previously inaccessible, raising their productive forces and capacity to new heights. The path of socialist construction has not been abandoned, he says. The decisions that are being made, which certainly have their downsides, are being carried out under the watchful eye of a Communist Party with mass support.

Thus, it wasn’t capitalist restoration that accounts for China’s rise. If it were, as some bourgeois economists argue,  then would not countries like India, Brazil, and South Africa enjoy some of the same gains? These countries have, on the contrary, been devastated by capitalist globalization. This is because they are not “emerging countries”, but “emerging markets.” In other words, they emerge as appendages to the imperialist world order rather than as their own sovereign entities.

According to Amin, since “opening up,” there has been a general depoliticization in China. He argues that the rise and success of the new development policies and China’s position within the world economy “strengthens the spontaneous tendency” to move to the right. Balancing development while retaining the political integrity and socialist orientation of the country and its people is, according to Amin, the challenge China faces. Nevertheless, these risks are calculated and these challenges can be overcome as long as China and the CPC stay committed to socialist development. Amin referred to the growing hostility towards China, particularly in the west, as “China bashing:”

China bashers seem to think that the mass construction of housing for the working class is nothing but the abandonment of workers to slums and liken “inequality” in China (working-class houses are not opulent villas) to that in India (opulent villas side-by-side with slums), etc. China bashing panders to the infantile opinion found in some currents of the powerless Western “left”: if it is not the communism of the twenty-first century, it is a betrayal! China bashing participates in the systematic campaign of maintaining hostility toward China, in view of a possible military attack. This is nothing less than a question of destroying the opportunities for an authentic emergence of a great people of the South. (The Implosion of Contemporary Capitalism)

Any serious analysis of China must take into account its specificity: what particular challenges did they face historically and what challenges do they face now? From where did they originally emerge: A highly developed productive system and educated working class or from semi-feudal property relations and colonial underdevelopment? The progressive movements across the world and particularly in the US, where the bourgeoisie trumps out an endless barrage of accusations against China, would benefit from studying Amin’s thorough and optimistic outlook on it.

On the one year anniversary of Samir Amin’s death, the Party for Socialism and Liberation remembers and honors his legacy as a revolutionary communist intellectual. Amin’s works were in service of oppressed people around the world. He teaches us a key lesson in a time when it is easy to default to cynicism: that the current prevailing social and economic order, with all of its inequality and oppression, is not inevitable.