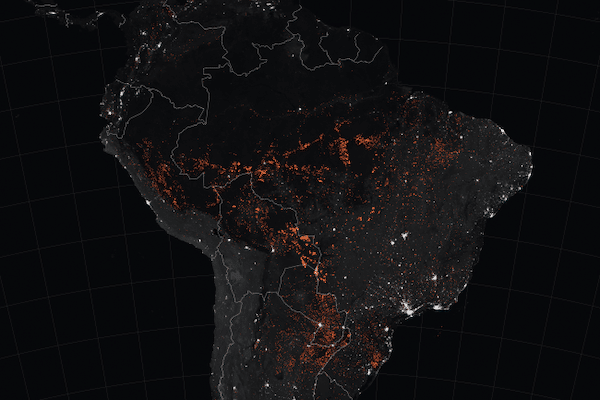 Satellite data in late August painted an apocalyptic picture of South America. Pinpricks and clusters representing the fierce forest fires engulfing the heart of the continent stretched in all directions, ignoring national borders.

Fires in the Brazilian Amazon spiked by at least 35 percent compared to the previous eight years, with blazes also arcing into the Cerrado savanna. Choking banks of smoke descended on cities in Peru’s portion of the rainforest—where fires doubled from 2018 levels—mirroring the ominous clouds that plunged São Paulo into darkness 4,000km away. Fires also spread among the Pantanal wetlands and the vast Chaco forest shared between Bolivia, Brazil, and Paraguay, setting at least 40,000 hectares of vegetation alight, and further hemming in fragile Indigenous populations like the Ayoreo and Yshir, already cornered by the advance of agroindustrial deforestation.

But perhaps the most hellish scenes are still ongoing in the Chiquitano region, a vast transitional zone of dry forest in eastern Bolivia linking the Amazon and the Chaco, and sometimes classified as lying within the Amazon biome. Here, 782,000 hectares were set aflame in August alone, adding up to over one million in 2019 so far—nearly triple the annual average rate of recent years. As in Brazil, Paraguay, and Peru, the damage to fragile vegetation and endangered wildlife will likely be untold, with local environmentalists reporting that affected areas will take centuries to recover.

Organizations like the Coordinator of Indigenous Organizations of the Amazon River Basin (COICA)—which represents the Amazon basin’s three million Indigenous people—were quick to perceive that the threat transcended territorial and political divisions. In an open letter, the group blamed the governments of Jair Bolsonaro and Evo Morales “for the disappearance of and physical, environmental, and cultural genocide in the Amazon, which through their actions and inaction worsens every day.” The respective presidents of Brazil and Bolivia, it continued, were no longer welcome in the rainforest, having repeatedly demonstrated “their racism and structural discrimination against indigenous peoples, and only looking to favour the interests of major economic groups that seek to parcel up the Amazon for agroindustrial, mining, and hydroelectric megaprojects.”

But international coverage has been slow to look beyond the Brazilian Amazon, and adopt a similarly wide-lens, structural view. To do so is not to draw a false equivalence between Morales, the Aymara former coca leaf grower, or Bolsonaro, the nationalist ex-paratrooper. Rather it is to accept, as Uruguayan ecologist Eduardo Gudynas writes, that “we face a situation where all political ideologies seem incapable of putting out the fire,” a grim panorama in which fires are raging in all the major tropical and subtropical ecoregions of South America, “in the jungles, the dry forests, the savannas and grasslands, and even in the Pantanal.” Understanding the commonalities across borders is the first step towards building strategies to help support South America’s forests and their peoples.

Fires across the continent in the period between August and October are customary, but not natural. Farmers typically use the dry season to set less valuable, already-felled wood ablaze, clearing the space for cattle or planting. In Bolivia, this practice is known as chaqueo—a traditional, low-tech process with dubious benefit to the soil. But in both Bolivia and Brazil, many of the hundreds of thousands of individual fires were started in or spread to primary forest itself. The true damage may be even higher as blazes beneath the forest canopy are harder to detect by satellite. And in both countries, the unusually severe scale of fires corresponded to direct government encouragement. Bolsonaro’s aggressive dismantling and defunding of much of Brazil’s environmental enforcement infrastructure seems to have spurred some farmers to organize a “day of fire,” burning forest to show their willingness to advance the agricultural frontier. In Bolivia, environmentalists point to at least six presidential decrees and four new laws passed by Morales in the past six years that expand agricultural use of forests, with deforestation leaping by 200 percent since 2015. Morales also defended the fires started by smallholders—many of them poor Andean migrants and a key part of his support base ahead of elections in October—as essential for their survival, and his government has been slow to accept international assistance.

This month’s surge in fires is perhaps the most eye-catching moment in decades to have demonstrated the vulnerability of South America’s forests. But as the letter from COICA noted, there are many more long-term and insidious factors at work. Conventional logging, the piecemeal expansion of agricultural land for soybean and cattle ranching, drought and localized climate change, migration and urbanization, and the massive infrastructure and hydroelectric projects pursued by administrations on the left and right have all contributed to the destruction of nearly 20 percent of the Amazon in just five decades. This complex array of factors behind the disappearance of vital primary forests across South America, Amazonian and otherwise, requires hard thinking about how other countries, international and non-governmental organizations, and individuals can respond effectively.

The stakes are extremely high. The Amazon is not the source of 20 percent of the world’s oxygen, as has been erroneously claimed by the UN General Secretary and French president Emmanuel Macron. But it is vital as a source of unique biodiversity, a regulator for the global climate, and a huge carbon sink. Scientists believe that deforestation is on the precipice of a “tipping point” whereby the entire jungle will irreversibly transform into sparse savanna. Protecting the Amazon and its adjacent forests is the keystone of any serious effort to mitigate the worst effects of global climate change.

But heavy-handed lecturing, or even open pondering of military intervention, only fuels nationalist fears for Brazil’s sovereignty, providing cover for Bolsonaro’s bad-faith claims that environmental NGOs may have been behind the fires, and his refusal to accept outside help. Token, one-off donations like the $20 million offered by the G7 group of countries will also do little. Instead, programs like the Amazon Fund, which has funnelled over $1 billion into environmental measures since 2008, should be reinforced with conditions: Norway and Germany suspended $70 million in cooperation in August. If national governments refuse the terms, such funds could be channelled through local governments, as nine Brazilian states have recently suggested, or through trusted multilateral organizations, local communities, and home-grown NGOs. Meanwhile, serious progress on rewilding and decarbonizing among global north economies will strengthen their limited moral authority when it comes to helping other countries protect their forests, as well as benefiting the global climate.

As individuals, eating less or no red meat—a major motor for the destruction of forests worldwide, both for cattle and animal feed—is also an option. But conscientious Western consumers may have less leverage than they think. The U.S. blocked imports of fresh beef from Brazil in 2017 over safety concerns. Most of the destruction in Bolivia’s forests yields products bound for China. Dissecting complicated supply chains and bogus, industry-set sustainability certificates for products including palm oil, charcoal, and hardwoods is also important, but harder to scale up into society-wide change.

In this context, trade agreements like the decades-in-the-making E.U.-Mercosur deal announced in June should be carefully scrutinized, not rejected or accepted out of hand. While there are environmental risks of a greater expansion in South America’s agricultural frontier, others point to the green and human rights standards that need to be met and regularly inspected under the terms of the treaty. France and Ireland have signaled that the deal will not go ahead unless Brazil honors its commitments to the environment. Finland has similarly suggested restricting Brazil’s beef exports to the E.U. following the fires. Yet if South America is instead forced to deepen its trading relationship with China or the U.S. of Donald Trump, such caveats and safeguards will likely be far weaker.

Fundamentally, however, any attempt to help protect South America’s forests needs to reckon with the people who live there. European diseases and invasions decimated the Indigenous civilizations of the Amazon. Today, after centuries of settlement and state-sponsored colonization, the Amazon basin is home to some 30 million people spread across a handful of major cities and hundreds of smaller towns, villages, and Indigenous reserves. This predominantly poor, Afro-descendant and mixed-heritage population will only grow. How can their material demands, channelled by governments keen to extract political and financial benefit from developing the rainforest, be balanced with the need to protect the Amazon?

A potential clue can be found in the history of the rainforest, which a thousand years ago was no pristine, virgin forest, but rather home to multiple and complex urban societies. To travel through the Amazon today is to see remnants of ancient geoengineering everywhere, from thick banks of terra preta (fertile anthropogenic soil) to the fruit and palm trees themselves which—a growing scientific consensus holds—were planted and domesticated by pre-Columbian peoples. The biome comfortably sustained several million people in the centuries prior to 1492 without combusting or collapsing. This careful coexistence between human society and the environment relied on methods and knowledge still preserved by Indigenous peoples across the rainforest today. If their voices are foregrounded, a glimmer of a way forward might be found.

Experiments like Indigenous-owned, sustainable fruit plantations in the state of Acre in Brazil’s Amazon are already offering an alternative vision of ecological production. At the other extremity of the forest, in Belem do Pará, respected research institute Imazon is evaluating how ancient agroforestry techniques can be used to generate livelihoods without degrading nature. Improving the efficiency of land already devoted to agricultural production and encouraging reforestation on low-yield land, strengthening community-led fire prevention, and incentivizing migration away from the Amazon basin by creating opportunities elsewhere, can play a role. Shifting the Amazon’s urban centres towards the knowledge economy and services and away from the production of primary products will also reduce their burden on their surroundings.

And above all, Indigenous peoples in properly demarcated and protected reserves are proven to be the most effective guardians against man-made fires and deforestation by other means. High-tech support from outside can sometimes be useful here. The FAO is collaborating with Mbya Guaraní communities in Paraguay using a smartphone app and GPS to help them protect what remains of the Atlantic Forest, while Global Forest Watch is similarly supporting Ayoreo villages in the Chaco to monitor deforestation using satellite imagery.

Such suggestions may sound utopian at best, or like a technocratic fix at worst. The scale of the demands being made on South America’s forests are unprecedented.Turning the clock back to a radically low-consumption society is likely to prove unpopular and unfeasible. But there is willingness among Indigenous representatives, and even sectors of agribusiness, to experiment with new thinking and unusual forms of cooperation. In November last year, for example, the Aldeia Maracanã, an Indigenous occupation wedged between a highway and the Maracanã Stadium in Rio de Janeiro, hosted a unique conference. Native delegates from across the Amazon and the Americas traded ideas on how to defend the natural world and secure a sustainable way of life.

Ethnolinguist José Urutau Guajajara told me of his plans for an Indigenous university on the site to share traditional knowledge and technologies. Others talked of a common Indigenous-owned currency and road network across the national borders of the Amazon, unlocking development at their own pace. També, a Korubo shaman from western Brazil with a resplendent headdress of green macaw feathers, took me inside the former Indian Museum at the heart of the occupation—a crumbling palace with vines and murals snaking up its walls. Here, he kindled a small blaze on the floor. “Fire is like a god,” he explained, petitioning the flames for more allies in their struggle: “The fire of resistance from 500 years ago is still strong.”

Laurence Blair is an independent journalist who has reported from across Latin America, especially Bolivia and Paraguay, for the BBC, The Financial Times, The Guardian, and National Geographic. His work can be followed at www.laurenceblair.com and on Twitter @LABlair1492.