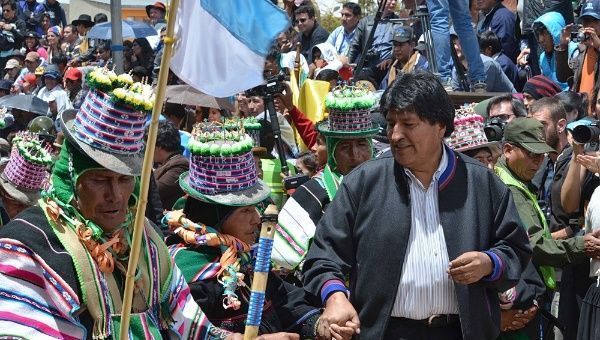 Green-Smearing- from Nicaragua to Bolivia

On one level the intensifying deceit of Western media foreign affairs coverage corresponds to the increasing desperation of Western elites confronting their failing global power and influence. But it also signals yet another crisis of capitalist economic growth. After 1945, North America and Western Europe based their genocidal imperialism on a social compact promising prosperity to their peoples at home in exchange for their collusion in imperialist military aggression and neocolonial crimes overseas. That system operated successfully based on the fundamental neocolonial fiction that Western governments and societies promote freedom, justice and democracy around the world, while doing the very opposite.

Now, stagnation and recession in the U.S. and its allied countries demand new dimensions to the endless psychological warfare necessary to sustain the basic neocolonial fiction. Psychological warfare in North America and Europe works to create enduring false beliefs generating, over time, permanent false memories, all serving the purposes of Western elite perception management. That is why the authorities in Sweden, Britain and the U.S. elites have been so vengeful and vindictive towards Julian Assange, among innumerable other less high profile victims. Anyone who effectively exposes the big neocolonial lie is met with the sadistic vindictive revenge of the elites they defied.

A fundamental dimension of contemporary psychological warfare has been dual-purpose corporate co-option of non-governmental organizations. In that psy-warfare dimension, NGOs serve both as disinformation partners with Western news media and too as false interlocutors in international forums and institutions, where they attack governments challenging the U.S. elites and their allies. They actively subvert governments inside countries challenging the West, for example, in Latin America, Cuba, Venezuela, Nicaragua and Bolivia. But they also pervert due process in institutions like the UN, posing as civil society but in fact serving Western elite corporate imperatives, for example in international human rights and environmental mechanisms and forums.

Among these NGOs figure high profile human rights organizations like Amnesty International, Human Rights Watch, the International Federation for Human Rights and Avaaz along with environmental organizations from 350.org and the World Resource Institute to Global Witness and Greenpeace. An increasing interrelationship has developed between corporate NGO funding and the exploitation of people’s general willingness to volunteer for and support apparently good causes. Symbolic of this is the way World Economic Forum attendees like Kumi Naidoo move readily between top management from one NGO to another, in Naidoo’s case from Greenpeace to Amnesty International. From Libya and Syria to Venezuela and Nicaragua, Amnesty International has played a key role using false reports to demonize governments resisting the U.S. and its allies.

As Cory Morningstar has pointed out, Greenpeace is a key player in promoting the corporate driven New Deal for Nature aimed at financializing what remains of the natural world, especially its biodiversity, as a way of engineering a “Fourth Industrial Revolution”. Western corporate greed underlies the identical patterns of news media and NGO misrepresentation and outright deceit supporting regime change offensives against Libya and Syria, or Venezuela and Nicaragua. Right now, that very same pattern of media and NGO manipulation is clearly at work preparing for an intervention to prevent Evo Morales being re-elected as President of Bolivia.

Bruno Sgarzini and Wyatt Reed have noted how Western media and NGOs have falsely attacked Evo Morales blaming him for not controlling the fires in Bolivia’s Amazon. This is exactly what happened in Nicaragua immediately prior to the coup attempt in 2018 when the Nicaraguan authorities were fighting a fire in the Indio Maíz Biological Reserve. That episode softened up Nicaraguan public opinion and set in motion social media networks involving thousands of youth activists trained for that purpose beforehand over several years with U.S. and also European government funding. In mid-April 2018, barely a week after the Indio Maiz fire was extinguished; those networks launched a social media blitzkrieg of lies and inventions marking the start of the actual coup attempt. A practically identical process is well under way now in Bolivia, which holds presidential elections next October 20th.

The timing of the fires in Bolivia’s Amazon is extremely propitious from the perspective of the U.S. authorities and their allies. It takes almost two months for the effects to wear off of the initial psy-warfare bitzkrieg of the kind waged against Nicaragua in 2018 and against Brazil’s Worker’s Party as part of Jair Bolsonaro’s successful 2018 election campaign that same year. Bolivia will almost certainly experience the same kind of psy-warfare assault via social media prior to the October elections. The campaign will be timed to optimize the effect of mass false accusations of government wrongdoing and corruption along with false media and NGO claims of security force repression. Opposition activists are likely to exploit peaceful demonstrations on indigenous peoples and environmental issues so as to commit murderous provocations, just as they did in Nicaragua and Venezuela.

All of these tactics are likely be deployed against Bolivia so as to destroy the current prestige and high levels of support for President Evo Morales. In Bolivia, as in Nicaragua and Venezuela, the governing progressive political movement enjoys around 35-40% core electoral support, the right wing opposition have around 25-30% with 30-40% of voters uncommitted. The Western elites know they need to motivate something over half of those uncommitted voters against Evo Morales so as to get the right wing government they so desperately need in Bolivia to try and make good the unmitigated debacle of Mauricio Macri’s right wing government in Argentina.

The intensity of any Western media and NGO campaign against Morales is likely to reach similar levels as their cynical campaigns of lies and defamation against Venezuela and Nicaragua. Should that offensive go ahead, as seems probable, the difference will be that this time Evo Morales and his team are alert and unlikely to be taken by surprise as the Nicaraguan authorities were by the vicious, sudden attack against them in April 2018. A likely variation in Bolivia’s case will be a higher profile of environmentalist NGOs working in tandem with their human rights counterparts feeding misrepresentations and downright lies into Western news media. For the U.S. and European Union elites the regional geopolitical stakes are high enough to make an attack on Bolivia imperative.