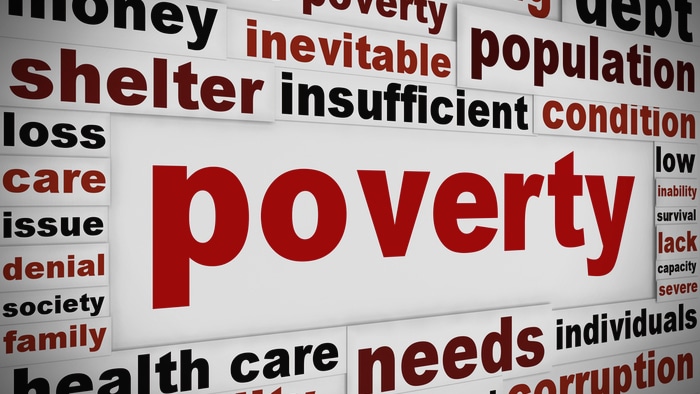 During the debate about the global poverty numbers that unfolded earlier this year, the Bloomberg opinion columnist Noah Smith wrote a piece discussing some of my claims. In the months since a number of people have asked me to respond.  While some of Smith’s points are worth engaging, the piece makes a number of misleading assertions that I think unfortunately degrade the quality of the debate, and usefully illustrate the sort of sleight of hand to which many defenders of the grand poverty-progress narrative have resorted.

This tendency is clear beginning with the title: “The world really is getting richer, as poor countries catch up”. The title is incorrect on two fronts.

First, it implies that I deny the world is getting richer, as measured in GDP. I do not. And that’s not what this debate is about. Everyone agrees that aggregate global GDP is growing, which is after all an intrinsic function of capitalism (although we should be clear that GDP is not a good measure of “riches”, given what it ignores; for instance, natural wealth has been declining steadily for many decades, and the Genuine Progress Indicator has stagnated since the 1970s). The problem, rather, is that the vast majority of new income is being captured by the rich, and particularly by the global North. Only a very small share of it (about 5%) goes to the poorest 60% of humanity, despite the fact that they provide the majority of the labour and resources that go into the global economy. As a consequence, the incomes of the poor have not grown enough to lift them out of poverty–not by a long shot. That’s my contention, and that’s the issue we need to confront.

Second, to state that poor countries are “catching up” is incorrect. Smith provides no evidence for this assertion. In fact, World Bank data shows the opposite: the per capita income gap between the global South and the global North has nearly quadrupled in size since 1960 (see graph below). One might argue that the income of the South is growing at a faster rate than the income of the North, but that’s not the same as “catching up” by any commonly accepted definition. 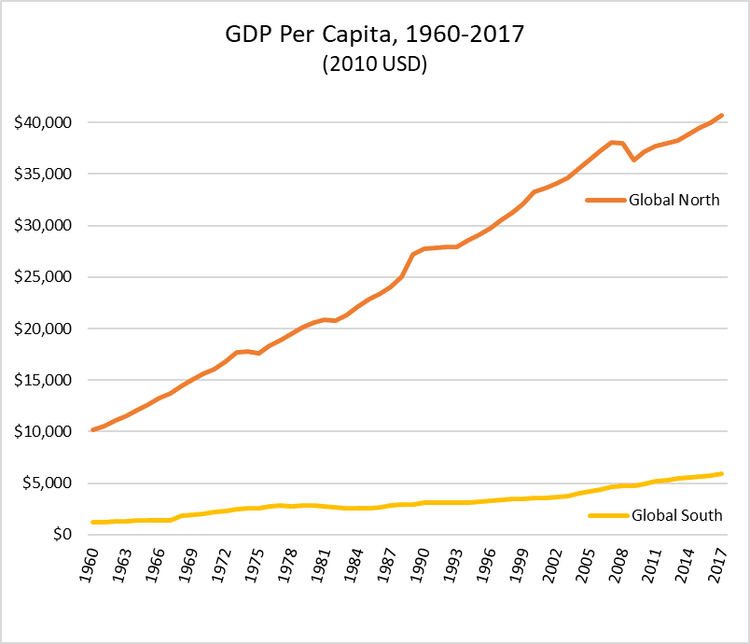 Below the title, the leader states “Arguments that extreme poverty is on the rise do not match the data”. The implication is that I have said that extreme poverty (which is measured at $1.90 per day) is on the rise. I have not. Nor has anyone, to my knowledge, ever. I did make a number of other arguments, however, including (a) that the $1.90 line is arbitrary, and has no grounding in any empirical conception of poverty or human needs; (b) that $1.90 is inadequate to achieve basic health and nutrition; (c) that the evidence-based poverty line is at least $7.40; (d) that at this level the number of people living in poverty has increased by nearly 1 billion since 1980; and (e) that, excepting China, the proportion of people living in poverty grew during the imposition of neoliberalism in the 1980s and 1990s, from 62% to 68%.

Instead of engaging with my actual arguments, Smith mischaracterizes them and opts to do battle with straw men. As I see it, this is intellectually dishonest, and does not advance the conversation. Unfortunately it’s not the first time he has done this with respect to my work.

Smith goes on to say that I embrace “a narrative of increasing immiseration”. If by immiseration we mean that people are getting poorer (which is the only definition of immiseration I am aware of), he is incorrect. I have not said that. On the contrary, I have pointed out that the incomes of the poor have increased since 1981–just not enough to lift them out of poverty. Again, that’s the problem to which I have sought to draw attention.

To be more specific, though, we should say that the incomes of poor people have increased in aggregate. World Bank data shows that there were in fact long periods of actual immiseration in most global South regions during the imposition of neoliberalism in the 1980s and 1990s, when the incomes of poor people (those living under $7.40 per day) declined. It is important that we do not paper over this brutal reality, as the dominant poverty narrative does.

Smith says we need to recognize increases in income that happen below $7.40. Such increases improve the lives of the poor, he points out, and we shouldn’t let that get obscured. I absolutely agree. Once again, I have not argued that we shouldn’t pay attention to low-level increases in income. I’ve simply said that (a) those increases have not been enough to get people out of poverty; (b) they are dramatically lower than what people living in poverty are owed, given the labour and resources they contribute to the global economy; and (c) they are egregiously small compared to the wildly disproportionate share of global growth that has been appropriated by the rich. We need to face up to these facts.

Sure, we can redefine “poverty reduction” to mean neither a reduction in the numbers of poor nor a reduction in the proportion of people in poverty, but rather a reduction of the poverty gap (how deep people are below the poverty line). By this metric, there has been some improvement. But let’s not kid ourselves: the pace of change has been extremely slow, with poor people’s daily incomes increasing by only about 2 cents per year, according to World Bank data. It’s hardly worth touting as “progress” these pennies that have trickled down to the poorest when the overwhelming majority of new income since 1980 has been captured by the very rich – enough to end global poverty many times over. This is not progress – it is an offense.

With respect to my critique of the long-term poverty data, Smith says: “This may or may not be true; as Roser and Hasell note, economic historians do try to account for these non-market sources of production.” In fact there are no legitimate grounds for equivocation here. The data that underpins Roser’s long-term graph does not count people’s access to goods derived from the commons, from household production, from gift exchange, or any of the other things that poverty surveys cover – nor does it attempt to do so. The data may tell us a little bit about non-monetary GDP, but it tells us nothing about poverty. Here again, Smith has not engaged with my actual argument.

Smith’s final point is perhaps the strangest of all. He says: “If Hickel is right, colonialism impoverished the world even more than the graph would suggest. But if that’s true, the drop in (extreme) poverty since 1981 is even more impressive, because it represents such a dramatic reversal of past trends… The triumph of decolonization is a story that even Hickel should be able to feel happy about.”

There are two things worth saying here. First, the graph does not suggest that colonialism impoverished the world–indeed, it suggests the opposite, which is precisely what’s wrong with it. Second, Smith seems to believe that the global South went straight from colonialism to neoliberalism in 1981. It did not. He ignores three decades, from 1950 (the end of colonialism) to 1980, during which global South countries used progressive economic reforms to improve wages, improve access to social goods and housing, improve access to land for peasant farmers, and improve the share of national income going to workers and the poor. These gains were reversed by structural adjustment (1980-2000), during which poverty consequently rose in both proportional and absolute terms. This happened virtually everywhere except China and East Asia, which did not conform to Smiths’ preferred brand of Washington Consensus neoliberalism but rather embraced state-led development strategies.

Of course I feel happy about decolonization and the gains that have been achieved since then. But let’s not forget to give credit where credit is due: to the progressive post-colonial political movements of the 1950s-1970s. Unfortunately, the economic sovereignty that was won during those decades (through the Non-Aligned Movement, and the New International Economic Order) was effectively destroyed during the structural adjustment period. We need to be honest about this history. Periodization matters.

The debate about global poverty is important. But our collective understanding of this matter will only be served by intellectually honest and sincere engagement with the arguments at hand.