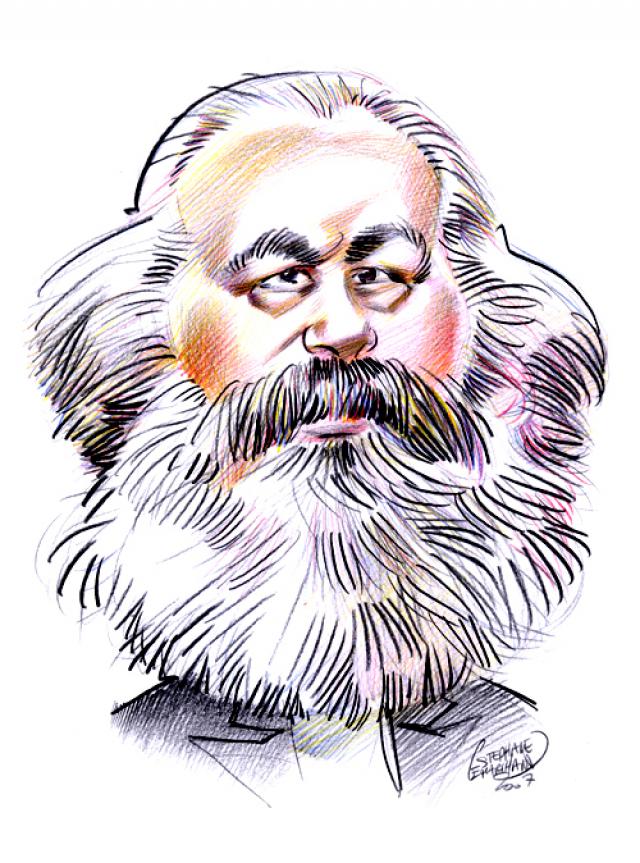 Imagine you came across a 150-year-old message in a bottle that predicted the world would face a catastrophic crisis as a result of profit-driven capitalism.

Imagine that prediction also explained why capitalism — sustained for generations through the exploitation of nature and human labour — would push aside all moral, rational and scientific objections in the blind pursuit of profit.

And imagine that prediction said it would come to a point where the majority of people would have to choose between capitalism or a new democratic, rational and socially just system capable of maintaining a sustainable relationship with Earth.

Such a message would have summed up humanity’s predicament today — and it is precisely what 19th century socialist rebel Karl Marx wrote.

Marx not only named the enemy — capitalism — but explained why this system is the cause of the existential crisis facing humanity and the planet.

“Capitalist production,” Marx explained, “only develops the technique and the degree of combination of the social process of production by simultaneously undermining the original sources of all wealth — the soil and the worker.”

According to Marx’s analysis of capitalism, there is a double contradiction at the heart of the capitalist system’s transformation of everything into a commodity.

Under capitalism, everything is a commodity for sale. The exchange value of a commodity is worked out on the basis of the average amount of human labour required to create or extract the commodity.

The first contradiction is that workers who create or extract the commodity are only paid the average cost of reproducing their labour power. All value above that is appropriated by the capitalists as profit.

Marx saw humanity as being, like all other living species, in a metabolic relationship with nature. However, capitalism systematically disrupts this system, causing ever greater and multiplying metabolic rifts.

In Capital Volume 1, Marx wrote: “Capitalist production disturbs the metabolic interaction between humans and the Earth, that is, it prevents the return to the soil of its constituent elements consumed by humans in the form of food and clothing.”

Climate and Capitalism editor Ian Angus, one of several ecosocialists who have pointed out the invaluable insights that Marx offers to those confronting the climate emergency today, explained: “The only way life has continued on the planet for 3 billion years is by constantly recycling and re-using resources.”

But metabolic rifts have disrupted this recycling and “a million species are about to go extinct if we don’t change our way of interacting with nature, because rifts in nature’s metabolisms are expanding too fast for many species to adapt.”

Ecologist Barry Commoner, who wrote The Closing Circle, was strongly influenced by the ideas of Marx. He argued: “The first law of ecology is that everything is related to everything else.

“To survive we must close the circle. We must learn to restore to nature the wealth we borrow from it.”

Commoner’s conclusion, one shared by millions of today’s climate emergency rebels, was that: “Our options have become reduced to two: either the rational and social organisation and distribution of the Earth’s resources, or a new barbarism.”

Marx did much more than name capitalism as the enemy. He carried out a forensic study of how capitalism operated in his time and worked out the dynamics of the system.

He found that the fierce competition between various capitalists for profits would cause regular crises in which the weakest capitalists would either go to the wall or be swallowed up by the most profitable.

Competition would give way to monopoly and, in the process, millions of workers would be thrown onto the army of the unemployed, entire communities and ecosystems would be destroyed, nations enslaved and the world torn asunder by war.

The cleaving of the world into imperialist robber nations and economically enslaved and impoverished colonies and semi-colonies flowed from this dynamic and shapes the global climate emergency today.

As US Marxist John Bellamy Foster explained in “Imperialism and the Anthropocene” in The Monthly Review: “There can be no ecological revolution in the face of the current existential crisis unless it is an anti-imperialist one, drawing its power from the great mass of suffering humanity.

“The global ecological movement must thus be a movement for the unification of the oppressed, emanating from innumerable Extinction Rebellions, and leading to the first true International of the world’s workers and peoples.

“The poor shall inherit the Earth or there will be no Earth left to inherit.”

The “robbery of nature” was taken as “free” by the capitalists from the start and “surplus labour” is appropriated from the workers as the capitalist’s “right”. The profit gained is then reproduced as capital to begin another cycle of robbery of Earth and labour.

By definition, the search for the highest profit is at the heart of all economic activity by capitalists because, by its own dynamic, capital either gets a higher profit return or is destroyed or swallowed up by more profitable capitalists.

This drives capitalism towards chronic crises of overproduction. Commodities are produced that people cannot afford and often do not need.

To “fix” this problem, out-of-control advertising and financial industries grow. Not content with making the 99% wage slaves, capitalism also turns us into debt slaves.

Marx’s study of history convinced him that the periodic crises that capitalism produced could be compared to a “sorcerer who is no longer able to control the powers of the nether world whom he has called up by his spells”.

Capitalism’s crazy profit drive is beyond the rationality of individuals. Capital demands the highest return and the corporate CEOs who are prepared to kill, destroy or do whatever it takes to get that return will exist as long as this system continues.

However, Marx also predicted that capitalism would “create its own gravediggers” by relentlessly driving an ever greater section of the population into the ranks of those who have only their labour to sell to survive — the modern working class, or “the 99%” as the Occupy generation of rebels described it eight years ago.

Marx predicted a profound and qualitative shift in consciousness of the 99% as constant upheaval and capitalism’s war against people and nature force it into greater and more profound struggles.

Rebels and revolutionaries have long realised that working together in struggle is the best teacher.

This was certainly the message driven home by Russian revolutionary leader Vladimir Lenin. He argued that revolutionaries should draw to the fore and share as widely as possible the broadest lessons of the struggles against capitalism and burst out of the narrow focus of trade union struggle for better wages and conditions.

In his famous book What Is To Be Done?, Lenin argued: “Working-class consciousness cannot be genuine political consciousness unless the workers are trained to respond to all cases of tyranny, oppression, violence and abuse.”

The shift in consciousness could only happen if the oppressed learned “from concrete, and above all from topical, political facts and events” the behaviour of the different classes and apply in practice this understanding in a struggle against “all oppressions”.

The “struggle against all oppressions” today is unavoidably focused around the climate emergency because of the existential threat it poses.

We can see this played out in the challenge that the September 20 Global Climate Strike has posed to trade union leaders. They are forced to confront the false dichotomy promoted by the capitalist class (which is hooked on fossil fuels) between jobs and facing up to climate change.

Today’s rebels and revolutionaries argue that trade unions must concern themselves not just with creating and saving jobs, but also with what sort of jobs society and the environment need.

Leaving this to the market is out of the question. The market (that is, the powerful vested interests of coal, gas and associated financial partners) got us into this mess. We cannot count on the market to get us out of it.

We cannot even allow the shift to renewables to be “left to the market”. We do not have the luxury of time to try this course and, moreover, the market will never produce good jobs. Significant sections of the renewables industry share with other capitalists the nasty tendency to resort to exploitative and dangerous labour practices.

For these reasons, and more, the economy must be taken out of the hands of the capitalists and democratised if it is to be re-synched with nature.

In its place we need a different system in which, as Marx argued, “the associated producers govern the human metabolism with nature in a rational way, bringing it under their collective control … accomplishing it with the least expenditure of energy and in conditions most worthy and appropriate for their human nature.”

Call it “socialism” or something else — but that is the future we need.