More than seven million Kashmiris remain suffocated by the Indian government. The curfew that went into effect on 5 August is still in place. The media is not able to get into the state and offer a report of the situation. Telephone and internet services have been shut down. Over two thousand academics, journalists, and politicians are in prison or under house arrest. Most recently, the Indian government arrested Farooq Abdullah (age 82) under the Public Safety Act of 1978 (which Amnesty International calls a ‘lawless law’). Abdullah’s father–Sheikh Abdullah–was the unchallenged leader of Kashmir’s liberation movement in the 1940s.

Despite the production of a state of fear, brave people have come out on the streets to protest the situation. A senior government official said that there have been at least 722 protests since 5 August. This is a testament to the steadfast determination of the Kashmiri people to prevent their elimination. But their protests and their words are not being amplified. It is as if Kashmir has vanished from the map.

Amongst the brave Kashmiris is Mohammed Yusuf Tarigami, the leader of the communist movement in the state. Tarigami, who comes from a small village in southern Kashmir, has spent the past fifty years fighting for Kashmir, dreaming of a Kashmir free of war and poverty. He won a seat in the Jammu and Kashmir Legislative Assembly four times (1996, 2002, 2008, and 2014), an assembly which the right-wing government in New Delhi suspended. Prisons are as familiar to him as the Assembly. There is ‘accumulated anger’ inside Kashmir, he says, anger that has no easy political outlet. To learn more about the situation in Kashmir, please read the Tricontinental: Institute for Social Research Red Alert #1.

On 12 September, thousands of people took to the streets across Sudan to call for the ouster of the chief justice and the attorney general. The Sudanese Professionals Association–and the Sudanese Communist Party–have said that they are unhappy that the reins of power are with people like General Abdel Fattah al-Burhan and General Mohammed Hamdan Dagalo. They want to see a more civilian character to the government. To make sense of the situation in Sudan, Tricontinental: Institute for Social Research  has released this week Red Alert #2. You can download it here, and read it below:

What Happened in Sudan?

On 19 December 2018, an uprising began in Sudan. This uprising would culminate in the removal of Sudan’s president–Omar al-Bashir–from power on 11 April 2019. The army staged a conservative military coup to abort the revolutionary tide and keep the same old policies. It dissolved the parliament and established a two-year military regime led by the Transitional Military Council. The revolutionary forces–galvanised into the Alliance of Freedom and Change, with the Sudanese Communist Party and the Sudanese Professionals Association at the front–continued their march forward, determined to make a full revolution. The clash between the Transitional Military Council and the Alliance of Freedom and Change continues. It could either result in an Egypt-like solution, where the military regime masquerades as a democratic party, or it could move forward with a revolutionary democracy.

Why Did the Sudanese People Rise?

In 2018, the range of negative social pressures rose as a result of the stagnation of Sudan’s economy. The growth rate fell to -2.3% that year. This was a result of at least four reasons: 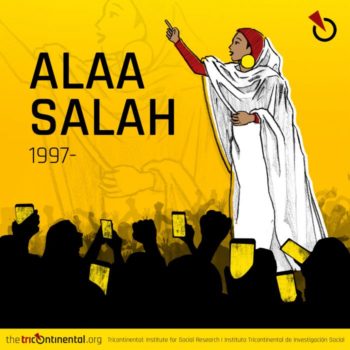 How Did the Sudanese People Rise?

The uprising began in Atbara, a workers’ city which had witnessed the birth of the Sudanese trade union movement in the 1940s. The residue of that struggle, and of the victorious fight to overthrow the British-backed dictator Ibrahim Abboud (in October 1964) and al-Nimeiri (April 1985), remains.

A range of older political formations (the Sudanese Communist Party and the Sudanese Women’s Union) and newer formations (the Sudanese Professionals Association, formed in 2016 by 17 trade unions) joined in this current struggle with civil society groups and political parties alongside a new group whose name defines the temperature, Girifna–‘We Are Disgusted’. These groups gathered around a Declaration of Freedom and Change, which called for full democracy over the politics and the economics of the country, and for a commitment to health, education, housing, and the protection of the environment, as well as the immediate formation of a National Committee for the Constitution. This Declaration binds the various political actors into a tight unity.

What Is Possible in Sudan?

For the moment, the military seems to have the upper hand. Faced with the determination and heroic continuation of the mass protest movement under the leadership of the Freedom and Change Alliance, and the support of junior officers, the military junta accepted the compromise proposals of the African Union to share power with the alliance for the coming three years. The military is not prepared to fully crush the movement because many junior, non-commissioned officers are sympathetic to its goals. This does not mean that the military–like al-Bashir before it–has not used violence. It has. But the alliance, rooted in the Declaration, has been resilient. For them, the revolutionary process has not ended.

That sense of a process without end comes from Sudan, but it also defines the situation in Kashmir as well as Tunisia. In 1971, the military dictatorship in Sudan brought the leader of the Sudanese Communist Party–Abdel Khaliq Mahjub–before a tribunal. He was sentenced to death and executed. Mohammed el-Fayturi (1929-2015), one of Sudan’s most wondrous poets, wrote the exquisite Dig No Grave for Me in honour of Mahjub. 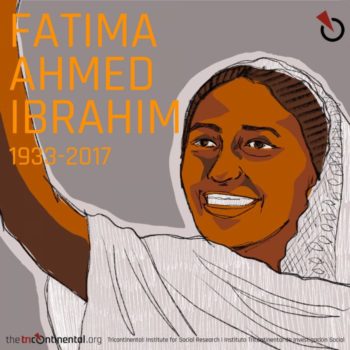 Dig no grave for me;

I shall lie in every inch of the earth.

I shall live like water on the Nile’s body;

I know why tyrants believe their guns.

I am not afraid

My voice is the gallows for all tyrants.

One of Mahjoub’s close comrades was Fatima Ahmed Ibrahim, whose husband–al-Shafie Ahmed al-Sheikh was executed alongside Mahjoub in 1971. Fatima was the first woman to enter Sudan’s parliament in 1965 as a member of the Sudanese Communist Party. She was already a member of the Party’s politburo and the president of the Sudanese Women’s Union. It was women like Fatima Ahmed Ibrahim, and it is men like Mohammed Yusuf Tarigami that build the road that we must continue to build towards the future. Build roads, they say, not graves. That is our outlook.