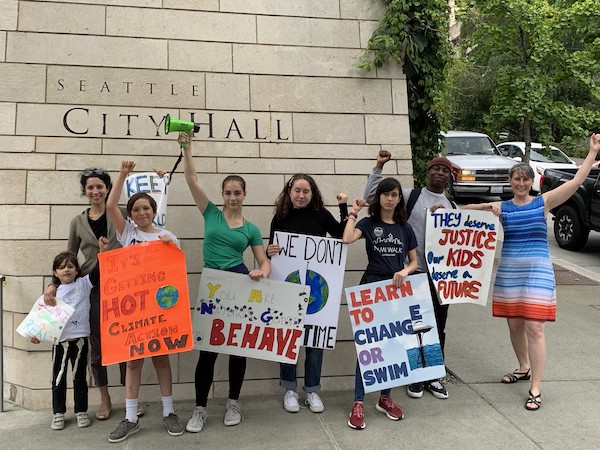 From Scientist to Activist

“Dr. Doom.” fellow students joked as we walked out of our department seminar. It was 1998 and the presenter was Richard Gammon, a co-author of the first IPCC report. I didn’t share my fellow University of Washington grad students’ joke. I was uneasy, wondering about the timing of forecasts and feedback loops.

My grad school journals detail my awakening to the climate crisis. One 1999 entry reads, “I’m probably an expert on climate change compared to my peers and the general public. I need to share my knowledge.” Then I listed areas the public needed to know: “Climate change, coral bleaching, ozone hole, air pollution, and mass extinction.” I feel a sense of missed opportunity re-reading my journal. I clearly felt a sense of urgency in 1999. In grad school and postdoc, I heard stories of colleagues, such as Michael Mann, professionally maligned and harassed by fossil fuel industry stooges. I’m afraid to admit, his experience scared my younger self away from climate action.

I was a ‘good scientist’. I stuck to the science and didn’t interject my views regarding action or policy solutions. When I taught my first climate class in 2001, the strong El Nino year 1998 was the warmest year on record and CO2 concentration was 367ppm. Today, 1998 doesn’t even rank among the top ten hottest years on record, and CO2 reached a new high of 415 ppm in 2019. It took me decades to learn that just presenting the problem and solutions isn’t enough to effect change. It is the contributions of women climate scientists, activists, and children, who inspired me to join them and raised my awareness of climate justice. Mary Heglar, Jamie Margolin, Greta Thunberg, my own children, and scientists Sarah Myhre, Katharine Hayhoe, and Peter Kalmus, have all inspired me to step out of my comfort zone, act, and encourage others to act with us.

If I, a climate scientist, don’t share what I know and how I feel, who will? How many atmospheric chemists are out there who can explain the science in a way that the average person can understand and connect it to justice and equity? Every scientist I know feels a sense of urgency around the climate crisis. Urgency that we should share with our families, colleagues, and public. As I tell my students, “You know more about climate change than 99% of people. Share what you know. Talk about it.”

Today, I share my sense of urgency and connect to the civil rights and women’s rights heroes of the past: Dr. Martin Luther King Jr., Rosa Parks, suffragettes. I introduce audiences to today’s climate activists: Michael Foster, and scientists turned activists, James Hansen, retired Director of NASA-GISS, and Sandra Steingraber, whose peaceful direct actions all led to imprisonment. Michael Mann is also among these heroes, standing up for decades to the fossil fuel juggernaut of disinformation.

Social media helped facilitate my climate outreach and activism, connecting me with journalists, fellow climate scientists, and activists. I don’t seek out media opportunities, but when asked, I now see it as my duty to share my knowledge and sense of urgency.

It’s not enough to just study and report on the fossil fueled climate changes occurring. I feel compelled to sound the alarm. You don’t need to be a doctor to tell someone to stop smoking around a baby. All of us who understand the climate crisis have a duty to speak up.A medical doctor is not viewed as an activist when advocating for her patient. Our patient is in the ER with a fever over 1.0 C, it’s getting hotter, and the toxic buildup in her systems is reaching critical limits. What gives me hope is our human capacity for love, ingenuity, faith, and my knowledge that we already have the solutions.

The burden of responsibility lies with the business and political leaders hindering change for profit. Rich businesses and individuals don’t intend to destabilize climate, hurting the poor and most vulnerable. Yet rich lifestyles do exactly that. The lifestyles of the richest 0.54% (~42 Million people) are responsible for more emissions than the poorest half of global population (3.8 Billion people). As with all issues of equity and justice: It’s actions that count, not intentions. I find hope in the more equitable, healthier, and peaceful world we will create as we address this crisis.

My activism today is speaking out, showing up, and educating. I say yes to testifying against the continued poisoning of my patient, with a liquified natural gas plant in Tacoma, Washington. I say yes to media requests for interviews to explain climate science and discuss anxiety. I say yes to joining the youth at Friday climate strikes.

No one wants to sacrifice time and energy or become a political prisoner. Yet sacrifice of time and freedom by the great activists (MLK Jr, the suffragettes, Rosa Parks, etc…) was required to effect change. And they did not act alone. Thousands marched and sacrificed with them. You can too. Join a climate action near you on Sept 20, 2019: the Global Climate Strike. Everyone is needed.

This post was originally posted on Medium.com and has been condensed for length and clarity