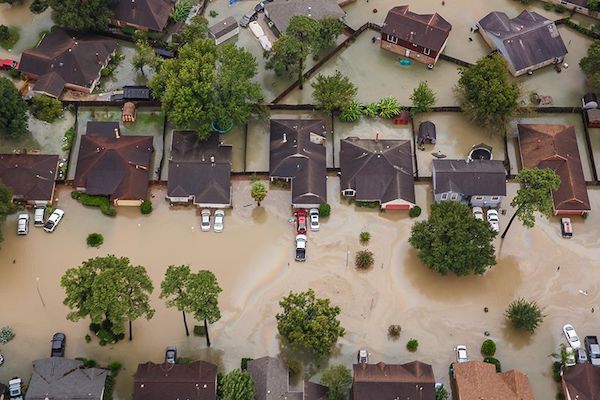 Figure 1 | Flooding in Houston, Texas, from Hurricane Harvey. Climate change is estimated to have made such rainfall three times more likely than it otherwise would be for the Houston area20.Credit: Marcus Yam/Los Angeles Times/Getty

THE TOPIC IN BRIEF

• Climate change, including global warming and an increased risk of extreme weather events, is one of the greatest threats facing humanity today (Fig. 1).

• It is a complex issue that involves many social, technological and physical processes.

• To describe the intricate relationships between these processes, scientists have devised computer simulations known as integrated assessment models (IAMs).

• IAMs are used to generate pathways for climate-change mitigation that are consistent with global temperature targets.

• Some scientists have suggested that IAMs are no longer fit for purpose and that meeting climate targets will require a radical reinvention of industrial society that the models are not equipped to address.

• But others have argued that IAMs are an indispensable tool for exploring how to reach climate targets and are a key building block in understanding the feasibility of these targets.

The Paris agreement on climate change aims to limit the global temperature rise in this century to 1.5–2 °C above pre-industrial levels. Science makes clear that the total quantity of emitted carbon dioxide correlates closely with such a rise1. The problem is that delivering on the 1.5–2 °C commitment demands emissions cuts for wealthy nations of more than 10% each year2,3, far beyond rates typically considered possible in the current economic system. It is in seeming to remedy this impasse that IAMs have an important and dangerous role.

Behind a veneer of objectivity, the use of these leviathan computer models has professionalized the analysis of climate-change mitigation by substituting messy and contextual politics with non-contextual mathematical formalism. Within these professional boundaries, IAMs synthesize simple climate models, with a belief in how finance works and technologies change, buttressed by an economic interpretation of human behaviour.

Almost all IAMs foresee gradually rising carbon prices (costs applied to CO2 emissions) driving a multi-decadal transformation towards low-CO2-emitting energy suppliers, such as wind turbines and nuclear power. They also envisage planetary-scale negative-emission technologies (NETs), which remove and subsequently store CO2 directly from the atmosphere. The allure of these conclusions is that the 1.5–2 °C commitment remains plausible through incremental decarbonizing of the free-market economy.

But is the outlook really so rosy? Annual CO2 emissions have increased by about 70% since 1990 (see go.nature.com/2ntk2ja). And even nations that are held to be climate progressive have made little progress, once emissions from aviation, shipping and offshored manufacturing operations are included. Given this failure, how have IAM results maintained their optimism for ongoing technocratic approaches to mitigation (such as modest carbon taxes and rising technology standards)?

In 2006, the highly influential Stern report modelled the growth of global CO2 emissions from 2000 to 2006 at 0.95% per year, despite the available empirical data suggesting a growth of 2.4% per year4. Preference for desirable modelled data over inconvenient real-world data also underpinned the IAMs of the US Climate Change Science Program5. Similarly, in 2009, the European Union’s ADAM (Adaptation and Mitigation) project found solace in a projected expedient peak in global emissions6 in around 2010.

More recently, with annual emissions continuing to grow, planetary-scale NETs have become ubiquitous in IAM studies, despite little more than pilot projects supporting such enthusiasm. By applying a discount rate to reduce the predicted costs of future technologies, IAMs have been able to claim that highly speculative NETs, in the decades to come, will be much cheaper than immediate and substantial mitigation today.

In the 1990s, technocratic approaches could have reduced emissions in line with a 2 °C global-warming target. However, climate change is a problem of cumulative emissions. Ongoing failure to mitigate emissions has pushed the challenge from a moderate change in the economic system to a revolutionary overhaul of the system. This is not an ideological position; it emerges directly from a scientific and mathematical interpretation of the Paris climate agreement.

For more than two decades, IAMs have been part of this accelerating failure: initially by fine-tuning their assumptions and data; and latterly by presuming hundreds of billions of tonnes of speculative negative emissions. But more profoundly, IAMs have simply become the wrong tool for the job. The mitigation challenge today is of a fundamentally different scale from that of the 1990s.

Typically, IAMs use models based on free-market axioms. The algorithms embedded in these models assume marginal changes near economic equilibrium, and are heavily reliant on small variations in demand that result from marginal changes in prices. The Paris climate agreement, by contrast, sets a mitigation challenge that is far removed from the equilibrium of today’s market economy, requiring immediate and radical change across all facets of society.

What is most disturbing is that many elements of this critique were already detailed in 1984 in three excellent papers that analysed the IAM of the day7–9. Thirty-five years later, the same mistakes are not only being perpetuated, but have been rolled out and standardized across IAM studies — only this time with deadly consequences.

By providing crucial knowledge about the driving forces of climate change and the magnitude of transformations needed to reverse these forces, IAMs play a central part in the climate debate. Originally, IAMs were used to generate scenarios that described how emissions would evolve in the future on the basis of plausible (internally consistent) economic and technological developments10. The main contribution of these scenarios was the warning that existing trends would lead to dangerous global warming in the twenty-first century.20

As the message about the dangers of doing nothing to combat climate change reached policymakers, climate researchers were asked to not only point to problems, but also identify solutions11. In response, the focus of IAMs expanded from modelling emissions under a range of plausible assumptions to constructing scenarios that would achieve specific climate targets. To stress this difference, the new scenarios were called mitigation pathways11.

Although these pathways have been useful for benchmarking and guiding climate policies12,13, they have also been criticized for being incremental, technocratic and unfeasible. However, the pathways are not incremental. On the contrary, they depict massive, rapid and unprecedented changes in energy supply and demand, as well as in other sectors. These changes greatly deviate from historical trends and today’s market equilibrium. For example, to limit global warming to below 1.5 °C, some pathways14 depict policy intervention that is equivalent to a carbon price as high as several thousand US dollars per tonne of CO2 by 2030.

The criticism of being technocratic is more valid because IAMs tend to emphasize technological rather than social change. For instance, most pathways assume population and economic growth in line with current trends, which leads to rising energy demand, especially in the developing world. But IAMs can equally well incorporate other assumptions such as slower or more unequal growth15, radically lower energy demand16 and lifestyle changes17.

The question still remains as to whether any of these mitigation pathways are feasible. Although IAMs identify plausible combinations of potential solutions to mitigate climate change, they do not indicate whether these solutions are feasible at the required scale. The approach follows the convention, originating in military and corporate planning18, of systematically asking ‘what if’ questions to envisage future consequences of decisions or developments11. For example, are NETs still required to limit warming to 1.5 °C if society pursues universal reductions in energy demand16? This is not the same as asking whether NETs or radical demand reductions are likely or feasible, which is equally important for climate-change mitigation and adaptation.

This confusion should be cleared up to ensure that IAMs are used to their full potential. To begin with, IAM researchers should better communicate not only the purpose and assumptions of mitigation pathways, but also what is known about their feasibility. This would inevitably confront us with the fact that our current understanding of the feasibility of these pathways is limited. This applies both to technocratically oriented pathways, such as those involving NETs, and to pathways that rely on disruptive social change. We need to know whether NETs are more or less feasible than, say, widespread reductions in energy demand.

The challenge of evaluating feasibility is that the pathways are constrained not only by economic costs and technical complexity, but also by socio-political acceptability. This applies not only to pathways generated by IAMs through mathematical algorithms, but also to climate-safe futures imagined through visions of radical reinventions of society.

Any such future is feasible only in so far as there is a realistic path for real-life actors such as governments, businesses and communities to bring it about. To evaluate whether such actors have sufficient motivations and capacities to bear the economic and political costs of mitigation in different contexts19, IAMs need to be complemented by other fields of knowledge. Although IAMs are indispensable in telling us what is required to meet climate targets, we need other disciplines to understand which of these solutions are feasible.

This article is part of Covering Climate Now, a global collaboration of more than 250 media outlets to highlight the issue of climate change.