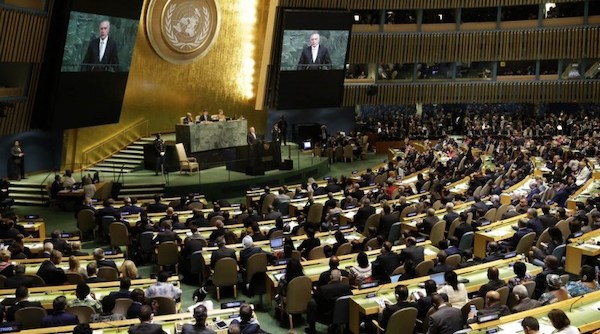 The Two Faces of the UN

The 74th UN General Assembly (UNGA) has shown, schematically speaking, two groups of countries. Both, with dissimilarities among their members, but with common interests each, they form today’s world. On the one hand, the United States, authoritarian, interventionist, serial transgressor of international law, with allies and partners who trust it less each day, is resisting the new multipolar geopolitical recomposition. It is no longer the only hegemonic pole. This was the case after the collapse of the Soviet Union, because previously there was a bipolarity based on military and economic power and nuclear parity between the two Cold War contenders. But the apparatus of cultural domination, with its centre in Hollywood; its financial centre, in Wall Street and the City of London, and the establishment in Bretton Woods (1944) of the dollar as an international reserve currency, gave Washington a strong advantage that Moscow never had. This made it easier for the United States to impose its will, cultural schemes, forms of government and prejudices on many other nations, especially those of the third world, in order to extract their natural wealth, qualified human resources and the fruit of their labor.

Who is aligned with the United States today? First, Israel and Saudi Arabia; more specifically with Trump in the White House, the reeling and corrupt Benjamin Netanyahu and the dismembering Crown Prince Mohamed bin Salman. The European Union is included, among whose governments there are differences that prevent discussion of a common foreign policy. On several issues they have shown considerable inability to resist Washington’s designs, a weakness that increased during Trump’s term in office, but not without some ostensible resistance. Also prominent in this group are the obscene neoliberal governments of Latin America and the Caribbean, in particular the neo-fascist Bolsonaro, the semipinochetist Piñera, the decadent Macrismo in Argentina, the warmonger and anti-Venezuelan duo Uribe-Duque and the Honduran heir to the 2009 coup d’état against President Zelaya. Countries where peoples’ repudiation of their ruling elites is vibrant. Outside these countries, there are governments like those of South Korea and Japan in Asia, subordinated to the United States, although their resistance to blindly following imperial dictates is notable. The speeches of the representatives of this group in the UNGA demonstrate this ambivalence. Returning to the reluctance of the United States and its partners to accept the current geopolitical reality, this was defined with great accuracy in the speech by the Russian Chancellor Sergei Lavrov: “Western countries try to prevent the development of a polycentric world”, with a “limited interpretation of liberalism. In short: ‘We are liberals and can do anything’”.

According to Lavrov, the purpose of this Western attitude “is obvious: to revise the norms of international law, which no longer interest the West, and replace them with rules adjusted to its own schemes… to proclaim the West, and only the West, as the undisputed source of legitimacy”.

It could be said, in a schematic way, that the two groups observed on the world stage are diametrically opposed between the “Westerners,” very well characterized by the head of Russian diplomacy as opposed to the application of international law, and supporters of new norms, which are not always the same, but which in each case respond to their interests and imply the threat of the use of force.

Meanwhile, on the other side are 120 countries of the Non-Aligned Movement, including China and Russia which have different political colors and flavors, but which would generally benefit greatly in a world governed by the UN Charter and other instruments of international law. These of course require improvement and updating in order to make the UN system of governance more democratic. The Proclamation of Latin America and the Caribbean as a Zone of Peace, adopted at the Summit of the Community of Latin American and Caribbean States (Celac) held in Havana in 2014, is a genuine model for the promotion and consolidation of peaceful and civilized coexistence among equals. Governments such as those of Mexico, Uruguay, Venezuela, Bolivia, Cuba, Nicaragua and most Caribbean countries advocate a foreign policy based on the concepts contained in that document. And should the victory in the presidential elections favor the Fernandez-Fernandez duo in Argentina and Evo Morales in Bolivia, as everything indicates, and perhaps the Frente Amplio in Uruguay, several more governments will be inclined to return to those concepts and to the path of unity and integration of our America within Celac. Added to this is the deflation of the U.S. coup plan in Venezuela and an anachronistic tightening of the blockade on Cuba, which has no future and will be defeated by its people.