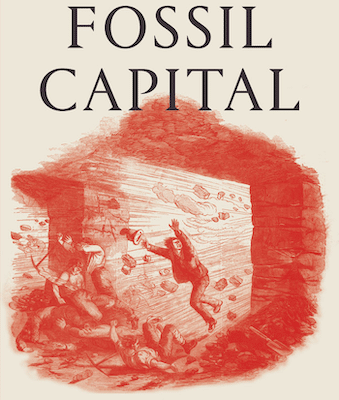 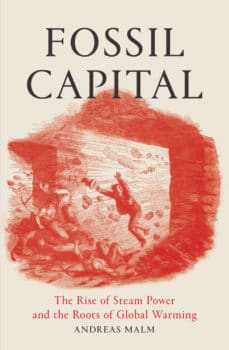 RP: In Fossil Capital you present numerous arguments to counter the “Anthropocene” theory, which offers an ahistorical “anthropogenic” explanation for global warming. How do you explain the hegemony of this approach in the field of environmental studies?

Andreas Malm: The discussions of a new geological epoch originate in the natural sciences: in the discoveries that humans have altered the basic functioning of the Earth system to such a degree that their fingerprints are everywhere and their causal impacts exceed those of natural mechanisms. From this insight, scientists have concluded that this is “the age of humans”, or the Anthropocene. That in itself is neither strange nor objectionable. The problem appears when the notion of the Anthropocene seeps into social science and political debates and translates as “all this mess is caused by humans in general”. This narrative is not only false–in fact, it is SOME humans who have caused mess, as has been demonstrated again and again (e.g., 100 companies are responsible for 70% of CO2 emissions)–it is also a hindrance to action. If the human species is the culprit, there’s little we can do about it. If dominant classes and contingent social relations are the problem, then we can attack it at the root. One cannot expect a meteorologist or expert on biogeochemical cycles to understand this. Others should. The hegemony of the apolitical Anthropocene narrative in environmental studies is thus due to a failure to integrate critical perspectives and strategic visions from outside the natural sciences.

RP: Marxism is the pillar of your alternative approach to the ecological crisis. In a reading guide published in Période you explain that you experienced a “materialist epiphany and realised that literally everything is at stake in the ecological crisis”. Could you tell us more about your itinerary and what led you, as a Marxist, to start working on ecology? To what extent the ecological crisis implies a renewal of Marxism?

AM: My climate action debut was in 1995, at COP1 in Berlin, the very first in the interminable series of UN climate negotiations (I describe this in some detail in my next book). But after that, I had ten years of activism in the Swedish extra-parliamentary ultra-left, during which I held climate and environmental politics in contempt: I considered these issues luxury, hippie, petty-bourgeois distractions from the class struggle, irrelevant to the Palestinians and other peoples in the Middle East–my main preoccupation in those years–beyond the material interests of the exploited masses of the world. I couldn’t have been more wrong, obviously. Unfortunately, this is the left’s own version of business-as-usual: climate and ecology as somehow less central and harder to identify with than working-class politics, trade unions, social inequalities, anti-racism, feminism or whatever else one is committed too and continues to bang on about. Instead, as Naomi Klein has pointed out, the climate crisis supercharges all of these classical fronts with existential urgency. But strange as it is, there are parts of the left around the world that still stick to business-as-usual and keep climate and ecology a footnote at best. They should be happy that they are generally so powerless; otherwise history would judge them harshly. As for myself, people around me dragged me into full climate awakening in 2005. Since then, I have worked on some other issues–Islamophobia, the far right, Palestine, Iran–but I have found it increasingly difficult to think on something else than ecology, and to avoid refracting everything else through it. Because it really is everything.

RP: Last year was marked by the massive irruption of the youth on the global warming. We see this movement as characterized by a broad politicisation without real anticapitalist radicalization and by a deep pessimism close to the “collapsologist” theories which call to embrace the catastrophe. How do you perceive theses movements of the youth and which political role can they play?

AM: I think it’s a bit unfair to say that the young masses on the streets embrace the catastrophe–they are desperate to avert it and not having to spend the rest of their lives walking around burning ruins. The current outpouring of worldwide popular climate anger is the most hopeful thing that has happened ever, on this issue. But due to the general processes of depoliticisation, the levels of ideological sophistication and strategic clarity in these mobilisations can of course be found wanting. But the impulse is there: those kids already raise demands targeting fossil capital–they know that oil, gas and coal companies have to be swept off the planet–and one shouldn’t discount the potentials for radicalisation. What will all these kids do in a year or two, if they wake up one morning and realise the capitalist states have still done nothing to end fossil fuels, no matter how much they struck from school and pleaded for their future? There will be dynamite in this generation.

RP: Luis Vitale, a Chilean revolutionary explained in 1983 that one of the two major challenges of Marxism was to “give a theoretical and political answer to the ecological crisis, because it is the survival of mankind which is at stake.” Politically, Marxism stays very marginal in the radical ecologist social movements, for the benefit of a kind of “diffuse” anarchism. How do you explain the gap between the relative dynamism of ecological Marxist theories–in Anglo-Saxon countries in particular–and the weakness of the political intervention of Marxists in these movements?

AM: Ecological Marxism has a tendency to cripple itself by staying inside academia. It needs to engage with and reach out to the actual movements in the field. Anarchist ideas should be combatted; they will take us nowhere. I think it’s time to start experimenting with things like ecological Leninism or Luxemburgism or Blanquism. But the weakness of Marxism in ecological politics is of course inextricable from its nearly universal weakness at this moment in time (i.e., one symptom of the crisis of humanity, alongside acidification of the oceans and everything else).

RP: In Revolution in a warming world, after mobilizing Lenin around the problem of the urgency of the revolution to stop the impending catastrophe, you explain that the climate movement has to be the linchpin “in any alliance drawing in the full spectrum of social movements to take down fossil capital”. Could you explain us more this hegemonic role that you give do the climate movement ? How do you articulate it with the centrality of the re-appropriation of the means of industrial production by the working class to reorganize it rationally and ecologically, which seems a natural axis for a Marxist environmental politics?

AM: I have thought less about this recently than my comrade Matt Huber. You should check out his work.

Originally published in Révolution Permanente, a (French) website is run by militants of the CCR, which is a tendency in the NPA, a French anticapitalist party. It is close to https://www.leftvoice.org

Andreas Malm teaches Human Ecology at Lund University, Sweden. He is the author of The Progress of This Storm: Nature and Society in a Warming World; Fossil Capital, which won the Isaac and Tamara Deutscher Memorial Prize; and Iran on the Brink: Rising Workers and Threats of War (with Shora Esmailian).