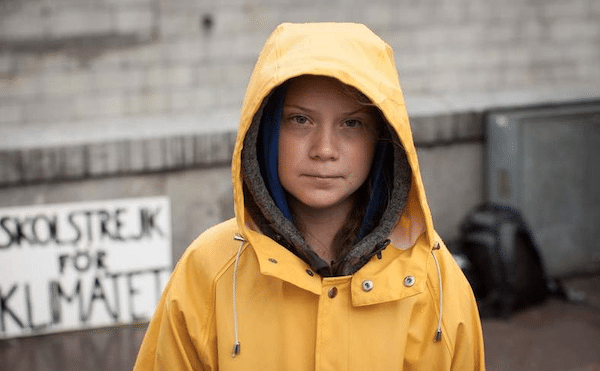 Defenders of capitalism, joined by some on the left, are attacking the young woman who has become the symbol of a mass movement. Our place is by her side.

Daniel Tanuro is a socialist and ecology  activist in Belgium. He is the author of Green Capitalism: Why It Can’t Work(Fernwood, 2014)

IN DEFENSE OF GRETA THUNBERG 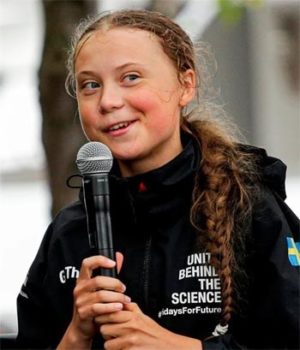 The young Swedish woman Greta Thunberg has faced an exceptional outpouring of hatred, expressed as the most vile macho attacks, the most sordid insinuations about her mental health, the lowest calumnies about her autonomy, and even barely veiled death threats.(1)

You don’t have to look far to find the source of these ever-growing waves of hatred. They flow from the national-populist, climate denying, sexist, racist and antisemitic extreme right-wing, which is spreading like a cancer, especially since Trump’s election, Brexit, and the successes of the German AfD, the French FN/RN and the Italian Lega, among others. The photoshop montages showing Greta alongside financier Georges Soros or a fighter of the Islamic State clearly show the antisemitic or Islamophobic intentions of these circles.

The links of the extreme right with fossil capital are proven, in particular through the European Institute for Climate and Energy (EIKE), which collaborates with the Heartland Institute, a U.S. climate denying think tank funded by the oil sector and the violently climate denying Koch Group, the most powerful private company in the US, active in the fossil fuel sector and chemicals.

If we dig a little deeper, we find in the campaign against Greta Thunberg the whole galaxy of collaborators in reactionary think tanks and other climate denying “institutes” funded by Exxon and Chevron. Notably the Competitive Enterprise Institute (CEI) from which came Myron Ebell, a member of the Trump transition team at the head of the EPA, Breitbart News, etc.

The main themes of the attacks on Greta Thunberg are the same on both sides of the Atlantic: that she should go back to school to learn what she doesn’t know; that she is a puppet in the hands of Al Gore and green capitalism; that those who pull the strings are using a disabled child to impose an emotional dictatorship; that her call for a strike is totalitarian; that the poor girl is a fanatic, a sick woman, etc.(2) Most of these elements were present in the comments made by Jordan Bardella (FN/RN) during Greta’s visit to the French National Assembly.

But climate denial does not explain it all, far from it. Hatred against Greta Thunberg is all the more vicious because the target is a woman, a young woman. A young woman who is not afraid to accept herself as she is, with, as she herself says, her different personality.(3)

When it comes to attacking women, what some call the “tradition of liberty” often makes France, unfortunately, the place where the most pestilential unpleasant smells are released. Those from Bernard Pivot exceed everything.(4) Given this character’s academic distinctions, this is an opportunity to recall a historical phrase: “Sir, you’re just a piece of shit in a silk stocking.” He brings to mind this political reality: sexism and machismo always build a bridge to the far right.

At first, the representatives of capital focused on co-opting Greta Thunberg and using her to neutralize the youth. Hence the invitations to Davos, the European Parliament, the National Assembly and many other official venues. Since she called for the unity of all against the threat, in the name of science, politicians thought they would put her in their pockets and show her that they were doing their best, etc.

But Greta Thunberg wasn’t fooled. In the European Parliament, after Juncker kissed her on the hand(!), she said:

It is important to tell the whole truth and the truth, in this case, is that a significant part of the left and the ecological community are howling with the wolves. Under the most diverse pretexts: “Greta is not anti-capitalist,” “Greta is not against growth,” “Greta is a star,” “It is not by chance that she is invited here or there,” “Greta plays the green capitalism game,” etc. Not to mention the purveyors of cheap psychiatry.

What they don’t mention is the real source of their anger: they are outraged at being shown up by a fifteen-year-old girl, out of nowhere, who has done more in one year to change the climate (no pun intended) than many supposedly militant organizations in thirty years.

Today, there is no doubt about it: after Greta’s performance at the UN, the rulers are changing their tactics. She pilloried them all without hesitation (“How dare you? You only talk about money!”) and her message had maximum impact worldwide. After the summit failed, she again called for strikes. As a result, the attempts to co-opt her are over. They aren’t smiling now.

The turning point is clearly visible in France: Macron blames Greta Thunberg for “antagonizing our societies,” advises young people to act as “citizens” rather than strike, or to go to Poland to demonstrate against the climate denier Duda. As for LVMH’s CEO, Bernard Arnault, he led the attack by blaming the young Swedish woman for “demoralizing youth” (same argument as Bardella) by denying the bright prospects of green capitalism. “How dare he?” Does this individual believe that the fortune he has made in the luxury industry for the rich “gives hope” to anyone?

Incredible as it may seem, given the context, powerful people are concerned, even worried. They fear a total break between youth and the old world. Their world of politics in the service of the rich, of competition between nations, of capitalism that destroys nature and life.

They fear that the global youth movement, as it grows, will involve other layers: peasants, exploited people, indigenous people whose forests are sacked, the oppressed in general. Impossible? Who knows? Who knows? The call of the Greta generation resonates deeply, because the 99% do not like the idea that our children’s world will be worse than ours.

Since the youth refuse to fall into line, the the 1% who are responsible for the disaster will use all possible methods to discredit the symbol of the movement, Greta Thunberg. The media that carried her to the top will drag her through the mud, the politicians who tried to use her will hand her to the executioner for witchcraft, and the far right will offer to do the job.

The hatred against this young woman is an expression of the struggle of the dominators to maintain their domination. Their fight is against youth and women, of course. But it also against employees, peasants, racialized people, indigenous peoples, different people, and the living in general. This is the class struggle in the Anthropocene.

Whatever Greta Thunberg’s limitations, our place is at her side, in the struggle she has constantly promoted and which it is now a matter of democratically organizing. It is the place of both the left and of any ecology worthy of the name.