WSJ, NYT Celebrate ‘Shale Revolution’ for Investor Class, Despite Its Leading to Our Doom

It’s not hard to figure out that corporate media represent the perspectives and interests of a small elite investor class of the U.S. population, rather than its vast working class majority. Simply compare the size of the “Business” section in major newspapers like the Wall Street Journal and the New York Times—ostensibly on opposite sides of the political spectrum—with the nonexistence of their “Labor” sections.

But it is hard to think of a more palpable example of corporate journalists seeing themselves aligned with the interests of the investor class, against literally everyone else on the planet, than the celebration of the “shale revolution” and U.S. “energy independence,” found in their cheerleading coverage of the U.S.’s journey to becoming the world’s top oil producer despite the ongoing climate catastrophe. 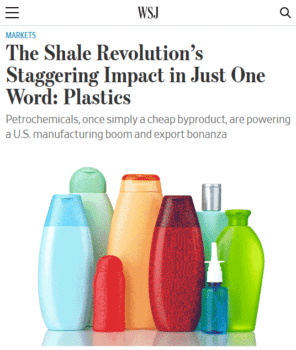 A 2012 editorial in the Wall StreetJournal (11/14/12), “Saudi America,” salivated over the prospects of the U.S. surpassing Saudi Arabia as the “world’s largest oil producer as early as 2020,” due in large part to fracking and other methods of extracting fossil fuels from underground shale deposits. But this enthusiasm for new sources of carbon to burn is virtually indistinguishable from the ostensibly “objective” coverage found in the regular reporting of the Journal and the Times.

The Journal’s “The Shale Revolution’s Staggering Impact in Just One Word: Plastics” (6/25/17) gloated over how “new parents in Rio de Janeiro buy[ing] baby food in plastic containers” are “bringing home a little piece of the U.S. shale revolution.” The Journal noted how the “boom in drilling” has lowered “the prices for the primary ingredients” the U.S. chemical industry uses to make “tiny plastic pellets” that are then “melted and shaped into plastic products,” and how “integrated oil firms” like Exxon Mobil and Shell are “racing to take advantage of the cheap byproducts of the oil and gas being unlocked by shale drilling.”

The Journal noted how “a spike in demand” for the raw materials used to manufacture plastics “could make drilling more profitable,” without once mentioning the climate catastrophe or the devastating pollution from plastics for the environment (Guardian, 6/9/18).

The Journal’s “U.S. Becomes Net Exporter of Oil, Fuels for First Time in Decades” (12/6/18) declared that the U.S. becoming “the world’s top producer of oil and natural gas” was a “symbolic milestone,” because a “renaissance in U.S. drilling” is solving the apparent “problem of scarcity” that had “defined U.S. thinking and strategy around oil, the world’s economic lifeblood.” The Journal relished the thought that “reducing American dependency on oil imports” meant that “America is moving closer to achieving ‘energy independence’” as a result of “the shale revolution.”

There was no acknowledgment that this meant that the U.S.—already the biggest carbon polluter in history—would be leading the planet toward an even greater climate disaster, against the opposition of less-developed countries with large indigenous populations (TeleSur, 4/1/19). 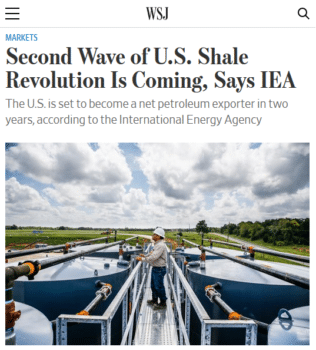 Fracking “has dramatically reshaped the global oil industry over the past decade,” the Wall Street Journal (3/11/19) reports—with no mention of how it’s reshaping the Earth’s atmosphere.

This year, the Journal’s “Second Wave of U.S. Shale Revolution Is Coming, Says IEA” (3/11/19), noted that the U.S. had surpassed “Russia and Saudi Arabia to become the world’s largest producer of crude oil,” with current output “hovering around 12 million barrels a day.” It credited “the use of hydraulic fracturing in the U.S. to drill for oil in shale rock, a process known as fracking,” with allowing the U.S. to “rival traditional producers like Russia and Saudi Arabia” for “market share.”

It also covered the International Energy Agency’s annual five-year outlook report, which projects that the U.S. is “expected to double its gross crude oil exports to 4.2 million barrels a day by 2024, while total exports of crude and refined products should reach 9 million barrels a day.” U.S. crude production, “driven by relentless growth in shale oil,” is “expected to account for 70% of the total increase in global production capacity over the next five years.”

If the Journal were interested in providing useful information to people interested in preserving a hospitable planet—instead of wealthy investors—another forecast it could have included in its recounting of the U.S. oil industry’s prospects from fracking would have been the UN’s Intergovernmental Panel on Climate Change’s announcement that carbon pollution needs to be cut, not increased, by 45 percent by 2030 to keep the planet below the critical 1.5°C warming threshold necessary to prevent irreversible devastation (Guardian, 10/8/18).

Perhaps it isn’t surprising that an outlet with “Wall Street” in its name caters to investors (though even financiers need a habitable planet). However, one can scarcely tell the difference between the coverage of the “shale revolution” in the “conservative” Wall Street Journal and the “liberal” New York Times.

The Times’ report (6/17/14) on “the shale revolution going global,” as “the world’s largest energy companies are on the hunt for new sources of what they call unconventional oil and natural gas,” described how these “multi-billion dollar investments” could “change the face of global energy markets.” The Times’ Mark Scott emphasized the size and profitability of the potential shale energy resources—rather than the dangers in

That Scott views the potential to transfer this buried carbon into the atmosphere as an opportunity rather than a calamity was demonstrated when he listed “environmental campaigners” who raise concerns about the negative consequences of fracking among the “many obstacles” for the otherwise “bullish prospects” for investors.

Some of the Times’ coverage of the “shale revolution” did mention the climate crisis—only to absurdly spin fracking as somehow part of the solution. The Times’ Eduardo Porter (1/20/15) discussed how the 1970s oil embargo motivated the U.S. to lay “the foundation of an industrial policy that over the span of four decades developed the technologies needed to unleash American shale oil and natural gas onto world markets.” The Times noted that “environmentalists against any government involvement in the fossil fuels business will hate this,” but still made the curious argument that unleashing this carbon could help “deliver a low-carbon future,” because the “cheap oil” following the U.S.-driven supply glut would create an opportunity to raise revenue for “new energy technologies” by raising “gas taxes without angering voters.”

The neoliberal ideology of the Times was on full display when Porter portrayed the “heavy government investment in research and development” and the “collaboration between government and business in pursuit of energy independence”—i.e., government subsidies for fracking—as a “valuable lesson” for combating climate change. An alternative left-wing strategy for combating climate change that doesn’t depend on fracking—which contaminates our drinking water and releases methane, a potent greenhouse gas—in the form of a Green New Deal that would ban fracking and dramatically raise taxes on heavily subsidized oil corporations, not consumers, wasn’t considered (FAIR.org, 9/6/19).

The Times’ “Oil Boom Gives the U.S. a New Edge in Energy and Diplomacy” (1/28/18), by Clifford Krauss, depicted the U.S. oil industry as a resilient underdog overcoming fierce enemies to liberate captive populations, as well as a cudgel to beat down U.S. enemies. Krauss narrated how oil companies’ “success” came despite “the efforts of Saudi Arabia and its oil allies to undercut the shale drilling spree in the United States,” and how the oil industry “overcoming three years of slumping prices” to challenge the “dominance of Saudi Arabia,” and undercutting “Russian energy dominance over Eastern Europe,” constitutes evidence of the “resiliency” of the “shale boom.” He noted how a “resurgence in American oil production” is also offering Washington “strategic weapons once unthinkable,” by providing a “supply cushion” whenever “political turmoil” in other countries threatens to “interrupt flows to markets,” thereby giving “leeway to apply sanctions on other producers” like Iran, Venezuela and Russia.

The Times awkwardly inserted brisk mentions of environmentalists arguing that shale drilling is “extending the life of fossil fuels to the detriment of the environment” and “cleaner energy,” but moved on to praise the “sheer force” of U.S. oil production, the “supremacy of its technology” and their “unmatched pipeline, refinery and storage structure” in capping oil prices. It also brushed off the harmful effects of increased oil production with blithe predictions that production and demand for oil will be curbed “over the next few decades,” when it would already be too late. 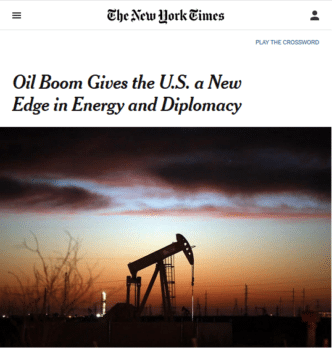 The main downside of the “oil boom” seen by the New York Times (2/3/19) is that it might “drive down prices too much.”

The Times’ Krauss (2/3/19) continued this heroic portrayal of the U.S. oil industry this year when he described how the Permian Basin straddling Texas and New Mexico “withstood the onslaught” of a “global collapse of oil prices,” boasting of its becoming the world’s “second-most-productive oil field” with a “combination of technical innovation, aggressive investing and copious layers of oil-rich shale.” The Times exulted that the “bounty” of oil has “empowered the United States diplomatically,” allowing it to “impose sanctions on Iran and Venezuela without worrying much about increasing gasoline prices.”

In the style of a Journal report, the Times’ Permian Basin story clearly aligned itself with the interests of wealthy investors by omitting all consideration of the ongoing climate crisis and environmental harm, with Krauss describing how the formation is “bursting with production and exploration,” with the “biggest concern” being “how to create more capacity to get all that oil to market.” The “biggest risk” of “too much output” is not that it might render the atmosphere incapable of supporting civilization, but that it might “drive down prices too much and jeopardize their profitability.”

To be fair, the Times and the Journal also provided negative coverage of the “Shale Revolution”—but, again, primarily on behalf of wealthy investors profiting off the planet’s destruction. A Times news article (6/30/19) reported that “U.S. Oil Companies Find Energy Independence Isn’t So Profitable,” conveying worries that “the industry” might possibly be forced to “leave oil and gas in the ground” to combat climate change. The Journal has reported on “shareholders’ disillusionment with shale,” and shale executives emphasizing “free cash flow” to investors, rather than promises to “ramp up” production, as in the shale revolution’s golden years, because shale stocks have “reached historic lows” (Wall Street Journal, 8/13/19, 9/9/19, 9/29/19).

The bipartisan expansion of U.S. oil production is a major indicator that Washington has never taken the climate catastrophe seriously, viewing U.S. oil reserves not as a peril that needs to be kept underground but as an opportunity for profit and geopolitical advantage. Examining how corporate media have cheered on the “shale revolution” and U.S. “energy independence” suggests that the “conservative” Wall Street Journal and the “liberal” New York Times sound the same because they are both owned by for-profit corporations owned by the same investor class, which has a strong financial stake in continuing to profit off the disastrous status quo (FAIR.org, 8/1/17).