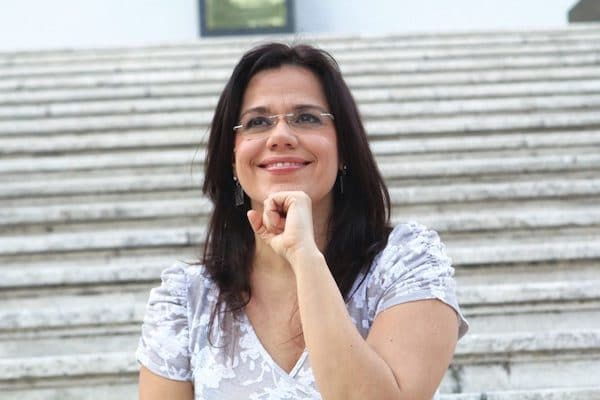 Blanca Eekhout is the Minister of People’s Power for the Communes and Social Movements of Venezuela and a woman linked to revolutionary militancy long before President Hugo Chávez came to power, whose team she was part of. Eekhout has been a member of parliament, leader of the United Socialist Party of Venezuela (PSUV) and also held the position of minister of People’s Power for Women and Gender Equality, making her the ideal person to enlighten us on the role of women in the Communes, and beyond that, how the project of the Communal State is linked to feminist socialism.

The first thing I want to ask you is if the Communal State proposed by Commander Chávez is still valid in the plans and in the political will of the Government?

Not only does it remain in force, it is essential to the homeland at this moment, to construct the new State, and that new State, to guarantee it is the one set forth in our Constitution; the social State, the State of Law and Justice, must be the Communal State. There is no possibility of guaranteeing equality, or effective rights that are not the privilege of a minority, but rights of all, justice and social protection for our people, except on the foundation of the Commune.

President Nicolás Maduro reiterated this a few days ago, in a meeting we had with him. He told us that he knows that he has a historical responsibility to Commander Chávez, who told him in the last ministerial cabinet he led, after the victory on October 7, “Nicolás, I entrust you with the Communes as I would entrust my life to you. Chávez lives in the Communes”.

Does this other way of building the state come up against bureaucracy?

This is another vision that Commander Chavez reaffirmed and that came from Gramsci: the contradiction between what has not yet died and what has not yet been born. That old State that comes from the Colony and its provinces, and that continues in dispute. That old model is still there and in war scenarios takes advantage of any darkness to impose itself.

Does that mean that this old state still subsists?

That is what the battle is about.

In the midst of these contradictions and the historic struggle to build the new State, the government has taken on several responsibilities, including that of Minister of People’s Power for Women and Gender Equality.

Do you claim to be a feminist?

Yes, I believe that feminism in Venezuela is socialist and has everything to do with the construction of the Communal State.

What has been the role of women in the construction of the Communal State? Do they have a leading role?

The feminine is a determining factor in the Communal State. But women, both in rural and urban areas, are also decisive.

Suddenly, climbing into spaces of power, more comrades are appearing, but in the territorial base it has always been the women who are leading and directing, who maintain the organization, who militate most forcefully.

Years ago I researched the participation of women in thematic areas of discussion in the Communes and I observed that they were in the majority in all areas, except Economy and Defense. Has this changed or are the Economy and Communal Defense still predominantly assumed by men?

I think that has been changing. In the case of security, the female component achieved by the militia is very important. The truth is that we still have the task of addressing the gender issue throughout the popular organizational framework, but I do believe that this has been changing, because women are becoming increasingly involved in the Bolivarian Militia in their territory.

In economic terms, in the Local Supply and Production Committees (CLAP) -which have yet to make sufficient progress in terms of production- women occupy 90% of the management. And it turns out that CLAP is now one of the fundamental engines of our economy; so the economic issue ceased to be eminently masculine. The economic war, the whip of counterrevolution, has forced women to undertake the guaranteeing of food distribution and planning. The food houses, for example, now have productive yards, where the majority are women who conduct the census, coordinate with street chiefs, evaluate.

Now we are carrying out a census, establishing a system of registration of popular power through the Patria card and an app to carry out a population census of their communal council, which will allow us to gather more precise information on gender and commune.

October 25 has been established as Feminist Socialism Day, in celebration of the day Chavez said that all socialists should be feminists and called on feminists to assume feminism as a strategy. In his words it would seem that indeed feminist socialism and the Communal State are intertwined in reality. Is that so or is that relationship still under construction?

We women were the first to take on Hugo Chávez’s proposals for Venezuela in a radical way. As I said at the beginning, I am not only referring to women, but in general to “the feminine”, due to the characteristics of our Revolution. Faced with the coup d’état of April 11, 2002, for example, the people mobilized primarily for love, and I am not saying that there was no great political conscience, but the fundamental motive for the conscience was love, and that is associated with the feminine, which is in both men and women.

During the Independence process, women played a determining role and Bolívar was clearly aware of this. Equally key was the role of women in the entire process of indigenous resistance, for the formation of Caribbean society and the contribution of Maroon women in the cumbes.

But at that time, historiography made the role of women invisible. During this new historical process, is its protagonism visible?

We can see that patriotic women’s bodies joined the National Pantheon for the first time with Hugo Chávez, and not only women, but also indigenous women, black women, meaning that a vindication of the memory of women in history began. Women began to play a relevant role in the Bolivarian National Armed Force (FANB) with Hugo Chávez, and also in the People’ s Power, not only because they had not been there before, but because now they are genuinely recognized as the vanguard.

And is this participation feminist or is it only limited to the role of caregivers imposed on us by patriarchy?

The Revolution has assumed that care is a state affair. That social protection, and the entire role that we women have assumed for centuries, is really the fundamental task of the State. That which we can say represents a kind of condemnation of women was what kept the social fabric alive in spite of capitalism. Therefore, for the State to assume responsibility for the protection and care that until that moment was a solitary role for women, is one of the defining characteristics of our feminist socialism.