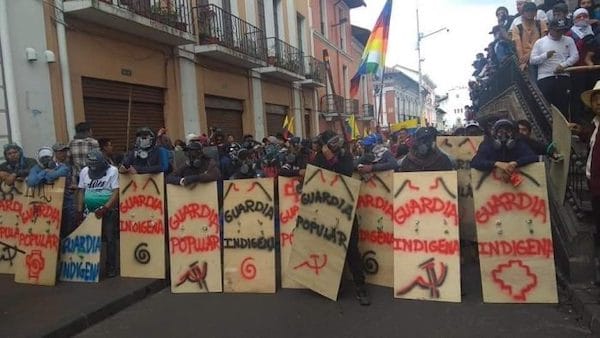 The IMF Does Not Fight Financial Fires But Douses Them With Gasoline- The Forty-Second Newsletter (2019).

Quito’s streets tremble between aspiration and repression; the smell of tear gas and the shouts for freedom reverberating in equal measure from one part of the city to another. President Lenín Moreno’s State of Emergency (October 3) and Curfew (October 12) give the men with guns more authority, but–despite hundreds of injured protestors and at least five dead–the violence has not broken the enthusiasm on the streets. The protests continue. Moreno’s options will soon run out. The oligarchy and the International Monetary Fund (IMF)–with a wink from the White House–might ask him to resign. They like their comprador to be credible.

On 13 October, Moreno had to promise to withdraw Decree 833. Pressure from the streets, from the United Nations, and from the Ecuadorian Episcopal Conference forced him to the table, where a televised discussion was held. The indigenous leaders won the ‘debate’–they were much more prepared and far more humane than the president and his clumsy ministers. Moreno and his team–Minister of Government María Paula Romo and Minister of Defense Oswaldo Jarrín–left the room for a recess and surrendered. This is a triumph for the people. But now Moreno must go to the IMF. What pressure will it put on him? The battle continues. 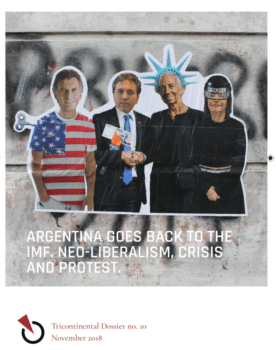 Dossier no. 10- Argentina Goes Back to the IMF.

The IMF’s board gathers in Washington, DC for its annual meeting. The Fund’s new leader is Kristalina Georgieva–from Bulgaria–who used to be at the World Bank. Her job is not easy. The IMF’s World Economic Outlook, published in July, calculates that 2019 world output is expected to shrink to 3.2%, compared to 3.8% (2017) and 3.6% (2018). In order to remain optimistic–with little data to support this attitude–the Fund estimates that world outlook will rise to 3.5% in 2020. But Georgieva and her associates on the Fund’s board know that matters are far grimmer. ‘Global economic growth continues to disappoint’, Georgieva said recently. Trade wars and high debt levels contribute further to a general crisis of capitalism.

The new Trade and Development Report (2019) from the UN Conference on Trade and Development (UNCTAD), published in late September, says that a recession in 2020 is more than likely. Over the past few years, growth rates have been sustained by ‘one-off tax cuts and unsustainable deficits, made all the more precarious by a rapid build-up of private debt positions, particularly in the corporate sector’. Meanwhile, ‘unemployment figures hide problems of insecure jobs and discouraged workers’. Add to this ‘disrupted supply chains, volatile capital flows, and rising oil prices’, and it seems inevitable that ‘on these trends a slowdown–and possibly even a recession–looks likely’.

There is nothing that the IMF can do. It is beholden to the United States, from whom Georgieva hopes to raise funds towards the IMF’s cache of around $1 trillion. The United States continues to dominate the IMF. In 2015, the IMF released a staff study that argued against ‘supply-side economics’, suggesting that the policy that suggests tax cuts and budgets cuts does not lead to utopia. Instead, the authors write, tax cuts and budget cuts produce results whose benefits ‘do not trickle down’. The implications of this study did not penetrate the upper floors of the IMF, neither the office of the managing director nor the board. It is business as usual at the IMF. Its own economists are not as important as the whispers from the U.S. Treasury Department and the White House.

Late last year, the European Network on Debt and Development (Eurodad) released an important study on IMF loan conditionalities and the impact this has had on health care. The author–Gino Brunswijck–looked at IMF loans to twenty-six countries between 2016 and 2017. In twenty of these twenty-six countries, ‘people have gone on strike or taken to the streets to protest against government cutbacks, the rising cost of living, tax restructuring and wage bill reforms pushed by IMF conditionality’. Since the study came out, the people of Argentina, the Czech Republic, Ecuador, Egypt, Haiti, Jordan, Morocco, Pakistan, Sudan, Tunisia, and other countries have taken to the streets. For them, there is no alternative: either they protest, or they starve. 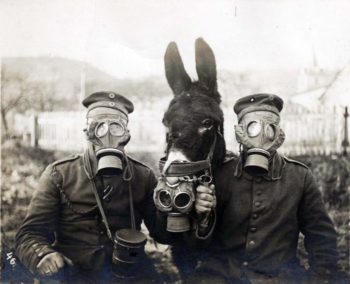 Several important points emerge from the study by the European Network which bear reflection:

Camouflaged behind IMF phrases such as ‘forging a stronger social compact’ comes the old fashioned tonic of austerity for the poor, generosity for the rich. The agreement between the IMF and Ecuador called upon Moreno’s government to cut wages and to cut 140,000 public sector employees, while energy prices and fees for government services would be raised. The rich would pay none of the price. The money paid to buy gallons of tear gas and riot police equipment could just as easily have been paid out for health care and education. The ‘social compact’ that the IMF finds itself building in each country is forged not through the bonds of society but through the barricades of protest and repression.

Each IMF chief comes to the top office with a signature agenda. Christine Lagarde wanted to push gender equity, which meant–for Lagarde and the IMF–increasing the number of women in the workforce. In one of the staff papers, the IMF researchers pointed out that this would only be possible if countries invest in infrastructure (such as public transport), promote equal rights for women (such as equal inheritance laws and property rights), and promote access to affordable childcare. But, most IMF loan agreements demand cuts in public infrastructure and in childcare and healthcare. IMF policy, in fact, went against even the limited agenda promoted by Lagarde.

Lagarde, who is now in the running to head the European Central Bank, could have done well to listen to Ofelia Fernández, a 19-year-old Argentinian militant who is running for a seat in the Buenos Aires government. Ofelia does not want to define her politics narrowly. She wanted to make it clear to me last month that feminism must take up all the social issues from a feminist perspective–not allow itself to be restricted to ‘women’s issues’, which are themselves, she pointed out, everyone’s issues. In the poorer parts of Argentina, organisations have emerged to fight against the outcome of the crisis. Hunger is a serious issue, with special emphasis on the hunger of children. Most of the leaders of these popular organisations, Ofelia said, are women. Their fight around the economy of care and against austerity must also be seen as a feminist fight. The fight against hunger, Ofelia said, is also feminism.

Georgieva comes to her post eager to tackle ‘climate risks’ and to urge a move to a post-carbon energy system. Her policy form will be cuts to energy subsidies and a rise in carbon taxes. A recent IMF study shows that gasoline and household energy bills should rise dramatically to limit global warming. What we have here is austerity packaged as environmentalism. Rather than promote a policy slate of regressive taxes on the poor, the IMF could urge more expenditure on public transportation and on a transition from carbon-based energy to more sustainable forms of energy. But this is not the temper of the IMF. Neoliberal policy and austerity are its contours.

The headline of this newsletter does not come from a radical poet. It comes from the Wall Street Journal. During the Asian financial crisis in 1998, the WSJ ran an editorial that said that the IMF ‘has not been fighting financial fires but dousing them with gasoline’. The IMF pours the first tranche of gasoline. 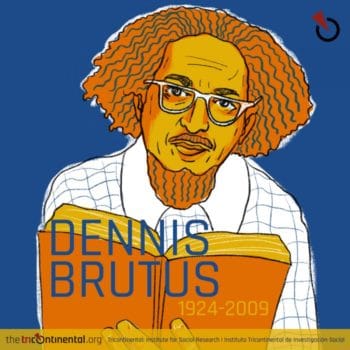 People want to douse these flames. Their hopes explode out of the verse of Dennis Brutus (1924-2009), South Africa’s anti-apartheid poet:

There will come a time we believe
when the shape of the planet
and the divisions of the land
will be less important.
We will be caught in the glow of friendship.
A red star of hope
will illuminate our lives.
A star of hope.
A star of joy.
A star of freedom.