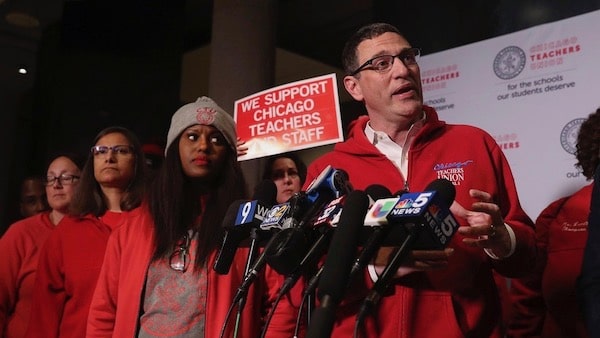 After two weeks of strike by Chicago teachers and service staff, the Chicago Public Schools (CPS) and the Chicago Teachers Union (CTU) have arrived at a tentative deal, bringing an end to the strike. The city administration agreed to all the demands of the protesting teachers which would lead to the single biggest hike in spending on public education, of any school districts in the U.S. in recent memory. Classes are set begin today November 1.

The teachers demanded that the CPS add more days into the school schedule for ongoing academic year, to make up for the days lost because of the strike. They also demanded to be paid for the compensated instructional days. After last minute hesitation over this demand, the city administration eventually caved in after teachers and staff threatened to continue with the strike.

The deal has been ratified by the Chicago chapter of the Service Employees International Union (SEIU), Local 73, who organized the over 7,500 CPS service staff for the strike. The CTU shall now send the deal to its local branches, and is expected to be ratified within a week. Once ratified the strike will be officially considered to have been concluded.

Mayor Lori Lightfoot refused to grant this one last demand on Wednesday night, claiming in a press conference that the CPS will not be dealing with “any new issues” and called the CTU’s demand a “curve ball”, even though state laws make it mandatory for school districts that have lost more than 9 school days to make up for it.

The 9th school day lost to the strike was Tuesday, and the tentative deal was only properly negotiated and agreed upon between Tuesday and Wednesday, which meant teachers could only legally demand for the compensatory days on Wednesday. It was also understood as the convention has been for CPS to compensate for days lost to teachers strike, as pointed in the CTU website.

On October 31, the 15th day of the strike, the teachers and the support staff marched to the City Hall in the morning to continue putting on pressure for the demand. The CTU leadership has stated that they “have a tentative agreement, but we do not have a return to work agreement” (emphasis added).

Legally, the CPS would have to add at least two school days as compensation. In their late night press conference after the tentative deal was struck, CTU leaders categorically refused to work without extra pay for those compensatory days. CTU president Jesse Sharkey said that “by not restoring days of instruction to our students lost during the strike, the mayor is making it clear that she is more concerned about politics than the well-being of students.”

CTU vice-president Stacy Davis-Gates also clarified that the mayor’s disappointment and anger is misdirected at the teachers, who according to her “went on strike to deliver on the education platform that she campaigned on.”

As the teachers and the staff prepared to march to the City Hall, Lightfoot caved and said that she was open to negotiate on the compensation days. After less than two hours of negotiation, the teachers finally clinched the historic victory, as the city agreed to add five more instruction days with full pay.

The most notable aspect of the entire strike was the unity between teachers and the grossly underpaid non-teaching staff at the CPS. This was best demonstrated today, when CTU’s demand received unconditional support from Local 73. Even though non-teaching school staff have overwhelmingly ratified the new deal offered by CPS, with over 97% voting in favor of it, they extended their support to the teachers calling on the mayor to add instruction days in the interest of the students.

In their statement celebrating their historic win, Local 73 reiterated their support for CTU and added that they will continue to strike along with the teachers. “SEIU Local 73 stands in solidarity with CTU, whose members remain on strike, and is encouraging all members to honor CTU picket lines,” the statement read.

It added that, “we believe the solidarity forged through the strike between our two unions will have long lasting implications for the future of our schools as well as the labor movement in Chicago.” 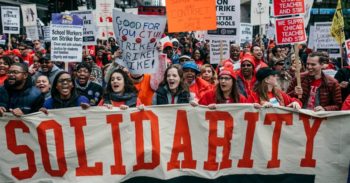 The agreement: a historic win and a way forward

After 15 days of unrelenting protests, the 25,000 or so striking teachers won an agreement, that both CTU and Local 73 have called a historic win. Some of the most crucial promises of the new five year contract under the deal include increasing the number of support staff and social workers, wage increases ranging from 17% to 40%, more investment in school infrastructure like libraries, medical units, sports and language instructions, up to 40 sick days annually and up to 244 sick leave bank since 2012, reduction of overcrowded class sizes in a time-bound manner, and a generous expansion of special education assistance across all the 660 schools.

According to the CTU website, teachers have worked on an expired contract for nearly 122 days. It was only after months of negotiation failed to bring any result that the teachers and the service staff from more than 600 CPS schools voted for a strike action on September, and began the strike on October 17. Once ratified by the unions and passed by the CPS, the new contract will be valid for 5 years, beginning retroactively from July 1, 2018 and ending on June 30, 2023. This can compensate for the apparent abuse of labor and will have the city earmark hundreds of millions of dollars to make the contract conditions happen.

“The newly ratified contract is a start in creating a pathway out of poverty for many of the workers,” said the statement by Local 73. “Today’s agreement will move us one step closer to smaller, enforceable class sizes, equitable pay for educators and paraprofessionals, and more support for our English Language and special education students,” said Davis-Gates.

After the strike, the next step forward for the CTU would be to advocate for a pending bill in the Illinois state legislature, which proposes the formation of an elected Board of Education to administer the school district of Chicago and CPS. Currently, the city has a board entirely appointed by the mayor.

The proposal has had bipartisan support in both the houses of the Illinois General Assembly. Different versions of the bill have been passed in the past, but none could reconcile with each other. The interest for the bill was renewed after the strike, with presiding officers of both the legislative houses and the governor voicing support for it, to bring an end to the strike and avoid future actions.