Tensions have been rising in Bolivia following the general elections conducted on October 20. The right-wing opposition has refused to recognize the results which saw president Evo Morales of the Movement Toward Socialism (MAS) win 47.07% of the votes cast to clinch a first-round victory over Carlos Mesa of the Citizen Community alliance who won 36.52%. Opposition sectors have claimed that as initial results indicated that a run-off election would be necessary, electoral fraud was committed in order to give Morales the 10-point margin he needed to win in the first round.

However, since then, the already divided opposition has been fumbling to arrive at a united position and demands with regards to the elections. Their lack of coherency has illustrated that the true intentions of the opposition are not to defend Bolivian democracy and democratic institutions, but to push for regime change and engender chaos.

For example, in response to growing tensions with regard to the results, the Bolivian government invited the Organization of American States (OAS) to carry out an audit of the electoral process in order to verify the validity and legitimacy of the results. This audit began on October 31. Though the OAS had spoken out the day after the elections on October 21 and called for a second round of polls, showing a clear bias against Morales, several sectors of the opposition declared that they reject this audit.

Initially, presidential candidate Carlos Mesa accepted the OAS audit as his position has consistently been to insist on holding run-off elections. However, after meeting with Fernando Camacho, the leader of the opposition in Santa Cruz, which is the stronghold of anti-Morales forces, Mesa announced that he rejected the audit by the OAS. If they really believed that fraud was committed, why would they reject the audit, especially when the auditor is anything but pro-Morales?

In the meantime, opposition sectors across the country have been escalating pressure on the streets to support their demands for the annulment of the results. Juan Ramón Quintana, the minister of the presidency in Bolivia, told Marco Teruggi at Sputnik News that “What we are seeing is a path to a coup that is being unveiled in an intense way and at different speeds in all of the national territory.” 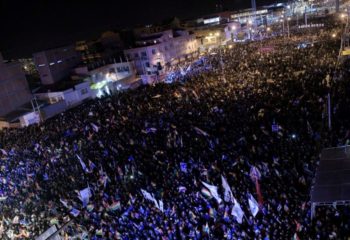 For the past several days, thousands have been on the streets mobilizing in support of Evo Morales. Photo- Evo Morales twitter

Small-scale protests have also been held in other cities, and recently, the capital, La Paz, has become the epicenter of the opposition protests.

However, it is not just the right-wing that has been mobilizing. Several massive mobilizations have been carried out in support of Evo Morales and his victory in the latest elections, and to denounce the ongoing coup effort. On October 28, thousands of people from peasant movements, youth movements, miners’ unions, and Indigenous movements took to the streets in El Alto, a largely Indigenous, working-class city neighboring La Paz and a historic base of MAS, to defend their votes and the results.

Thousands of miners mobilized in La Paz on October 29 and one of the central chants–“Mesa, thief, we won’t forget October”–refers to the massacre which occurred in El Alto on October 11, 2003 during the “gas war,” while Mesa was vice-president, and more than 80 people were killed and hundreds injured.

On October 30, an even larger mobilization was carried out and thousands of miners, Indigenous people, neighborhood organizations, youth activists and citizens marched from El Alto down to La Paz in support of Evo Morales. The chant “Evo you are not alone dammit!” was the central cry of the people. 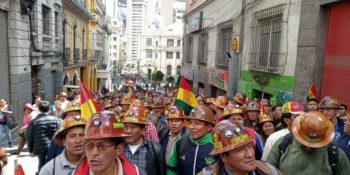 The following day, on October 31, thousands arrived at La Paz from different parts of the country to join mobilizations in support of Evo Morales. In light of the growing attacks from the opposition, participants of the mobilization decided to stay overnight in a vigil at Plaza Murillo which is the center of political life in the capital and where the presidential palace and the National Congress of Bolivia are located.

Later in the day, sectors of the opposition in La Paz gathered to hold a ‘cabildo’ or an open meeting where several resolutions regarding their position and demands were approved. Marco Teruggi reported that these include the demand that the elections be annulled, the resignation of Evo Morales, the rejection of the audit of the OAS, a call for new elections, the creation of a new Supreme Electoral Tribunal, and to “radicalize the pressure mechanisms.”

Following the cabildo, opposition protesters decided to march towards Plaza Murillo and attempted to violently break through the line of police protecting the MAS supporters and miners who had camped there overnight. The violent clashes involving explosions of dynamite and fireworks set off by opposition protesters lasted until midnight.

Government authorities and people’s movements in Bolivia have denounced that tensions are escalating every day and it is nearing a coup-like scenario. Both Evo Morales and vice-president Álvaro García Linera have denounced the intentions of the right-wing opposition to engender chaos and destabilize the country with violent protests and strikes.

Juan Ramón Quintan told Teruggi that “There is no doubt that it is a coup financed by the United States, they have learned to move their pieces well, especially to sustain a narrative against the government.” He added that “Bolivia will convert into a great battlefield, a modern Vietnam because here the social organizations have found a horizon to reaffirm their autonomy, sovereignty, identity.”

Internationally, people’s movements and political leaders have also rallied behind Evo Morales and in defense of Bolivian democracy. Yesterday, a Twitter storm was held with the trending hashtag #EvoPresidenteLegítimo (Evo Legitimate President) and people from across the world joined to lend their support to Morales and the process of change in the country and to reject the ongoing coup attempts.