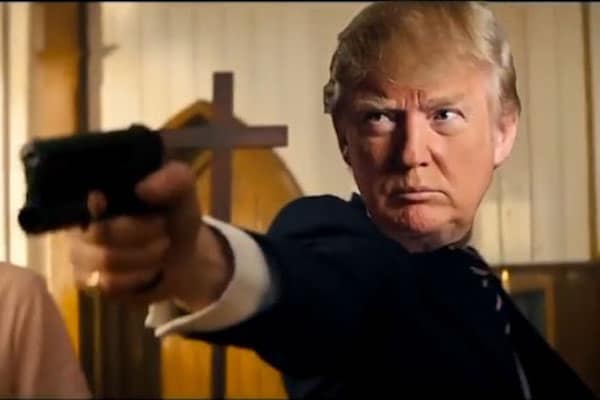 In the beginning was the profile of the Nazi next door, an inexplicable decision by the New York Times (11/25/17) to profile a right-wing extremist in the most sympathetic light possible. It was the most outrageous example of an outrageous genre of MSM—and particularly NYT—reporting: the never-ending effort to profile, study, explain, excuse and rationalize Trump voters. Without, of course, referring to them as racists. White men are always news that’s fit to print.

The article was met with howls of protest across Twitter, but among the many apt responses, Bess Kalb’s description (11/25/17) captured my heart and gave me the single most useful phrase of the Trump era: “Nazi-normalizing barf journalism.”

I don't mean to sound intolerant or coarse, but fuck this Nazi and fuck the gentle, inquisitive tone of this Nazi normalizing barf journalism, and fuck the photographer for not just throwing the camera at this Nazi's head and laughing. https://t.co/Pxfx2KU9AN

Again and again during Trump’s presidency, corporate media have fallen over themselves to find acceptable ways to describe utterly unacceptable behavior, policies and decisions—none more so than the New York Times. In every era, the Times’ center of gravity has been the legitimation of power, and the Trump era is no different. The paper’s obvious disdain for Donald Trump is continually cloaked in rationalizing headlines and descriptions. It’s as if they can’t help themselves—the stability of US institutions is more important than their integrity, and so they must normalize what should never be normalized.

You get the idea. 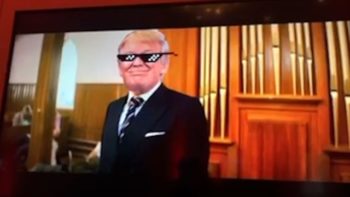 The New York Times chose to illustrate its story (10/13/19) about an ultra-violent pro-Trump video with this image….

All of it is Nazi-normalizing barf journalism. In wrapping human rights abuses, lawbreaking, lies, corruption, cruelty, racism, misogyny and other abhorrent dimensions of the Trump administration in the familiar language and themes of Washington politics, the Times is actively helping stabilize the regime. We read these headlines and think “business as usual” rather than “this is intolerable, I must act.”

In a recent example I find particularly troubling, the New York Times (10/13/19) reported on a video meme mashup, shown at a pro-Trump conference at one of Trump’s resorts in early October, showing Trump massacring members of the media and political opponents.

In an era where both hate crimes and domestic terrorism (including mass shootings) are rising at an alarming rate, the celebration of violence in the name of the Trump brand is a disturbing escalation in the normalization of political violence.

Trump has long invited his followers to violence. On the campaign trail, he promised to pay legal costs if his supporters beat up protesters, and advocated for torture “much stronger than waterboarding.” In September, he suggested that whistleblowers should be executed. He has pardoned war criminals and other human rights abusers (e.g., Michael Behenna, Joe Arpaio). Trump also admires and glorifies violent authoritarians, like Rodrigo Duterte, Recep Ergodan, Kim Jong-un and, of course, Vladimir Putin. All this in addition to the violence his policies are wreaking.

There is not a direct line between Trump referring to immigrants as vermin who will “infest our country” and the massacre of immigrants at an El Paso Walmart. Neither the antisemitic conspiracy theory that George Soros was funding migrant “caravans” from Central America, nor Trump’s lie about Middle Easterners infiltrating the caravans, is solely responsible for the murderous attack on a Jewish synagogue in Pittsburgh. Yet if these bigoted tropes did not cause massacres, surely they are part of the environment that has fueled them.

…rather than an image, say, of “Trump” shooting “Black Lives Matter” in the head.

Speaking of antisemitism, Trump’s “fake news” has always been one shade shy of Hitler’s “Lügenpresse” (“lying press”). White supremacists have long referred to the paper of record as the “Jew York Times.” Given Trump’s constant description of the media as “the enemy of the people,” the possibility is ever-present, in this age of mass shootings, that someone will walk into a newsroom and open fire. If I’m honest, it surprises me that this has happened only once since Trump took office.

None of this found its way into the Times’ coverage of the video. Instead, there are denials by lots of people, saying they neither saw nor knew about the video; and then this at the end:

Throughout his 2016 campaign and presidency, Mr. Trump has sought to demonize the news media, partly out of frustration about the coverage of his administration and partly because he likes to have an opponent to target.

This is Nazi-normalizing barf journalism. Poor Trump; he’s just frustrated by the bad press. Responding by labeling journalists liars and enemies of the people is just what most of us would do in the same situation. Plus, he likes having a foil. A reasonable strategy.

I want to know how Michael Schmidt and Maggie Haberman (the bylined reporters) know that these are Trump’s reasons for demonizing the fourth estate. It’s a pretty definitive sentence, assigning motivation without any source or documentation. (Unlike the following sentence, which has at least anonymous sources: “Mr. Trump has also sought to undermine confidence in the mainstream media, some of his advisers acknowledge privately, to make people doubt the accuracy of less favorable accounts of what goes on in his administration.”)

But more importantly, no, it is not OK for the president of the United States to baldly claim that documented reporting is “fake news”; that media are the enemy; and that journalists are bad people. It is, in fact, extremely dangerous. It undermines one of the most important checks on government power, and, as the video itself attests, it invites violence against journalists. The New York Times should say so.