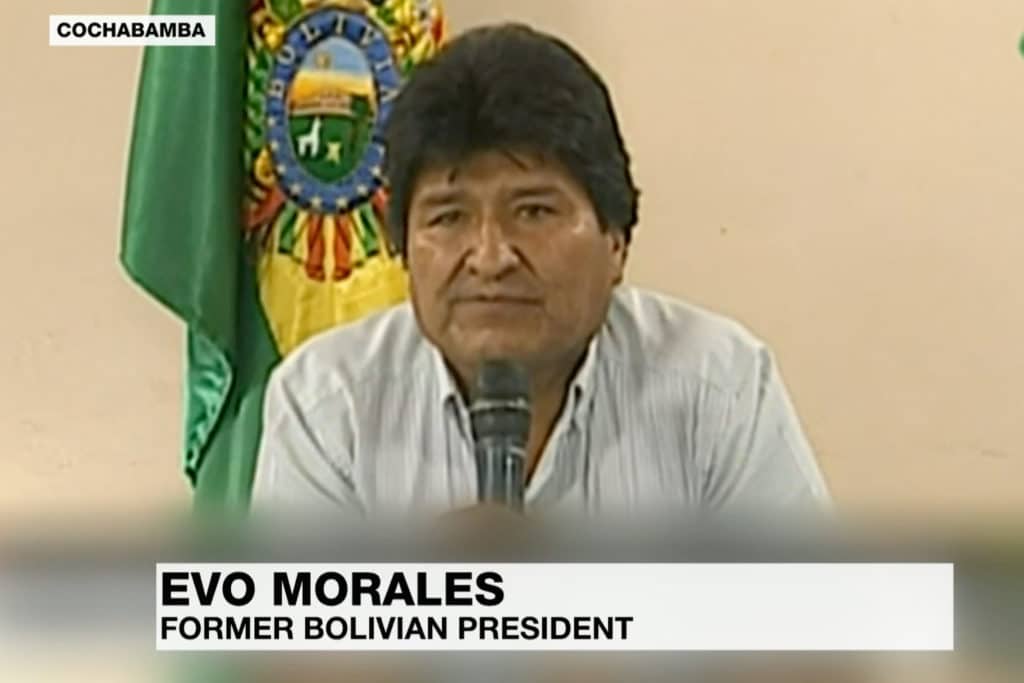 Former Bolivian President Evo Morales condemned Monday right-wing opposition leaders Carlos Mesa and Lusi Camacho for failing to stop the violence in the country and warning that they intend to blame him for such violence instead of taking responsibility following the coup against his leftist government.

“Mesa and Camacho, discriminators and conspirators, will go down in history as racists and coup plotters,” Morales said in a tweet early Monday morning.

“That they assume their responsibility to pacify the country and guarantee the political stability and peaceful coexistence of our people. The world and Bolivian patriots repudiate the coup.”

He added that those behind the coup against his government, who had vandalized his house and burned his sister’s house “now lie and try to blame us for the chaos and violence they have caused. Bolivia and the world witness the coup.”

He concluded his morning tweets with thanking the solidarity shown by his supporters in Bolivia and abroad. “Very grateful to the solidarity of the people, brothers from Bolivia and the world who reach out with recommendations, suggestions and expressions of recognition that give us encouragement, strength and energy. They moved me to tears. They never abandoned me; I will never abandon them,” Morales said.

Evo Morales was forced to resign Sunday after senior army and police chiefs called on him to do so following weeks of right-wing unrest and violence against his Oct. 20 elections victory, in what his government has called a coup by opposition forces in the country.

“I decided to resign from my position so that Carlos Mesa and Luis Camacho stop abusing and harming thousands of brothers … I have the obligation to seek peace and it hurts a lot that we face Bolivians, for this reason, so I will send my letter of resignation to the Plurinational Assembly of Bolivia,” the former president of Bolivia said in a press release.

Bolivian Vice President Alvaro Garcia Linera also said that he was resigning from his position. The two leaders said that they would be handing their resignation letters to the country’s National Assembly.

Currently, the line of succession is broken in Bolivia.

Morales and Garcia Linera will stay in Chimore in the central Department of Cochabamba to work with the people.  “We will come back and we will be millions as Tupac Amaru II said,” Morales declared.