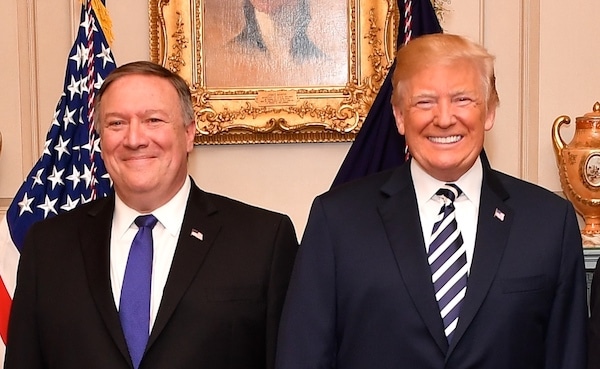 U.S. Secretary of State Mike Pompeo announced on Monday that the U.S. was softening its position on Israel’s network of settlements in the occupied Palestinain territory, saying it was revoking the notion that settlements are illegal under international law—a notion recognized by the rest of the world as factual and true.

“The Trump administration is reversing the Obama administration’s approach to Israeli settlements,” Pompeo said in his opening remarks at a press conference in Washington, D.C.

Pompeo said that the Trump administration would be departing from the Carter administration’s 1978 legal opinion—which served as the basis for the long-standing U.S. policy on settlements—which states that Israel’s establishment of Jewish-only settlements was “inconsistent with international law.”

“The hard truth is there will never be a judicial resolution to the conflict, and arguments about who is right and wrong as a matter of international law will not bring peace,” he said.

“The establishment of Israeli civilian settlements in the West Bank is not per se inconsistent with international law,” Pompeo declared, adding that the administration was “expressing no view on the legal status of any individual settlement.”

According to Pompeo, one of the considerations taken by the administration leading up to the decision were the “confirmed the legality of certain settlement activities” by the Israeli legal system—a system that has been widely criticized as serving to uphold the structures of Israel’s occupation rather than one aimed at achieving justice and equality for all.

He went on to say that this decision was not meant to be a judgement on the status of the West Bank or Israeli sovereignty in the territory. “This is for the Israelis and the Palestinians to negotiate.”

“The United States remains deeply committed to helping facilitate peace, and I will do everything I can to help this cause. The United States encourages the Israelis and the Palestinians to resolve the status of Israeli settlements in the West Bank in any final status negotiations,” he concluded.

Outrage in Palestine, celebration in Israel

Monday’s announcement was the latest in a series of efforts by the Trump administration—declaring occupied Jerusalem as the capital of Israel, recognizing Israeli sovereignty in the Golan Heights, and the movement of the U.S. embassy to Jeruaslem—aimed at weaking Palestinian claims of statehood.

“The announcement marks a continuation of the Trump Administration’s efforts to undermine years of progress on refining parameters for an agreed-upon resolution of the core issues of the conflict,” Israeli settlement watchdog Peace Now said in a statement.

The group called the announcement “an Orwellian absurdity,” saying “no declaration will change the fact that the settlements were built on occupied territory, in contravention of international law, and that they pose among the greatest obstacles to peace.”

The European Union released a statement immediately after Pompeo’s remarks, saying “all settlement activity is illegal under international law and it erodes the viability of the two-state solution and the prospects for a lasting peace.”

The statement went on to call on Israel to cease all settlement activity “in line with its obligations as an occupying power.”

PLO Executive committee member Hanan Ashrawi called the policy change “outrageous and horrific” in a statement, and reaffirmed the widely held position that settlements are a “grave violation of international law.”

“In sum, Israel’s colonial-settlement enterprise perpetuates the negation of the Palestinian right to self-determination,” he said.

Nabil Abu Rdeineh, spokesman for Palestinian President Mahmoud Abbas, said “the U.S. administration has lost its credibility to play any future role in the peace process.”

Meanwhile, Israel and its supporters welcomed the decision. According to Israeli Prime Minister Benjamin Netanyahu, he spoke to Trump on the phone after the announcement to thank him for “correcting a historical injustice.”

I spoke on the phone with U.S. President Donald Trump and told him that he had corrected a historic injustice

Somebody needed to say a simple truth, and President Trump did this, just as he did with the recognition of the Golan Heights and the moving of the U.S. embassy to Jerusalem

“I said to President Trump that we are not in a foreign land. This is our homeland for over 3,000 years. The reason that we are called “Jews” is because we came from here, from Judea,” he continued, referring to the Hebrew name for the West Bank.

Israeli Minister of Foreign Affairs Israel Katz also took to Twitter to celebrate the decision, saying “there’s no dispute about the right of the Jewish people to the Land of Israel.”

I welcome @SecPompeo & the Trump admin’s announcement on legality of communities in Judaea & Samaria. There’s no dispute about the right of the Jewish people to the Land of Israel. This is an appropriate response to the European Court decision & the boycott attempt against Israel

Nail in the coffin of two-state solution

The policy reversal comes at a pivotal time in regional politics, as Netanyahu, an ardent supporter of the settlements and annexation, struggles to hold onto power, and the Palestinian Authority continues to suffer financial and political blows at the hands of the U.S. and its allies.

Michael Lynk, Canadian law professor and UN human rights expert, told Mondoweiss that by legitimizing Israeli settlements, that U.S. has put the “very last nail in the coffin of the two state solution.”

Lynk emphasized the fact that “the illegality of the Israeli settlements has been accepted by virtually every country in the world,” and by departing with this consensus, the U.S. is legitimizing “the significant human rights and humanitarian violations perpetuated by the settlements.”

“This effectively grants permission to the Israeli government to formally annex large parts of the occupied West Bank. This will only confirm a one state reality characterized by a rigid two-tier system of legal and political rights, based on ethnicity and religion,” Lynk said. “This would meet the international definition of apartheid.”

Palestinian-American activist and human rights lawyer Noura Erekat expressed to Mondoweiss that she wasn’t particularly surprised by Pompeo’s announcement or what seems to be a sudden change in U.S. foreign policy.

“What Pompeo is announcing is not a rupture in U.S. foreign policy, but a culmination of it,” she said, adding that since 1967 the U.S. has “spoken out of both sides of its mouth.”

On the one hand, the U.S. has maintained, until now, that settlements are inconsistent with international law and counterproductive to the peace process, but “out of the other side of its mouth, the U.S. has provided Israel with unequivocal military, financial, and diplomatic aid in order to continue that settlement process,” Erekat said.

Erekat highlighted the fact that since the early 1990s until today, Israeli settlement expansion has increased by 200%.

“So this is the culmination of what every administration has done,” she told Mondoweiss. “The only difference is that Trump removed the Emperor’s clothes.”