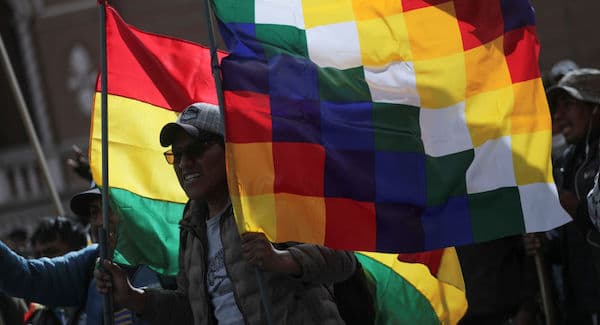 The Bolivian security forces set up road blocks across Cochabamba today as mass demonstrations are taking place against the brutal attacks carried out against the people last week.

Three marches have entered the city of Cochabamba, as they chant for justice and the end of this de facto government that is led by the self-declared president Jeanine Anez.

Last Friday, the Bolivian security forces attacked a crowd of civilians in Cochabamba that were demonstrating in support of the deposed President Evo Morales. The attack would turn into a massacre as nine Indigenous people were killed at the hands of the security forces.

The Indigenous people in Cochabamba were protesting the recent coup that led to the overthrow of the democratically elected President Evo Morales by the right-wing opposition.

In response to this massacre, tens of thousands of Bolivians took to the streets of Cochabamba to denounce the killings and the new government that is led by the self-declared president Jeanine Anez.

According to one protester that was interview by teleSUR, “we want the resignation of the self-proclaimed president. We want justice for all our fallen colleagues. These have been murders. The police and the military are killing us as if we are animals! We want justice!”

Several marches from different points of Bolivia are converging on La Paz to demand the resignation of de facto president Janine Áñez in less than 48 hours, otherwise their movement will intensify, with greater blockades and strikes throughout the South American country, warned members of the contingents.

The contingents that arrived in La Paz, gathered in Murillo Square, also expressed their indignation at the burning of whipalas, the flag of the original peoples, and the repression exercised by the security forces in various parts of the country that has left more than 20 dead and hundreds injured.

Although the central point is the resignation of Senator Ánez, self-proclaimed president without the endorsement of the National Assembly, the protests of peasant and indigenous sectors extend to an end to the repression of the police and army and reproach the local press for the lack of coverage of their movement.

The roadblocks caused by demonstrations in several regions have begun to generate a shortage of food and fuel in La Paz.

¨El the people are suffering a lot from the subjugation of this self-proclaimed president. We want Justice for our comrades, Justicia¨, say the organized communities during peaceful street demonstrations, which came from various Bolivian departments.

The mobilizations are reproduced not only in La Paz but in other cities such as El Alto, Cochabamba, Sabada, Sucre, among other localities.

Different participants in the demonstrations also asked the international community to pronounce against the de facto government, which took power on November 11, after the departure of constitutional president Evo Morales, who is in Mexico.

Another demand of the demonstrators asks for the resignation not only of Áñez, whom they accuse of murder, but of all the ministers appointed by the de facto government, but also the immediate return of President Evo Morales, who left the country to avoid a bloodbath.

The movement joins the request of six coca growers’ unions from the Chapare, in Cochabamba, who demanded on Saturday night “the resignation of the self-proclaimed” Áñez “within 48 hours” and asked the Legislative to approve a law “that guarantees national elections within 90 days”.

Agrarian unions express concern for the suffering of the people by so much repression endorsed by the self-governing president.

In El Alto, peasants march in demand for the cessation of violence and the return to peace, in addition to joining the call for the resignation of the de facto president.

On the other hand, three marches run through Cochabamba to demand the resignation of the de facto president and to repudiate the confrontations in Sacaba that left 12 people dead last Friday.

“Justice for the comrades who have died” is what demonstrators are asking for at this time in the city of Sacaba in the department of Cochabamba.

The blockades in Cochabamba, La Paz and Santa Cruz are maintained at 68 points on the main highways that connect these three departments, according to a report by the Bolivian Highway Administration (ABC).

Instead of pacification, they order defamation and repression against brothers in the countryside who denounce the coup d’état. After massacring 24 indigenous people, they now prepare a state of siege. It would be the confirmation that by asking for democracy they installed a dictatorship.

The Bolivian President in exile, Evo Morales, said on Monday that the de facto government established in his nation is preparing for a state of siege to contain the protests against the coup.

He also repudiated that the de facto government does not seek the pacification of the country and, instead, order the “defamation and repression” of those who demand respect for democracy.

When presenting his resignation, Morales asked the opposition to cease the violence generated against the indigenous people and followers of the Movement to Socialism (MAS), a government party. However, since then the persecution and aggressions against him have increased.

The marchistas reject the coup d’etat and the grievances against the natives committed by the coup plotters, such as the burning of the wiphala, ancestral flag of the original peoples.

A little more than a week after the coup d’etat was consummated, the demonstrations in Bolivia continue, while the performance of the military and police forces intensified.