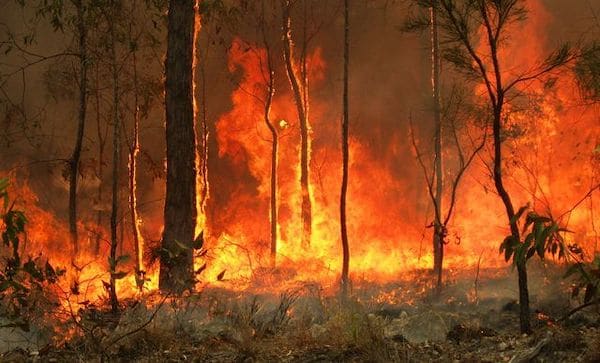 Even before summer has begun, bushfires and toxic smoke have threatened the lives, health and homes of millions of people in nearly every Australian state and territory this week. The fire emergencies that first erupted two weeks ago in two states have spread across the country, worsened by dust storms, asthma alerts and electricity blackouts.

By last night, the number of homes lost to bushfires this season in New South Wales (NSW) alone had reached 612 with crews continuing to battle 50 blazes across the state. Similar conditions, rated as “catastrophic” or “code red,” were experienced in South Australia, Victoria and Tasmania, as well as Western Australia and Queensland.

Fire authorities in every part of the continent are warning of a terrible summer ahead. There is no relief in sight for months from searing temperatures, a devastating drought and other climatic severities, including wild winds and dry lightning strikes.

Apocalyptic scenes of raging walls of flames, orange skies and acrid hazes forcing residents to wear face masks in major cities have also fuelled a political crisis. Both the Liberal-National Coalition government and the official Labor Party opposition have sought to shut down criticism and debate over the underlying impact of climate change and the inadequacy of firefighting resources.

After remaining silent for about a week, because he was jeered by fire victims, Prime Minister Scott Morrison yesterday attempted to respond to the public outrage, but only succeeded in making it worse. On Australian Broadcasting Corporation radio, he first declared that statements that official inaction on climate change had contributed to the fire season do not “bear up to credible scientific evidence.”

Second, Morrison said he had not met with 23 former fire and emergency services chiefs, who warned of the unprecedented conditions in April, because his government already had advice about the upcoming season. “This is why we put the additional resources into our emergency services and our aviation firefighting assets,” he said. “We were getting on with the job.”

Even by the government’s own data, Australia’s greenhouse emissions, overwhelmingly generated by large corporations, have continued to rise—up by 0.6 percent in the year to March. A host of scientific reports has demonstrated that global warming is worsening the fire dangers. While the link is complex, warmer weather increases the number of days each year on which there is high or extreme bushfire risk.

As for “getting on with the job,” the 23 former fire chiefs warned that twice as many large aircraft water bombers were needed. Firefighting budgets have been cut in several states in recent years and operations everywhere depend on over-stretched volunteers. Fire authorities have repeatedly warned residents that they cannot count on assistance in the event of sudden and unpredictable fires.

Adding to the discrediting of Morrison, mayors from 12 fire-affected regional areas called on the government to acknowledge the climate link and said all emergency services needed better funding for a longer fire season and increasingly severe disasters.

However, Labor has worked with the government to seek to suppress the fire debate. Labor leader Anthony Albanese has avoided any fire-related appearances or comments himself after being heckled by a victim. Labor’s Senate leader Penny Wong echoed him by calling for the immediate focus to be on firefighters and the victims, not the underlying issues.

Melbourne, Victoria’s capital, yesterday had its hottest November day for more than a century—reaching 40.9 degrees Centigrade and 44.3 degrees in suburban Laverton. About 60 fires broke out across the state and more than 80,000 households were cut off electricity in a total of 462 towns, after a network failure that also sparked a fire. Orange dust hit Melbourne and many towns, reducing visibility and potentially triggering respiratory problems, along with thunderstorms and high grass pollen levels.

Emergency Management Victoria raised the bushfire warning in northern parts of the state to Code Red. It was the first time a Code Red had been issued since the new rating was introduced in 2014, following the “Black Saturday” fires that killed 173 people in February 2009. Such warnings put the onus on residents to flee their homes before a fire strikes, rather than stay and try to defend their properties.

For three days, residents of Sydney, the NSW capital, have suffered acrid smoke that drifted from nearby fires, among the 50 burning throughout the state. The city’s air quality index hit 2,000 on Tuesday—anything above 200 is considered hazardous—and the haze was not expected to clear until today. People with breathing difficulties were advised to stay indoors, avoid exercise and use reliever medicine if appropriate.

In the northern state of Queensland, 63 uncontained fires were still burning and the number of homes destroyed over the past two weeks rose to 20. Fire authorities said only 80 fire trucks remained on the front lines. Exhausted volunteers were rested in the expectation that more extreme conditions would soon return.

Several fires broke out in the southern island state of Tasmania, driven by some record high temperatures and wind gusts of up to 100 kilometres per hour.

“Tasmanians should expect more days of extreme fire danger this bushfire season which is why every household in a bushfire-prone area needs to have a survival plan,” Tasmanian Fire Service controller Bruce Byatt said.

South Australia’s two-day fire emergency eased yesterday, but 40 of the 60 blazes continue. A fire that threatened communities near Yorketown on the state’s Yorke Peninsula had been sparked by a network power fault, local authorities revealed on Thursday.

At the height of the emergency, the Yorke Peninsula mayor, Darren Braund, said many residents had taken shelter overnight in the Edithburgh Town Hall but had been told to leave. “People are very worried, a lot of anxious people, hoping their properties are OK,” Braund said. His comments reflected the trauma suffered by many people around Australia.

As with the fires that have killed more than 80 people and forced mass evacuations in California over the past two years, Australia’s worsening bushfire crisis underscores the failure of the profit-driven capitalist system to address the root causes, and to allocate the resources necessary to protect people from the increasingly catastrophic consequences.