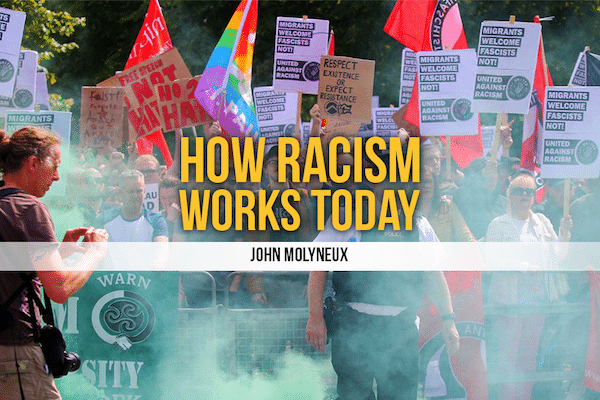 Understanding racist discourse will help us fight it. The first thing to note is that virtually everybody, including those who actively promote and trade on racial hatred—like Donald Trump—denies being ‘a racist’. Of course, sometimes they are simply deliberately lying but there is more than just that involved. There is also the fact that racist ideology has changed significantly over time and that contemporary racism is, in some ways, very different from racism in the past. Today’s racists often try to exploit this by talking as if only the older version of racism really counted.

Racism as it developed from the 16th century onwards through to the late 19th and early 20th century was a product and reflection of slavery and colonialism. It preached the inherent superiority of ‘the white race’ and the inherent inferiority of people of colour, with Black people (of African descent) at the bottom of the hierarchy and Asian and Middle Eastern people somewhere in between. Racists of this kind believed that White people had an innate right, a duty even, to rule people of colour (‘natives’), to conquer and subdue them ‘for their own good’ and to lead the world. Many such racists argued and believed that this doctrine of white supremacy had a scientific basis. Moreover, this belief in white superiority, though it had its honourable opponents, was part of the official dominant ideology in Europe and its offshoots round the world (U.S., Australia etc.). For example, Abraham Lincoln stated unequivocally:

In 1895 British Colonial Secretary, Joseph Chamberlain said, “I believe the British race is the greatest of governing races the world has ever seen” and Cecil Rhodes proclaimed that “it came to me in that fine exhilarating air [of the South African veld] that the British were the best race to rule the world”.

In the racism of today, however, this narrative of white superiority has largely been overtaken by a narrative of white victimhood. The problem now, according to the racists, is that ‘we’—and this ‘we’ can be Irish, English, American, French or whoever—are being done down and disadvantaged by ‘the immigrants’, the ‘foreigners’ or whoever. This does not mean that the old racism has entirely disappeared, far from it. It remains as a substratum underlying and underpinning the new racism. It is important, for example, in determining which immigrants and foreigners are claimed to be coming over here, taking our jobs and sponging off our welfare i.e. Africans and Muslims, not Americans and Australians, and in the idea that these migrants [refugees, asylum seekers etc.] will bring crime and molest ‘our’ women. But the racism of inherent white superiority is seldom articulated openly by mainstream or even far right politicians and is deemed unacceptable in official discourse.

This shift in the racist narrative has a material basis. It reflects the fact that while the racialised hierarchy of nations established by capitalism, slavery and colonialism is very much still in place, direct colonial rule has largely disappeared, but there has developed since the Second World War a significant presence in Europe, North America etc. of immigrants from the Global South. Hence the main purpose of racism—for the system—has changed from justifying imperial conquest and rule to scapegoating and divide and rule within the imperial countries. For this, the narrative of victimhood works better than the narrative of superiority.

Another historical factor in the changed shape of racism is the huge historical and ideological defeats inflicted on the old style racism in the course of the last century. These include the defeat of the Nazis and the exposure of the Holocaust; the victory of anti-colonial struggles from India and Vietnam to Cuba, Kenya, Ghana and many other places; the great Civil Rights struggle and the Black movement in the US and the defeat of Apartheid in South Africa. The best known leaders of these struggles became heroic global icons—Gandhi, Martin Luther King, Malcolm X, Nelson Mandela—and the old essentialist racism was profoundly discredited. It became, for most people, the hate that dare not speak its name.

Of course there is still a need to justify periodic wars which, wherever possible, are presented as ‘humanitarian interventions’ and to this end we have had, since the 1980s, the ratcheting up of Islamophobia, which also doubles up neatly for spreading fear and division on the domestic front.

Hence the vehement denials of racism by people who have just engaged in blatant racist dog whistles. So long—they claim—as they have not engaged in racism of the earlier variety i.e. proclaimed the innate inferiority of people of colour or used the most obvious hate words (I shall come back to question of hate speech shortly) they are not being ‘racist’, no matter how they have been pointing their fingers, sowing division, targeting groups or fostering suspicion and hate.

Hence also the persistent claim by perpetrators that they are not being racist because the category of people they are attacking are ‘not a race’ as in ‘I am not being racist attacking Muslims because Islam is a religion not a race’ or ‘I’m not racist when I have a go at Travellers because Travellers are Irish’ (or is it white). Behind this lurks the idea that it is racist to be anti-Negro or anti-Jewish because Negroes and Jews ARE races (a completely false notion in biological or scientific terms) but not racist to target Poles, Albanians or Romanians. But this only excuses the perpetrator if we operate with the older conception of racism. Muslims, Poles, Albanians, Romanians and, of course, Travellers and Roma are precisely among the main targets of contemporary racism.

As we have seen recently in Ireland with Fine Gael candidate, Verona Murphy and Fianna Fáil Senator Lorraine Clifford-Lee and others, the reaction of would-be establishment politicians who get caught out in overtly racist comments, the use of the ‘n-word’, the ‘k-word etc.’ is often to apologise (especially if they get told to by their party leader). Apart from the fact that they only ever apologise after they have been called out, it is noticeable that the standard form of the apology is to deny any racist intent and apologise ‘for any offence caused’. This has a double effect. First it trivialises the racism. The problem with racism is not just that it causes ‘offence’, it is that racism, by dehumanising the victim, justifies and incites the worst inhumanity. It justified slavery, it justified imperialism, it justified the holocaust and now it is used to justify letting refugees and migrants die in the Mediterranean. [We should remember that ALL the Fine Gael MEPS voted against rescue operations in the Mediterranean]. Racism is not a question of manners, it is a question of oppression and hate speech encourages that oppression.

The second effect is that it begins to shift the narrative towards seeing the perpetrator of the racist speech as the victim—the victim of liberal political correctness. Leo Varadkar’s defence of Verona Murphy is telling here. He said, “Verona is a very outspoken, a very independent person. She’s not going to be the kind of person who toes the party line”. Thus when Murphy invokes the crudest Islamophobic stereotype and weaponises it against vulnerable asylum seekers in a way that justifies their inhumane incarceration and deportation she is being “outspoken” and “independent”, with the subtext that it is just those woolly liberal Dublin 4 elite types who have it in for her.

And this is exactly how the far right racists, from Tommy Robinson to Gemma O’Doherty, present themselves. These arch bullies who wish to hound, humiliate, incarcerate and deport the most vulnerable and oppressed people on this island like to see themselves as the hard done by victims being deprived of their freedom of speech.

It is back again to the narrative of victimhood that is so central to contemporary racism. The point here is that people, not the Peter Casey’s, Noel Grealish’s or Gemma O’Doherty’s, but the people to whom they address this narrative ARE victims. They are victims of the banks, the giant corporations, the landlords, the developers, the government, the state bureaucracy and so on. The function of the racist narrative is to trade on that feeling of victimisation, give voice to it, but direct it onto ‘the outsiders’. And the media, even when they appear to be being critical, are subtly complicit in this agenda by amplifying it. As Malcolm X once said,

What is to be done

Certain conclusions follow from this understanding of the nature of current racism for the struggle against it.

1. Racism must be called out and denounced and where necessary actively mobilised against. This is vital. Racism must not be allowed to become normalised or acceptable. But it is not enough just to condemn it as if it were self-evidently wrong. Precisely because it presents itself as a narrative of victimhood it is not always easy for people to see why it is wrong. In condemning it liberal humanitarianism is insufficient, we also have to expose it as a weapon of divide and rule and diversion of justified anger on to false targets. The mainstream media cannot do this because it needs a strong critique of the government and the system that they are institutionally forbidden to make. It requires a radical and left voice.

2. It is necessary to drive a wedge between the racist and fascist far right and the rest of the political spectrum. At the moment they are small and marginalised. They should be kept so. We also have to drive a wedge between the political purveyors of racist poison (the Noel Grealish’s) and the ordinary people who may at times be susceptible to that poison. It is particularly important in a situation like Oughterard or Rooskey that the left doesn’t simply lump everyone together, treating all the local population as one reactionary racist mass. Our aim is to turn the decent majority against both the hard racist minority and the cynical political operators.

3. To achieve this aim socialists have to be the best campaigners on the real issues affecting the mass of people—health, wages, services, unfair taxes and, crucially at the moment, housing. Insofar as socialists gain credibility as the best fighters on these issues they will also have a better chance of being listened to when it comes to debates about racism and drawing the mass of people into active struggle is the best way to isolate the racists. But it has to be stressed that such struggle has to be accompanied by ant-racist campaigning and is not an excuse for ducking the question of racism. There is no guarantee, as we have seen over the water charges, that a housing campaigner or anti-government activist will also be anti-racist. Moreover, it is important that in any campaign over health, housing or climate change or whatever, the anti-racist message should be heard and taken on board within the movement.

Such a three pronged radical strategy is necessary to defeat the narrative of victimhood that characterises contemporary racism. Simple liberal humanitarianism and pleas for tolerance will not be enough.