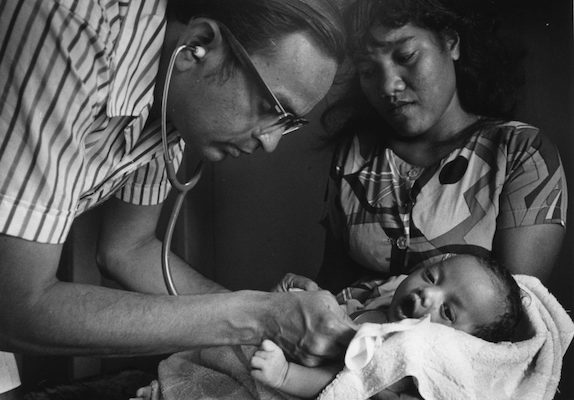 A medical team conducting annual medical examinations of Marshallese people who were exposed to radioactive fallout from an atmospheric nuclear weapons test in 1954. Credit: US Dept. of Energy.

The nuclear weapons world is full of subtle and not-so-subtle misogyny, and I’ve had my share of experiences: Fighting my way onto an otherwise all-male panel, only to have my speaking time cut short. Meeting a male colleague at a conference for the first time, where he immediately told me that he liked the red dress I was wearing in my Facebook profile photo and that I should dress like that more. Having a male superior tell me he saw no problem with the all-male, all-white panel he was organizing and scoffing at the idea that we had a “gender problem.”

It would be easy to dwell in frustration on experiences like these, or similar ones I have seen my colleagues face. Instead, I’m inspired by the women who excel in this field despite these challenges. What’s more, I’m glad that these experiences led me to start poking holes in the received nuclear weapons wisdom and to seek new approaches. One such approach, which is often overlooked but increasingly gaining prominence, is to examine nuclear issues through a social justice lens. As with many social justice issues, women, indigenous communities, communities of color, and low-income and rural communities have often been those hit hardest by nuclear weapons production and testing.

The scope of suffering among these frontline communities—those directly impacted by U.S. nuclear weapons production and testing—is shocking. A recent study very roughly estimates that atmospheric nuclear testing led to 340,000 to 460,000 premature deaths between 1951 and 1973. The U.S. government has estimated that roughly 200,000 armed service personnel were involved in nuclear weapons tests, though others put that number as high as 400,000. The 67 nuclear tests conducted in the Marshall Islands, in total, had the equivalent power of 1.6 Hiroshima bombs exploded every single day for 12 years.

Through all of this, women have been and are still being harmed in unique ways. Women exposed to radioactive fallout have much higher risks of miscarriage, stillbirth, and birth defects in their children. In the most exposed areas of the Marshall Islands, it became common for women to give birth to “jellyfish babies”—babies born without bones and with transparent skin. Breast cancer rates in the Marshall Islands are also shockingly high, yet there is a severe lack of cancer care available to the Marshallese. In the United States, breast-feeding mothers exposed to atmospheric nuclear testing passed Iodine-131 to their children through their breast milk. A recent study from the University of New Mexico showed that in the Navajo Nation, 26 percent of women have “concentrations of uranium exceeding levels found in the highest 5 percent of the U.S. population.” In Japan, women who survived the nuclear bombings in Hiroshima and Nagasaki, in addition to bearing the burden of physical health effects, were stigmatized and shunned, unable to marry because of the fear of radiation-caused illnesses and defects passing down to future generations. And overall, though the reasons are not fully understood, women at all ages are more vulnerable to ionizing radiation and seem more likely to get cancer from radiation exposure, and die, than men.

Gender matters when it comes to the physical effects of nuclear weapons, but also the way we do and don’t talk about them. In a recent study on women in national security, I was stunned to read that “the consideration of differential group effects is often dismissed by policymakers who do not consider civilian impacts to be important or useful.” Reading that I had to ask: not “important or useful” for whom? Perhaps they’re not important to policymakers, though I find that incredibly cynical. But surely they’re important to the people suffering and dying from these effects.

In her classic “Sex and Death in the Rational World of Defense Intellectuals,” Carol Cohn describes the ways that discussion of nuclear weapons is informed by and perpetuates toxic gender norms. In this world, strength, force, rationality, and destruction are masculine. Things like weapon design, targeting, and nuclear strategy fall into this category. Weakness, emotion, the very concept of peace, and the human costs of nuclear weapons are feminine. She found that the reality of human death was not even a part of the language that policymakers use when discussing nuclear weapons—it’s been scrubbed out. If you feel conflicted discussing war plans involving nuclear weapons that could kill tens of millions, you’re a “wimp.” Maybe you don’t have the “stones” for war.

The arms control community has largely bought into this mindset. At a recent meeting about how we might reach new audiences, a woman suggested using more emotion and storytelling in our work. Someone else quickly responded that this was not what our work was about, that we didn’t have time to dwell on emotions. I think sticking to strategy, budgets, and warhead and missile design feels safer and more acceptable to this male-dominated field.

Because of this, I often feel as if I must work twice as hard to prove my credibility and make my voice heard. Not only am I a woman—already a strike against me—I also want to talk about the human impacts of nuclear weapons, apparently an emotional and irrelevant topic. At a recent nine-day conference for aspiring nuclear professionals, I attended 33 lectures on everything from stockpile stewardship to Russia’s nuclear doctrine to ballistic missile defense. There were no lectures on the human costs of nuclear weapons; it was barely mentioned.

It is long past time for the nuclear nonproliferation and arms control community to work with these affected communities and center them in our advocacy. The arms control community is small, but it has resources, access, and in many cases the labels of “expertise” and “credibility.” The communities affected by nuclear weapons creation and testing have in many cases been denied all of these things as part of a larger history of marginalization. When the traditional arms control community also denies them credibility and access, sidelines their stories, and does not support their goals, we are perpetuating the systems of oppression that caused them to be harmed in the first place. People in these communities are dying today, and we are ignoring it.

This is the motivation behind my new project, “Sharing the Stage with Nuclear Frontline Communities,” funded by the Ploughshares Fund Women’s Initiative. My project works to put the voices of these communities front and center, share the work of local leaders and experts, and help find opportunities for collaboration with those in the more traditional arms control and nonproliferation sphere.

As a first step, I will create a database of leaders and experts that are interested in partnering with those in the arms control and nonproliferation world. Ultimately, I hope to find opportunities for genuine, mutually supportive collaboration. Could those with contacts in congressional offices help atomic veterans organize a lobby day to call for expanding compensation from the government? Could a community watchdog group share their expertise on the ins-and-outs of a nuclear lab and help inform the work of nuclear policy groups? Can the grassroots advocacy and storytelling happening in frontline communities be coordinated with policy work happening on the Hill in Washington, D.C.?

The database will also include entries for organizations in the nuclear policy and arms control world. Those interested can support the project by including an entry of their own. An even better way to get involved is to get in touch with frontline community members themselves for suggestions—as the ones directly impacted, they know best what kind of collaboration is most effective and helpful.

Over the years, nuclear weapons policy has been made largely without input from the people who actually have a first-hand understanding of the effects of these weapons: the communities harmed by nuclear weapons production and testing. Though there is much work to be done to right the wrongs these communities have endured, a good first step for those in the nuclear policy community is to embrace their perspectives and knowledge: listen to their stories, build relationships, and find ways to meaningfully work together.