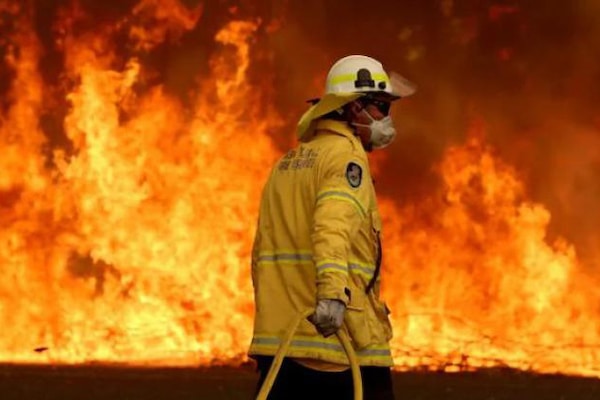 Bushfire crisis- welcome to life on a burning planet

The fires ravaging eastern Australia are visible from space. North-westerly winds carried their dust and smoke across to New Zealand, bombarding the South Island. The sky is orange above Port Macquarie on the north coast of New South Wales, where the fires are worst. An area larger than one million football fields has already burned to ash. The chain of infernos stretches from Rockhampton in northern Queensland to the bush south of Wollongong. For the first time in history, Sydney’s fire danger forecast was made “catastrophic” for 12 November. All before summer has started.

“We are in uncharted territory”, Rural Fire Service commissioner Shane Fitzsimmons told the ABC. “We have never seen this many fires concurrently at emergency warning level.” Three people are confirmed dead, hundreds of homes are destroyed, and the death toll is expected to rise. “It was like the apocalypse”, one north coast local told the ABC. “Every second house is gone … The village is gone … I guarantee, most of Nymboida will be displaced because they’re going to have nowhere to live.”

Bushfires on this scale are unprecedented, but they were foreseeable. Nine of Australia’s 10 hottest recorded years have occurred since 2005, according to the Bureau of Meteorology. And atmospheric changes are pushing cold fronts further south, reducing rainfall in NSW and southern Queensland. The Climate Council of Australia’s 2015 report, The burning issue, outlined that global temperature rises are causing longer fire seasons and hotter fires. “Globally, the length of the fire weather season increased by nearly 19 percent between 1979 and 2013. Longer fire seasons will reduce opportunities for controlled burning and increase pressure on firefighting resources”, the report noted.

Like criminals with guilty consciences, politicians are lashing out at anyone who joins the dots – or just reads the science. “I thought it was inappropriate that people were trying to talk about climate change yesterday when people wanted to stay alive”, NSW Liberal premier Gladys Berejiklian told the Seven Network on 11 November. Deputy prime minister and Nationals leader Michael McCormack called them “the ravings of woke capital-city greenies”.

Yet those fighting for survival live far from the safety of the cities. Terri Nicholson was forced to evacuate her property near Nightcap National Park, in the Northern Rivers region of New South Wales. Her house served as headquarters of a blockade in the 1970s to protect the area from deforestation. “I don’t even have the words right now. It’s just gobsmacking and distressing to witness”, she told the Guardian. “[My parents] hosted the site of the Terania protest to defend this great rainforest from logging and now we’re here defending it due to the effects of climate change.”

Parched ground, wind and heat are essential ingredients of wild bushfires. And NSW is bone dry. Rural towns such as Walgett have almost no running water. The die-offs of millions of fish at Menindee Lakes highlighted the epic scale of mismanagement of the eastern states’ most important water systems. Governments have sold water for next to nothing to agricultural capitalists, who have siphoned off 70 gigalitres to grow water-intensive crops such as cotton. The water never makes it downstream, and the Murray-Darling basin is now at 9 percent capacity. Not only does drought create a tinderbox in national parks and bush land, but firefighters have had to drill bores to find water they can use to control the current blaze.

NSW fire services are completely ill equipped to put out, or even control, the fires. Of the 79,000 firefighters in the state, only 6,500 are professionals. Why is one of Australia’s perennial threats fought with an army of volunteers? Why does Australia borrow its most important equipment from the United States? Longer fire seasons are overlapping, and necessary aircraft are now busy trying to extinguish the third wildfire outbreak in California since 2017. Where is the preventive strategy of back burning and environmental management so that fires cannot get out of control in the first place? National parks staff have been stripped to the bone when we need more people than ever working to minimise undergrowth and encourage orderly regeneration.

And most importantly, what is the government doing to limit global temperature rises, so that calamities like this do not become more common or more ferocious? They are doing nothing. Infinitely worse than nothing. Alongside a full-throttle expansion of coal and natural gas, there are moves at every level of government to outlaw climate activism. Scott Morrison has pledged to crack down on boycotts of environmentally destructive industries. “We are working to identify mechanisms that can successfully outlaw these indulgent and selfish practices that threaten the livelihoods of fellow Australians”, the prime minister told the Queensland Resources Council on 1 November.

They don’t care about the fires. They don’t care about the homes or the wildlife or the firefighters or the dead. They want to burn everything getting in the way of profit and power. Whatever else goes with it is fine by them. A scorched earth for a pocket of gold. We need a political movement bigger and more radical than anything Australia has ever seen. The capitalist system promises more fires, and worse ones. Time to burn it down before it burns us up.