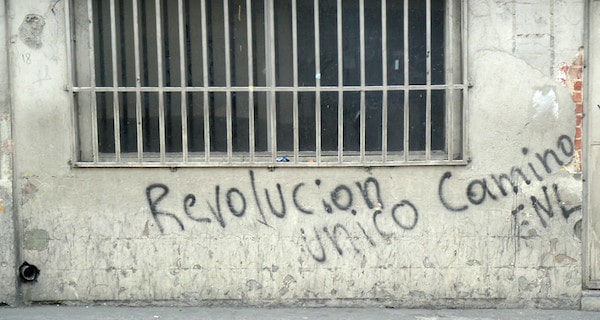 ENL may mean National Liberation Army: an acronym not associated with the Guatemalan civil war. It may be a reference to revolutionary forces associated with Bolivia, Columbia or Peru

Legalienate editors Frank Scott and Michael Smith, who declared themselves co-president of the United States in February, today hailed the self-proclaimed presidency of Jeanine Añez in Bolivia as a harbinger of democratic self-determination throughout the world.

“Juan Guaidó in Venezuela was just the beginning,” exulted Smith.

On the eve of Thanksgiving, we are deeply grateful to have yet another self-proclaimed president, especially in Bolivia, which suffered the indignity of majority rule for 13 long years, and couldn’t have been expected to take it much longer.

“Their long national nightmare is over,” added Scott, who observed that Morales’s “insane socialism” had sent the country careening disastrously into sustained high economic growth, increased literacy, and sharp reductions in poverty and inequality before rich white Christians restored the natural order of looting and burning homes, teargassing funerals, and firing machine guns into unarmed crowds.

Añez’s democratic legitimacy is beyond dispute, as her voter support soared to nearly two percent in the October elections, while her Democratic Unity Party did even better, claiming a massive 4.24% of the vote. The deposed and disgraced Evo Morales could only garner a meager 47%, just ten percent more than his nearest rival. Fortunately, the Organization of American States cried fraud, so the top vote-getter could properly be declared the loser, an increasingly common electoral standard famously celebrated by the United States in 2000 and 2016, though with a much wider margin this time.

Unexpected condolence calls from Al Gore and Hillary Clinton coached Morales on the art of showing grace under pressure. “Just bend over and take it,” said Gore, summarizing wisdom learned from his 2000 campaign. “It worked wonders for me.”

“Blame everyone but yourself,” recommended HRC, who revealed that, though widely detested, she is thinking of running for president on a third party ticket if Bernie Sanders wins the democratic nomination in the United States. “The challenge of our time,” said Clinton, “is to prevent a raving lunatic from destroying our democracy.” She added that she opposes Donald Trump, too.

President Añez, her smooth diplomatic skills already on display, announced from La Paz that “our power is God,” and humbly entered the Bolivian presidential palace toting a huge Bible while tweeting subtly that Bolivian Indian rites were “satanic.” Fortunately, Indians only make up a large majority of the population, so no repercussions can be expected.

Many experts object to describing Añez’s ascension to the presidency as a coup, insisting that Morales voluntarily resigned his post. Williams Kaliman, head of the Bolivian Armed Forces when Morales quit, insists that he merely suggested the former president step down, either before or after police finished ransacking his house. Kaliman, a graduate of the United States School of the Americas at Fort Benning, famous for democratic practices like mass torture, rape, and murder, said he had “no idea” how people got the idea that force was involved. “I left the matter entirely up to Morales,” he said, describing the atmosphere in which the decision was made as “completely calm,” except for the unrestrained arson, assault, and looting by democracy-loving police officers.

There is no truth to vulgar Marxist claims that the change in Bolivia’s government was motivated by a U.S. desire to gain control of the country’s lithium, (70% of the world supply), a crucial metal needed for mass production of electric car batteries. Such conspiracy theories are based on the long discredited notion that private profit has something to do with a market economy dedicated to maximizing private gain.

Michael K. Smith is the author of The Madness of King George from Common Courage Press. He co-blogs with Frank Scott at www.legalienate.blogspot.com. Read other articles by Michael.