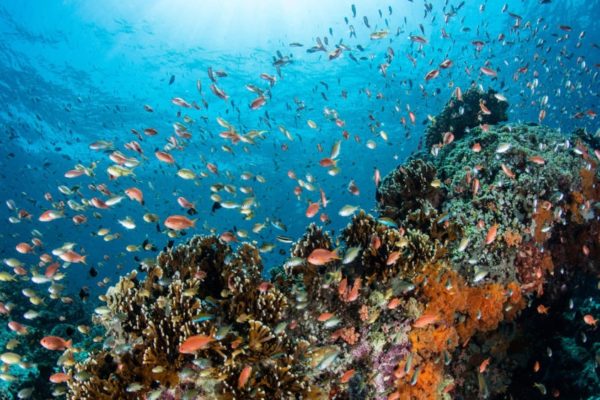 A great extinction is under way across most of the planet. From the forests of the Amazon to the suburban hinterlands of America, from the depths of the oceans to Southeast Asia’s mangrove swamps, millions of species are being lost. And as species disappear, the populations of those that remain are also plunging. North America has lost more than a quarter of its birds since 1970.

And yet the situation is more complex than at first sight. Many local ecosystems—at least as measured by “species richness,” the number of species they contain—appear to be in good health. The most comprehensive count ever attempted of species numbers in local ecosystems last month came up with two unexpected and controversial results.

First, its analysis of data from some 50,000 sites on land and in the oceans found no evidence of a general decline in the number of species living in individual ecosystems. Local “species richness” is holding up, as some places lose species while just as many gain them, the study showed. And second, species are coming and going from those study sites at a rate never previously imagined. On average, study sites swapped a staggering 28 percent of their species every decade, with many having an even higher turnover.

“Biodiversity is changing everywhere, but we are not losing biodiversity everywhere. Some places are recovering and adapting,” says Maria Dornelas of the University of St Andrews, one of 23 authors of the international study, published in Science. “Our work does not contradict the extinction crisis,” she insists. “But it shows that what happens at one scale is not necessarily reflected at another.” There are, she concludes, “winners as well as losers in the Anthropocene.”

the global biodiversity crisis, at least for now, is not primarily about decline but, rather, about large-scale reorganization.

Some ecologists question the reliability of the findings—given that most of the data come from still-functioning ecosystems rather than urban areas and farmland where most species have been lost. Others fear they could be used to deny the mass extinction.

But most spoken to for this article accepted the findings, while fearing that in the “large-scale reorganization,” most of the losers are rare, endangered, and endemic species, while most of the winners are common, generalist, and invasive species—rats, mosquitoes, water hyacinth and the like. That would explain the central conundrum raised by the findings—that species numbers remain high locally, while collapsing globally. The generalists are taking over—a process the authors of the paper call “homogenization.”

A debate has been brewing among ecologists for a while about the real state of biodiversity at different spatial scales. It is more than two decades since researchers first pointed out that the dramatic global loss of species did not seem to be reflected in some local ecosystems, many of which have more species than in the past. Such places range in size from small oceanic islands to North America, which has many more plant species since the arrival of Europeans. 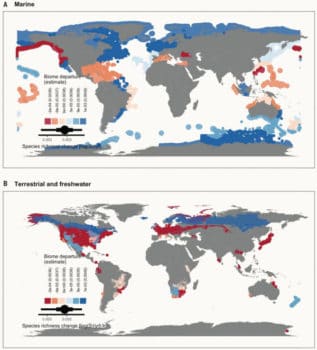 Researchers have sought to determine whether such places are outliers or typical. And they have debated whether species richness—the number of species in a given locality—is a useful measure of biodiversity. It implies that alien invaders have equal value to native species, when that may be far from the case.

The latest analysis, led by Shane Blowes of the German Center for Integrative Biodiversity Research in Leipzig, uses a database called BioTIME, hosted at St Andrews University, to review 239 studies that have recorded the number of species through time at around 50,000 places in most of the world’s ecosystems.

Many of the biggest changes turn out to have been in marine ecosystems, especially in the tropics, where in some places species composition changed by as much as 20 percent in a single year. Blowes told Yale Environment 360 that two of the biggest turnover hotspots are in the western tropical Atlantic and off the coast of northwest Australia.

It seems likely that the rapid local species turnover is new—probably a result of human activity such as chopping down forests, draining marshes, concreting prairies, damming rivers, and changing climate. But that is not self-evident, says Mark Vellend, of the University of Sherbrooke in Quebec, a co-author of the new study. “The most pristine ecosystems have always changed in composition over time,” he says.

And while human activity clearly often damages local biodiversity, it can also, at certain times and places, drive local increases in species numbers—by creating new habitats, by changing existing ones, or by physically bringing in new species.

I have a study about to be submitted [for publication] using forest inventory data over hundreds of years that supports this.

Ornithologists have found the same counterintuitive local trend, he says. In Ontario, against a backdrop of a continent-wide decline in bird populations, the number of bird species in individual woodland areas increases with deforestation, because the open ground attracts new specialists. Only as deforestation approaches 50 percent of the study area do the numbers begin to decline. Whether those extra species are a good thing for the ecosystems they invade is, of course, another question.

The same can happen on mountains. Even as some cold-loving species disappear from summits, more species move in from below. In a study of over 300 mountain summits across Europe last year, Manuel Steinbauer, now at the University of Bayreuth, Germany, found a rising number of species, “with five times as much species enrichment between 2007 and 2016 as fifty years ago.”

Sometimes such trends mark recovery from past environmental damage. Britain, for instance, has seen a significant increase in species richness over the past 20 years in a network of closely monitored sites in upland moors, rivers, wetlands, and woods. The main cause, says Rob Rose of the Center for Ecology and Hydrology in Lancaster, is recovery from acid rain. But most researchers contacted for this article assess the biggest driver of more diverse local ecosystems as the import of non-native species by humans.

Many of the criticisms of the new findings are technical. Some ecologists argue that the database of local studies used in the analysis is not representative, ignoring places such as farms and cities where almost all biodiversity has been lost. 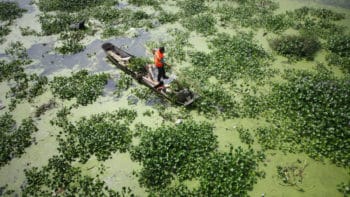 “There is no debate that biodiversity is increasing in some locations,” Bradley Cardinale of the University of Michigan, a leading critic, said. “The debate is about whether these trends represent the generality. I have argued that the datasets are not globally representative, because biologists don’t spend time monitoring habitats that have been destroyed… in corn fields, clear-cut forests, or urban habitats.” Such biases “preclude meaningful conclusions about local biodiversity change,” he and Andrew Gonzalez of McGill University, argued in a critique to an earlier study.

Vellend and Dornelas have hit back, saying the critiques themselves have “fundamental flaws.” But Cardinale says his opponents’ papers are

a poor example of how to do science. When a group of people become so tied to their ideas or datasets that they can’t step back to look at things in a different way, their publications become more about advancing ideology than testing hypotheses.

However, some of the protagonists are now finding common ground. Gonzalez has gone from critic to being a co-author on the new Blowes paper. “My position has shifted a little over the years,” he told Yale Environment 360. He now accepts the evidence of dramatic species turnover, and that localities losing species are broadly balanced by others gaining them. But he questions any conclusion that humans “cause gains and losses in equal measure. I am not comfortable with such attribution. We simply don’t know,” he said.

Some researchers fear that the findings of no loss in local biodiversity could lead to the mistaken impression that the global biodiversity crisis is a myth. “All of us can quickly imagine certain subsets of the public cherry-picking results and trumpeting, ‘scientists prove claimed modern mass extinction not occurring,’” Brian McGill of the University of Maine, a co-author of the Science  paper, wrote in a blog discussing some earlier findings back in 2014.

But the authors insist that the findings on local diversity are entirely consistent with the fact that globally species are disappearing fast. The paradox is explained by an ecological reorganization that is delivering a global homogenization of species. “I struggled with it myself,” says Dornelas. “But it makes sense.”

The question remains whether we should see rapid species turnover in perturbed ecosystems as signs of the good health and adaptability of those ecosystems or of stress that could lead to their eventual collapse. Here strong disagreements remain.

Georgina Mace of University College London, a leading ecologist not involved in the study, is fearful of what is emerging. The gains in species in many local ecosystems “are largely non-natives, so I think we should be very cautious in assuming it is just churn or adaptation,” she said. “We don’t know how these rapidly changing communities will fare over time.”

But Vellend is more optimistic. “I certainly don’t think one can conclude from our study that all is well with the biota of the world,” he said. “But my experience in plant communities is that rapid compositional changes are adaptive.” And Dornelas is of a similar mind. “We should stop thinking about biodiversity as if it were art in a museum,” she said. “It is not static. We need to embrace change in biodiversity as the rule, not the exception.”

Fred Pearce is a freelance author and journalist based in the U.K. He is a contributing writer for Yale Environment 360 and is the author of numerous books, including The Land Grabbers, Earth Then and Now: Amazing Images of Our Changing World, and The Climate Files: The Battle for the Truth About Global Warming.