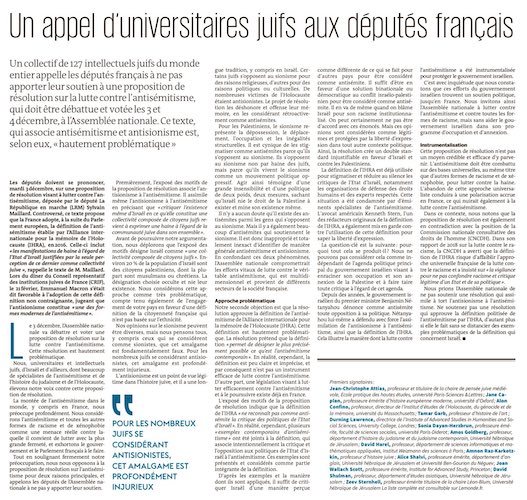 New Law Faced Critics Alleging it “Stigmatises and Silences ” Critics of Israel, and even those in Favour of 2 State Solution.

Anti-Zionism is a form of antisemitism, France’s National Assembly determined on Tuesday, voting on a resolution calling on the government to adopt the International Holocaust Remembrance Alliance’s definition of antisemitism.

France 24 reports on why the move met strong opposition.

A group of 127 Jewish intellectuals has signed a petition against a new French bill which would equate anti-Zionism with anti-Semitism. FRANCE 24 spoke with one of the signatories who calls the bill “problematic”, saying it “delegitimises the legitimate act of criticising the state of Israel”.

In an interview with FRANCE 24, James Cohen, a professor at the Université Sorbonne Nouvelle Paris 3 and one of the 127 signatories of the petition, said that “by equating antizionism with anti-Semitism, you’re broadening the definition of antisemitism too much […] you’re going very far afield.”

On Tuesday evening, French lawmakers adopted the bill, with 154 votes against 72.

The above declaration by Jewish intellectuals was printed in Le Monde yesterday.

More in the Nouvel Obs:

The resolution is “highly problematic,” says the group in its platform. First because it “equates […] anti-Zionism with anti-Semitism” . But “for many Jews considering themselves anti-Zionists, this conflation between the two is deeply offensive,” says the collective.

“Some Jews oppose Zionism for religious reasons, others for political or cultural reasons. Many Holocaust victims were anti-Zionists, “ says the collective.

“For Palestinians, Zionism represents dispossession, displacement, occupation and structural inequalities. […] They oppose Zionism not out of hatred of the Jews, but because they live Zionism as an oppressive political movement. “

The second reason is that IHRA’s definition of anti-Semitism itself would be “highly problematic” , “unclear and imprecise” .

It is, moreover, “already used to stigmatise and silence critics of the State of Israel, including human rights organizations,” said the group.

“We can not consider this as independent of the Israeli government’s main political agenda of rooting out its occupation and annexation of Palestine and silencing all criticism,” say the signatories, who are worried about “political support”. , to France “ .

According to the group, “anti-Semitism must be fought on a universal basis, along with other forms of racism and xenophobia, in the battle against hatred” .

The text was passed by a very narrow margin, in a virtually empty parliament. Opponent of the legislation have notably complained that the law associates anti-Zionism and anti-Semitism.

Opening the debate, ruling party MP Sylvain Maillard warned the National Assembly that “Jews are once again being killed in France, because they are Jews”.

During the parliamentary discussion, the deputies were informed that more than one hundred Jewish graves had been desecrated with black swastikas on Tuesday in the north-western French town of Westhoffen.

Finally, 154 MPs voted in favour of the legislation, with 72 against. Many parliamentarians chose to leave before the vote on the controversial law. There were 550 deputies present for the earlier vote on the social security budget.

Fewer than one third of ruling party members supported the new law, with 26 voting against, and 22 abstaining.

Critics of the law point to the association made by the new legislation between anti-Zionism and anti-Semitism.

French President Emmanuel Macron has already stated his belief that anti-Zionism represents “one of the current forms of anti-Semitism”.

The French law accepts the controversial definition of anti-Semitism proposed by the International Holocaust Remembrance Alliance (IHRA): “Antisemitism is a certain perception of Jews, which may be expressed as hatred toward Jews. Rhetorical and physical manifestations of antisemitism are directed toward Jewish or non-Jewish individuals and/or their property, toward Jewish community institutions and religious facilities.”

That definition makes no reference to anti-Zionism, but, the examples which accompany the definition explain that “any unfair treatment of the state of Israel, demanding behavior not expected or demanded of any other democratic nation” is regarded as unacceptable.

Supporters of the French law claim that many anti-Semites hide behind the banner of anti-Zionism. The Interior Minister, Christophe Castaner, explained that the law had only one objective and that was to remove all ambiguity about anti-Semitic statements, acts or gestures. Castaner further pointed out that the neither the word anti-Semitism nor the term anti-Zionism appear anywhere in the final text of the law.

Several dozen prominent Jewish intellectuals have actively campaigned against the law, saying it runs the risk of “criminalising ideas” without doing anything to fight racism.

The text was voted on by a very low number of deputies. At the heart of the criticism of opponents: the fact that it associates anti-Zionism with a form of anti-Semitism.

54 deputies voted for–out of the 577 who sit in the National Assembly–72 against. Many parliamentarians did not take part in the vote, even though they were nearly 550 present two hours earlier for the final adoption of the Social Security (Health and Family allowances) bill, a sign of the discomfort aroused by this text.

The LRM group, revealed by the analysis of the poll… of its 303 members, 84 voted in favor of the text, ie less than a third of the Macronist collective. 26 voted against when 22 abstained.