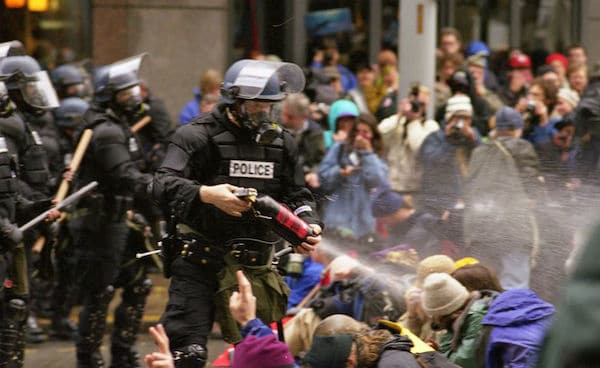 The anti-neoliberal spirit of the Seattle protests of two decades encapsulated an internationalist but anti-globalisation mass movement that has lessons for us today, argue Chris Nineham and Feyzi Ismail

Twenty years ago this week, the world shared a disorientating experience. Television footage flashed around the globe showing thousands of protestors clashing with riot police in Seattle, the heartland of dotcom capitalism. The demonstrators had gathered in Seattle to confront the World Trade Organisation (WTO), the most high-profile institution of globalised capitalism. The decade which started with the announcement of the end of history and the final victory of liberal democracy and the free market was ending with mass protests against capitalism in the world’s most powerful economy.

What happened in Seattle is worth remembering because its legacy continues to play out on the streets. The anti-globalisation movement sparked a new era of protest and resistance that continues today. It was partly inspired by a series of Latin American revolts against neoliberalism in the 1990s. Soon after Seattle there were insurgencies over water privatisation in Bolivia, debt restructuring in Argentina, and a popular uprising in defence of Chavez and his reforms in Venezuela.

The current turmoil in Chile, Colombia, Haiti, Bolivia and elsewhere is the latest phase in the continuing struggle for real change in Latin America. The fact that the huge protests there are mirrored by mass mobilisations across the Middle East and North Africa against inequality, unemployment and corrupt politicians shows the global scale of the anger that now exists against neoliberal capitalism.

Five days that shook the world

The Battle of Seattle was the moment when the working-class defeats of the 1970s and 1980s began to be overcome. It was a very political rebellion, bringing together campaigners against Third World debt, environmentalists and trade unionists in a movement against the aggressive western-controlled free trade rules of the WTO. With the help of a bourgeoning independent media, what began as a mass protest against the WTO and its vicious trade rules developed into a movement with a generalised critique of the system.

The initial 1994 WTO agreement had committed member states to expanding trade liberalisation and they agreed to organise a ministerial summit five years later. For countries of the Global South, WTO membership was a disaster. They were promised access to Western markets but only on trade terms set by the western-dominated World Bank and IMF.

Many of the representatives of countries of the Global South were left out of key WTO decisions. Discussions were held in closed-door meetings, mainly between the US, Canada, the EU and Japan. They would decide the rules governing participation, for example, where countries in the Global South still have to compete with the Global North when the latter can exercise high tariffs and subsidies protecting domestic industries. Developing countries representatives were deliberately side-lined, which meant that the working groups that had convened to reach consensus between countries were a sham.

Outside the trade talks, protesters began organising on the morning of 30 November by blockading major intersections to prevent delegates from getting to the conference venue. A series of demonstrations were scheduled to converge at key intersections, and different parts of the city were occupied with teach-ins, rallies, and street parties: the slogan was ‘Shut Down Seattle’. Many of the protesters had locked themselves down at intersections and chained themselves together, making it impossible for them to be moved off. The police moved in and attacked using pepper spray, tear gas, stun grenades, and eventually rubber bullets. But the heroic protests continued for five days.

The protesters succeeded on many fronts. They delayed the opening of the summit, overshadowed the talks and dominated the media coverage. The protests also pressured and delegitimated the global institutions themselves: the WTO, World Bank, IMF and the OECD all publicly agreed that more effort was needed to make the case that trade had to address the needs of the world’s poor.

Seattle was followed by huge protests at successive WTO and G8 gatherings, including the great demonstration at the G8 in Genoa in 2001. It wasn’t long before the masters of the universe had to start meeting up mountains and on remote islands to escape tens of thousands of protesters.

The protests also demonstrated features associated with growing political consciousness that endure today: they demonstrated high levels of popular concern over human rights, labour rights, environmental protection, poverty and unequal trade, and that the global institutions are to blame for many of these problems. More than that, the protests pointed to a growing consciousness of a contradiction between capitalism and democracy; the fact that so much power is held within these organisations that inherently limit popular control and democratic oversight over crucial economic, social and ecological policies that affect the majority.

The critique generalised to the system itself, with slogans like Another World is Possible and This Is What Democracy Looks Like were taken up by protestors around the world.  Even the Economist recognised the growing influence of the movement, noting that ‘The protesters are right that the most pressing moral, political and economic issue of our time is third-world poverty. And they are right that the tide of “globalisation”, powerful as the engines driving it may be, can be turned back. The fact that both these things are true is what makes the protesters–and, crucially, the strand of popular opinion that sympathises with them–so terribly dangerous.’

A new kind of protest

Seattle also encapsulated the re-emergence of mass protest movements on a new basis. While social movements and mass campaigns in the 1970s and 1980s had tended to come together around single issues, this movement self-defined as anti-neoliberal or even anti-capitalist: it was a movement that aimed to connect different issues and self-consciously challenged the system.

The movement’s growth was startling. Over 300,000 people demonstrated at the G8 protests in Genoa in 2001. The first World Social Forums, which brought activists from across the globe to Porto Alegre in Brazil, were attended by more than 150,000 people. More than 80,000 came to the European Social Forum in Florence in the winter of 2002. These social forums helped to launch the call for international protests against the Iraq War in 2003, which took place in 600 cities, involved tens of millions and were the biggest international protests the world has ever seen.

At the same time, the Iraq War created a crisis for the anti-globalisation movements. The more cautious elements amongst the NGOs, the political parties and the trade unions were nervous about opposing the West’s imperial wars. In the US, the movement cancelled some of its protests in the aftermath of the 9/11 attacks, fearing a backlash. But the movement also provided some of the impetus and activists for the great anti-war protests and helped to ensure its radicalism.

The spirit, radicalism and ambition of these great protest events re-emerged a few years after the banking crisis of 2008, when the revolutionary events in Egypt and Tunisia helped inspire not just the Occupy movement but massive anti-austerity protests in Greece, Spain, and a little later Britain, amongst others. These in turn provided the launchpad for new radical electoral parties and, in the British case, a real challenge to Blairism and the right in the Labour Party.

These experiments have not been an unqualified success, partly because they have often involved a retreat from mass participatory movements and a reassertion of the conventional idea that politics is what happens in parliaments. For many on the left, Syriza in particular failed to rise to the challenge of confronting the neoliberal order and ended in disillusionment.

But once again, we are in a moment where millions are taking to the streets to challenge neoliberal regimes. The anti-globalisation movement helped put protest back centre stage, revived the left, and confidently raised the issue of system change for millions of people, for the first time in decades. In doing so, it raised crucial questions that the left urgently needs to answer at a time of growing radicalisation around the world. How should the growing politicised minority draw in the wider population? How should mass movements relate to left electoral parties or even governments? Most fundamentally of all, how can we create movements with the social weight and the political confidence to pursue system change to the end?

The protests today reveal the fact that we are not living in a period of pure political reaction at a global level but one of intense polarisation, in which regime-shaking movements are an ever-present possibility. If that polarisation can be exploited, particularly in the context of climate breakdown, it will serve to clarify, sharpen and advance the system change we desperately need.