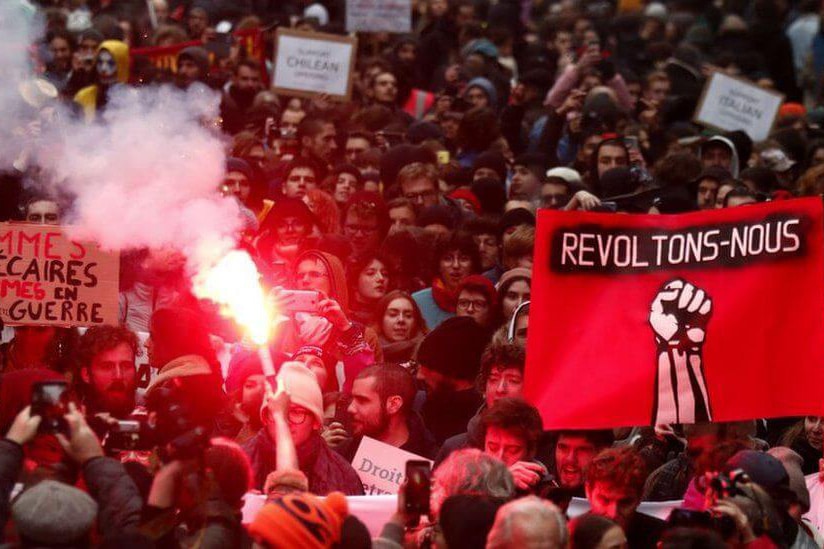 On December 10, the mass mobilization against pension cuts that has brought the French economy to a halt entered its sixth day, with over 500,000 taking to the streets in demonstrations across the country. Strikers shut down bus, subway, and train lines, while teachers struck schools, hospital workers took similar action, and even many museums had to close. Strikers also blockaded most of the country’s oil refineries. Half a million or more demonstrators took to the streets across France, in large cities as well as smaller towns. While this was a smaller turnout than the one million who hit the streets on the first day of mobilization, December 5, the economic effects were about the same. Major sectors of the economy were already feeling the pinch by December 10, adding pressure on the increasingly unpopular and ultra-neoliberal government of Emmanuel Macron, often dubbed “the president of the rich.”

Many strikers saw the mobilization as part of a protracted struggle with capital and the state for social protections for the working people, one that has been going on for decades, and in which the present generation of workers needs to assume its responsibilities. As a demonstrator in Lyon on December 10 put it: “My parents and my grandparents fought for my rights. Today, I am doing the same for my children and grandchildren. I would be ashamed if I were not out here” (Solenne de Royer, “Dans toute la France, des manifestants moins nombreux mais déterminés,” Le Monde, Dec. 11, 2019).

At stake in this struggle is Macron’s plan to raise the retirement age and cut pensions, especially for “special groups” of workers like transport workers and firefighters, who suffer grueling schedules and other forms of intense job stress. To be sure, many other grueling jobs, especially in the private sector, do not receive these relatively generous pensions and early retirement, but the solution is not Macron’s levelling down but rather a leveling up. While the global media sneer at France’s “fat” pensions and generous social protections, all of them the product of struggles in which some workers gave their lives, the facts of demography speak for themselves: The current French average life expectancy of 82 years is four years longer than that of the US, and second only to Japan among the large industrially developed countries.  Poverty among the elderly is also much lower in France than its neighbors like Germany and the UK, let alone the US. Thus, the Macron plan would mean literally the early death of many of France’s workers.

So far, opinion polls show that the French public strongly supports the strike, even accepting sacrifices like long walks in the absence of public transport. As one low-wage worker put it: “It doesn’t please us to walk. It doesn’t please us to have to strike. But we are obliged to, because we can’t work until 90 years old.” (Associated Press report, “Dozens Held in Paris Strike Over Pensions,” Los Angeles Times, Dec. 6, 2019).

For the past year, we’ve witnessed the enfoldment of mass movements and strikes across the Global South — from Sudan to Lebanon and from Iraq to Chile — but this week the tide of revolt by working people against neoliberal capitalism reached a major developed country, France. This alone makes the French events of global importance, as the struggles in the Global South, as revolutionary as they are, can never succeed fully without parallel and even supportive movements inside the world’s largest and most developed economies. Without that, they can be strangled by global capital, as seen even in oil-rich Venezuela. The kind of intersectionality in which French workers connect with those in South America or the Middle East is what can put the global capitalist system itself in question. While we are a long way from such a juncture, the French events need to be considered as part of that dialectic.

The big mobilization began on December 5, when workers in transport, sanitation, education, healthcare, banking, the electrical power system, and other sectors came out on strike, with over a million demonstrating on the streets.

In Marseilles, the strike hit the private sector in a big way, with the port city’s petrochemical plants experiencing work stoppages at levels not seen since the 1970s.

In other cities, the inspiration of last year’s militant Yellow Vests movement of rural working people was noted, with one striker suggesting that they had awakened a “sleeping” trade union movement. While this worker did not utter the phrase “labor bureaucracy,” her critique suggested as much (Solenn de Royer, “Dans les cortèges, la résurgence de 1995,” Le Monde, Dec. 6, 2019). One worker militant at a Paris train station admitted that the unions had not supported the Yellow Vests, and thus allowed the working people to be divided. But he insisted they had learned their lesson, and would remain unified this time.

Another sign of a new militancy manifested itself in the very large turnouts by railroad workers at the general assemblies preceding the strike.

Yet another new aspect was, in some places like Rennes, the way in which feminist groups and the Peasant Confederation joined the trade unions on the streets in a mobilization comprising over 15,000 people.

The mass strikes of December 2019 did not come as a bolt out of the blue. The past few years have witnessed several radical upsurges, most significantly the massive months-long Yellow Vests movement of 2017-18, the movement that for the first time put the neoliberal Macron government on the defensive, and after which its popularity fell permanently (see my earlier article, “The French Yellow Vests: A Self-Mobilized Mass Movement with Insurrectionist Overtones,” New Politics, Dec. 30, 2018). As recounted in an analysis published on the eve of the December 2019 strikes, the last year has also seen actions by university students, mobilizations for climate justice, and most significantly the November 23 march by tens of thousands of feminists in Paris to demand action concerning rampant violence against women (Plateforme d’Enquêtes Militantes, “5-6-7-8: After the Roundabout, let’s build the long bridge,” Notes from Below, Dec. 4, 2019).

Many are comparing the 2019 strikes to those of 1995, when several weeks of mass strikes forced another conservative government to scrap plans to undercut the social safety net. One difference, however, is that 1995 was during the decade of neoliberalism, at a time when even revolutionaries in post-apartheid South Africa accepted the notion that the “free market” was the motor of economic development. Today, beginning in Chile, the working people are declaring that they will kill off neoliberalism, while capitalism itself has been called into question in public opinion on a vast scale, ever since the Occupy movements of 2011.

We live in an era of reactionary populism as well, with rulers ever ready to plunge the knife into any form of human emancipation, and to stir up the vilest racism, misogyny, and Islamophobia.  Everywhere, such forces thrive on anti-immigrant racism, a most supple tool with which to divert class anger at worsening conditions of life and labor, away from its root, capitalism.

But the French strikes show that that class anger, and its possible unification into a large, progressive movement, lies just below the surface of modern capitalist society. At this writing, we cannot know if our French comrades will succeed, but we can say that they have planted some emancipatory seeds for the future, and not only in France.

About Kevin B. Anderson

Kevin B. Anderson’s authored books include Marx at the Margins: On Nationalism, Ethnicity, and Non-Western Societies and Lenin, Hegel, and Western Marxism. Among his edited books are The Power of Negativity by Raya Dunayevskaya (with Peter Hudis), Karl Marx (with Bertell Ollman), The Rosa Luxemburg Reader (with P. Hudis), and The Dunayevskaya-Marcuse-Fromm Correspondence (with Russell Rockwell).

Also By Kevin B. Anderson in Monthly Review Magazine

Books By Kevin B. Anderson