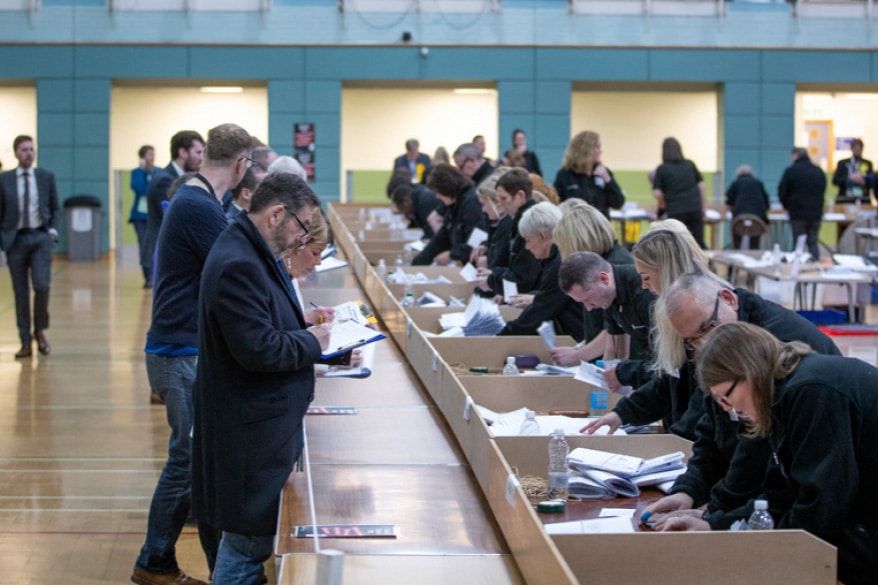 As soon as the scale of Labour’s shattering defeat began to emerge last night, pundits began to push the line that this was not just about Brexit but about Jeremy Corbyn, and more broadly the Labour Party’s significant shift towards socialism under his leadership.

No election is just about one issue — but the evidence backs up the argument strongly made by Labour MPs like Ian Lavery and Richard Burgon that Brexit was the defining factor.

Labour’s collapse was overwhelmingly in Leave-voting areas: the Midlands, Wales and northern England. The dynamics in Scotland were different, and equally disappointing, but it is a fact that Labour’s collapse there happened at the 2015 election — this week’s result marked a failure to recover more than a sudden reverse.

Political has-beens like Alan Johnson, loudly demanding that Corbyn take responsibility for the defeat and hasten his departure, cannot be allowed to obscure the central fact: Labour was perceived as a Remain party, going into the election promising a second referendum and with many of its shadow cabinet promoting an unambiguous Remain message over months and months.

Labour had various reasons, some good, some bad, to oppose Brexit deals put to Parliament by the Theresa May and Boris Johnson governments, but the impression these parliamentary antics gave the public — not inaccurately — was of a party seeking to frustrate Brexit entirely.

Labour was warned that this approach would be disastrous in the two-thirds of British constituencies that voted to Leave the EU in 2016; tragically, some of those who sounded that warning are among MPs who lost their seats in Thursday’s terrible rout, and include some of the most impressive socialists in the country — Laura Pidcock, Dennis Skinner, Laura Smith.

Journalists determined to pin the blame on Corbyn (backed up by long-term enemies of the leader like Alastair Campbell, who was heavily involved in campaigns to drive Labour towards a Remain position) ignore the fact that Labour’s leader was the first to call for Article 50 to be triggered after the referendum result in 2016, and long resisted the efforts to trap his party in a Remain box. Had Labour paid more attention to its leader, it might not have suffered such devastating losses this week.

Could Brexit alone deliver such a catastrophe for Labour? Its real impact rests on what it came to stand for. Communities abandoned and betrayed by successive governments, Tory and Labour, since the 1980s were right to feel disenfranchised by the long Thatcherite domination of both main political parties from the 1990s to 2015.

Labour’s loss of five million votes in the Blair years showed how long this loss of trust in the party has been building.

The Brexit vote was above all a vote against the Establishment, against the status quo, and it was a simple, two-option question with a very clear answer.

The refusal of the political class to accept that answer was clearly the final straw, and engendered the bizarre illusion that an Eton-educated Tory offering more of the same policies we have seen for a decade was the “anti-Establishment” candidate.

There is a strong risk, with swathes of traditionally Labour constituencies going blue, that England and Wales could move towards a “culture war” politics akin to that of the United States.

The eclipse of class politics by the identities of nationalism and unionism in Scotland is a step along that road, though the support for genuine social and economic change among many independence-backing Scots should not be underestimated even if it is not reflected in SNP policy.

That risk must be headed off by a rejection of the false narrative that Labour lost because its manifesto was too far to the left.

Big majorities support nationalisation of public transport, water and utilities and a tougher stance on corporations.

Canvassers confirm that Labour’s policies were popular — the problem is that few voters trusted the party to deliver them.

That lack of trust was inextricably connected to the party’s position on Brexit.

Twinned with that narrative is the idea that Corbyn personally lost the election. There are reports of hostility to Corbyn on the doorstep, though most canvassers report Brexit as a far bigger problem.

The idea that four years of character assassination by the print and broadcast media, bombarding an unusually honest, principled, courageous, kind and sharp — for Corbyn was consistently more alert to the risks of Labour’s Remain drift than his colleagues — politician with smears and slanders almost every day, could be connected to a lack of personal popularity was sneeringly dismissed by BBC attack dog Andrew Neil. “Is that the best you can do, the media?” he jeered at Burgon on election night.

But it was connected, and it was reinforced by the disgraceful connivance in those attacks by many MPs, whose personal contact with Corbyn meant they knew the accusations they threw at him were untrue.

MPs who have spent the years since 2015 attacking Corbyn have a greater responsibility than he for Thursday’s disaster.

And the attacks were inspired by Labour’s socialist policies. Those imagining that Labour would have benefited from a different leader are kidding themselves.

The full-throated war waged by the British Establishment against the prospect of change will be waged against any and every politician who genuinely offers it.

The right are pushing for a rapid leadership contest in a bid to take advantage of panic and despondency on the left as a result of the shocking defeat.

Corbyn’s decision to step down may have been inevitable, but the left must resist all calls for the process to be sped up.

A period of reflection is essential if the party is to learn the right lessons from defeat.

Already there are those claiming, in the face of overwhelming evidence, that Labour should adopt an even more pro-EU stance.

Such a development would all but kill the party outside London and also act as proxy for abandoning the radical socialist policies the party has developed since 2015, which remain both popular and essential.

The social and environmental crisis will not go away because we failed to elect a Parliament prepared to do anything about it.

Its vote share was higher than in 2010. This cannot mask how comprehensively it has been beaten, but it is important because it can inform strategies to resist the savage attacks on working-class people we know will be in the pipeline now Boris Johnson has a large parliamentary majority.

A mass membership Labour Party will be a huge part of that resistance, as will many on the revolutionary left and the trade unions.

Its growth and its clear socialist message are significant achievements for which Corbyn’s leadership deserves immense credit.

We head into the winter with soaring homelessness, rising child poverty, underfunded public services threatened with further fragmentation and privatisation.

Britain is a country of hungry children and cold, isolated pensioners. It has a government which marginalises and abuses disabled people, scapegoats and mistreats refugees.

These people need solidarity and practical help. Community organising is our first responsibility, and may lay the groundwork for building a more resilient and stronger left.