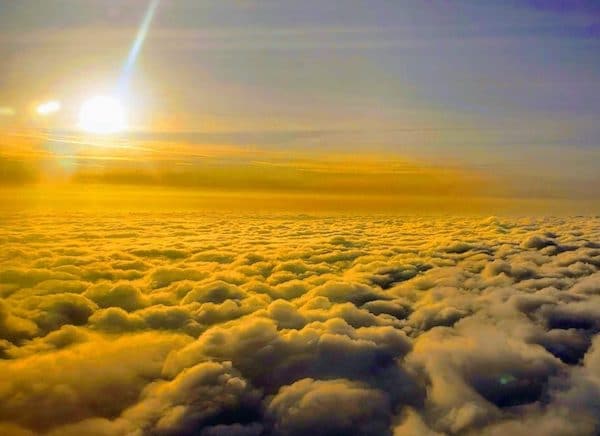 Solar radiation management is perhaps the most controversial type of geoengineering. It would create a medium to block the sunlight from reaching the atmosphere, but it would also change our planet forever. Photo credit: author.

Desperate times call for desperate measures. In recent years and in the face of unprecedented changes in the climate system, some previously unknown and risky solutions have been proposed to put a halt to the chain of climate disasters, or at least to slow down the speed of their onslaught. These methods, lumped under the heading of geoengineering, aim to reduce the impact of greenhouse gases on global temperatures, and thus on sea-level rise.

Many experts are already worried that public discussion of geoengineering might dissuade policy makers from making harder but more substantial choices to reduce greenhouse gas emissions. This is commonly called the “moral hazard” problem, and it has become a major argument against even pursuing further research into geoengineering technologies. However, we should be cautious about applying the moral hazard framework to geoengineering, because it may actually elevate it to a standing it shouldn’t have and distract us from discussing more fundamental ethical problems associated with it.

Geoengineering is any deliberate, large-scale intervention by humans in the climate system. Broadly speaking, there are two different types of geoengineering technologies. The first aims to solve climate change by addressing the carbon emissions problem. This family of technologies is sometimes called carbon dioxide removal or negative emissions technologies, as these methods try to not only remove the concurring emissions but also reduce the stock of carbon dioxide that is already in the atmosphere in order to turn back the clock and stop global warming.

The second group is solar radiation management technologies. They aim to reflect a fraction of sunlight back to space in order to generate a cooling effect that can offset the warming effect of greenhouse gas emissions. One of the most well-known examples of solar geoengineering is to spray tiny particles of sulfate aerosol into the upper atmosphere to scatter the sunlight—mimicking the effect of a volcanic eruption.

There are several different methods at different stages of development under each of the two groups. Some have been already commercialized while others are just ideas discussed in academic papers. However, and regardless of their different development outlook, geoengineering techniques impose some serious moral and ethical questions.

Why geoengineering is not a real fix.

Proponents of geoengineering often describe it as a rather quick technical fix for climate change compared to lengthy and hard mitigation efforts. In that sense, geoengineering is framed as a form of insurance against the worst outcomes of climate change or the last resort in the fight to keep the global mean temperature below its disastrous threshold. However, these framings come with an underlying assumption about the reliability, scalability, and acceptability of the geoengineering solutions.

First, it assumes that geoengineering is reliable and functioning with a proven track record. In reality, this is not the case. The best we have achieved with most geoengineering technologies so far is a series of uncoordinated, small, laboratory-scale tests with non-conclusive results. Inherent uncertainties in the climate system, coupled with technological barriers, have contributed to the limited functionality of current geoengineering proposals. This is certainly more of an issue for solar radiation management technologies. With no outdoor experiments to date, most of projections are drawn by studying past volcanic eruptions. However, computer models of the climate system show that the impact of a short‐term volcanic eruption would be quite different from a long‐term sustained aerosol injection.

Second, even if the technology were ready and proven, it is far from clear that it could be scaled up to the level that is a match for the climate change problem. For example, according to a 2018 report of the UN Intergovernmental Panel on Climate Change, to keep global temperature rise below two degrees centigrade (a promise of the Paris climate agreement), a deep decarbonization is required to reach net zero emissions by around 2050. The report states that “all pathways that limit global warming to 1.5°C with limited or no overshoot project the use of carbon dioxide removal on the order of 100 to 1000 [gigatons of CO2] over the 21st century.” However, such scale of carbon removal is simply unthinkable with today’s technologies. For comparison, the entire world population is collectively emitting about 40 gigatons of CO2 per year. The most suitable technologies for ramping up in that scale are bio-energy with carbon capture and storage and direct air carbon capture and storage. Still, both of these technologies are facing major hurdles to implementation, from land and energy use to investment and financing. Geoengineering is very unlikely to replace or downgrade the importance of mitigation efforts because it simply does not match the scale of the problem.

Finally, social and political acceptability remains a major barrier in pursuing geoengineering technologies. The first problem here is the lack of knowledge among the public about what geoengineering really is. Public opinion surveys show a direct link between learning about geoengineering and the public support for research into it. The second problem is that deliberate manipulation of the climate system imposes great ethical questions with implications that will extend beyond our current generation. Finally, there are political challenges as to how to govern the deployment of these technologies on a planetary scale. The threat of unilateral action, particularly when it comes to solar radiation management through aerosol injection, in our current fragmented world seems more real than any time before, bringing a particular urgency to the governance problem. But carbon dioxide removal proposals are no less politically fraught. Mass afforestation and large-scale bio-energy with carbon capture may threaten food security, water resources, and biodiversity.

Can moral hazard apply to geoengineering?

There are, in general, two ways of thinking about the moral hazard problem. In neither case does geoengineering fit. First, moral hazard can be applied to cases with imperfect or insufficient information. Imagine a case where you hire a contractor to fix the air conditioning at your house. The contractor may use low-quality materials to get your air conditioning back to work quickly, but it leaves you exposed to higher costs down the road. Since you do not have any expertise in determining what the contractor has actually done, you are at his or her mercy. In other words, an easy fix, combined with imperfect information, may discourage people from choosing the right alternative.

In the climate change realm, this may seem to be the case at least when people are talking about solar radiation management. Spraying aerosols into the atmosphere would only reduce the global mean temperature— it would not address the greenhouse gas emission problem as the underlying cause. It seems like an easy fix that will discourage or distract people from choosing the right alternative: more serious emissions reduction efforts.

Furthermore, not every climate-driven event is related to temperature, and not every region or country has the same desired temperature target that can be achieved by solar radiation management. Therefore, it is hard to conceive of a situation in which geoengineering would be deployed in such a satisfactory way that would dissuade people from seeking more substantial decarbonization pathways.

The second approach to thinking about moral hazard frames it as the problem of illusive protection. In this case, providing an easy fix makes people take unnecessary risks, thinking that they are immune to the consequences of their actions. A classic example is the invention of the seat belts for cars—some say they pose a moral hazard because they have led people to drive more carelessly. Those who worry that geoengineering poses a moral hazard have argued that, in this case, providing geoengineering options will encourage people to consume more fossil fuels and care less about shifting to a green lifestyle. However, this argument assumes that we know, rather perfectly, that solar radiation management will work and will reduce the temperature. In reality, we do not know how large-scale solar geoengineering works because even small-scale experiments have not yet been undertaken. Further, even if it works perfectly, we do not know if it will provide the protection that supposedly will give people the illusion of immunity. The climate system is a highly complex and interconnected collection of thousands of factors, and deploying solar radiation management could be more dangerous than not doing it.

In sum, the moral hazard framework is a good way of thinking about problems where there are two competing solutions, one hard but substantial and the other one easy and rather superficial. The key here is that, for moral hazard to apply, both options must be real and functioning. But geoengineering is not a functioning option, much less an easy one. Those who use the moral hazard framing to argue against geoengineering are unwittingly reinforcing the mistaken notion that it might be some kind of an insurance policy. The more scientists wring their hands about a moral hazard, the more the public may come to see geoengineering as the quick fix that it isn’t.

Geoengineering in many ways resembles genetic engineering. Both technologies may hold promise in addressing serious problems that humanity faces today. As genetic engineering would solve only a subset of health issues and would not be a panacea, no serious objection has been raised against it on the basis of moral hazard. No one thinks that it will dissuade societies from investing in other areas of medical science and public health. Similar to genetic engineering, geoengineering is not a final solution, nor an easy fix. It would be best understood as a complement to ongoing decarbonization efforts—but only once the reliability, scalability, and acceptability issues have been resolved. Using the moral hazard framework is a distraction from the more fundamental ethical challenges facing these technologies.