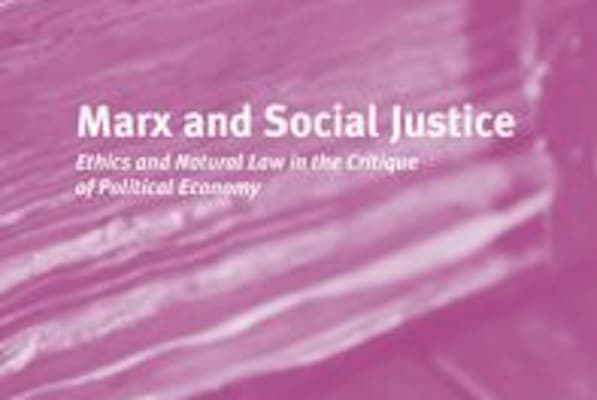 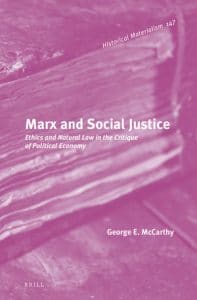 In this book, George E. McCarthy, who is Professor of Sociology at Kenyon College, presents a new reading of Karl Marx’s theory of social justice and provides a detailed and comprehensive overview of the ethical, political and economic foundations of this theory. According to McCarthy, Marx rejects the view of justice in liberalism, which is limited to individual rights and fair distribution and provides a new one based on Aristotle’s definition of social justice grounded in ethics and politics. For Marx, justice is a form of ethical community based on beneficence, equality, and freedom which nurtures and enhances the function or end of humanity. Marx applies his view of justice to a broad range of issues, including workers’ control and creativity, producer associations, human rights and human needs, fairness and reciprocity in exchange, wealth distribution, political emancipation, economic and ecological crises, and economic democracy.

There was a discussion about whether Karl Marx has a theory of justice. The question is important because Marx seems to face a dilemma here. Marx argues that ethical and political values are tied to the mode of production of each historical period when presenting his historical materialism and claiming that a revolution is needed to change the present social systems of capitalism when presenting his ethical analysis. However, he “cannot use moral values to undermine the normative foundation of the social system, as moral values themselves are only product of the material conditions inside this social system” (4). In other words, there exists a tension between Marx’s historical materialism and his ethics here.

This discussion is centred on a Tucker-Wood Thesis, which is primarily put forward by Robert Tucker and Allen Wood: “Marx eschewed grounding his critical social thought in any specific theory of justice or moral philosophy” (2). Rights and distribution, as a part of the ethical and political values, for Marx, are tied to the mode of production of each historical period. It seems to Tucker and Wood that this view follows that there are no transcending values that could judge the economic system as unjust. And if so, capitalism is neither unjust nor inequitable, but just evil. Opponents of Tucker and Wood attempts to provide a distinctive theory of juridical justice in Marx based on legal rights and economic distribution. And some, adopting the third route, claim that Marx develops a moral philosophy based on principles of freedom, self-determination, self-realization, well-being, and human dignity without a theory of justice (1).

Different from all three above, McCarthy argues that Marx has a far broader definition of justice than the one used in the judicial and political sense accepted by modern liberalism. According to McCarthy, Marx establishes his whole critique of political economy in a framework of Aristotle’s theory of ethics, politics and social justice.

McCarthy argues that Marx “integrates ethics, politics, science, and history into his overall social theory” (7). Especially, Marx follows the Greek holistic view of justice, which “presents the totality of society, its social institutions, and the integrative functions of laws, customs, and traditions” (9). According to Aristotle, justice means “living the virtuous and rational life of the soul within a political and economic system that encourages self-realization, freedom, and political self-determination” (9). This is different from most thinkers post-Enlightenment, for example, for Aristotle, ethics and politics are integrated.

McCarthy argues that Marx formulates his theory of social justice following in this tradition. According to McCarthy, Marx views justice as a form of ethical community based on beneficence, equality, and freedom, which nurtures and enhances the function or end of humanity. This view of justice is applied to a variety of issues in Marx’s writings: the self-realization and self-determination of its species being; physical well-being and spiritual enlightenment; human creativity, virtue, and happiness in the workplace; a symbiotic balance between humanity and nature; the communal fulfilment of economic reciprocity and need; and, finally, the industrial democracy of producers’ co-operatives and workers’ communes, as well as the political democracy of human rights and emancipation. Marx “redesigns these issues in terms of natural law based on human nature (species being), human needs (self-realization and self-determination), the natural environment, and democracy (equality, freedom, and participation)” (9).

McCarthy begins with a detailed analysis of John Locke’s attempt to integrate the ancient natural law with the modern natural right into his seventeenth-century theory of the state and civil society in Chapter 1. Locke attempts to establish a balance between the modern defence of individual liberty and rights, and the classical recognition that humans are social and political animals (34-42). However, for Locke, natural law was only an initial restriction on the application of rights, which is dissolved in the process of commerce and profit accumulation. In the end, the property right overwhelmed other rights, and natural law is repudiated. So, for McCarthy, Locke shows how liberalism and natural rights, on the one hand, and the classical ideals of justice and natural law, on the other, were incompatible philosophical traditions (45-55). Faced with a similar dilemma of the natural law and natural rights dichotomy, Locke used natural law to justify rights, property, and a market economy with the potential for unlimited accumulation. In Chapter 2, McCarthy argues that Hegel, on the other hand, sees the same problem and attempts to integrate the two opposing traditions into the modern liberal state. Hegel does not attempt to abandon the classical ideal, but to incorporate it into its living spirit (75-106).

After outlining a basic reading of previous efforts facing the conflict between natural law and natural right, McCarthy proceeds to provide a reading of Marx’s solution to this problem. Marx, according to McCarthy, redefines and reintegrate Hegel’s theory of the ethical community (ancients) and individual moral sovereignty (moderns) into a democratic, moral economy by transforming the latter’s idealism into a materialist view of history, freedom, and self-consciousness (106-111). McCarthy goes on to provide his reading of Marx’s theory of social justice in six chapters, which are designed following the parallel between Marx’s theory and Aristotle’s theory of social justice.

McCarthy discusses ethics, virtue, and natural law in Marx first. In Chapter 3, McCarthy discusses Marx’s view of social justice in civil and legal justice, in which Marx integrates natural rights and natural law in his primitive theory of emancipation and human rights. In Chapter 4, McCarthy discusses Marx’s view in workplace justice, in which Marx re-joins ethics and politics by following Hegel’s writings and views social justice as the fusion of horizons of ethics and politics into one version of participatory democracy in the workplace and polity. In Chapter 5, McCarthy analyses human beings’ relationship to nature in Marx’s theory, as “[a] just society would thereby attempt not only to re-establish a harmonious balance between the individual and society, but also between society and nature” (193).

After that, McCarthy continues to discuss the structure of democracy, economy and social justice in Marx. In Chapter 6, McCarthy argues rights can never be higher than the economic structure of society because rights reflect that society in its moral values and legal institutions in Marx’s theory. Rights reflect both the limits and oppression of the prevailing mode of production on the one hand and reflect the idealism and dream of future possibilities on the other hand. However, as “the highest need of human beings is the freedom and self-realisation of the human potential for self-determination of species life and social activity,” for both Aristotle and Marx, this means the highest form of virtue and highest form of happiness is a life of social justice. And this is only possible within an ethical community (248).

In Chapter 7, McCarthy argues that “Marx has integrated his work on ethics and politics in a manner similar to Aristotle’s integration of the Nicomachean Ethics and the Politics” (283). The classical ideals of a democratic polity in Ancient Greece and Aristotle’s ideal state merge with the socialist principles of cooperative production into a new historical form which “Marx characterizes as ‘a national production upon a common plan, thus taking it under their own control, and putting an end to the constant anarchy and periodical convulsions which are the fatality of capitalist production’” (284).

Finally, in Chapter 8, McCarthy argues that Marx undertakes a similar critique of political economy and the laws of value production and exchange following Aristotle. Marx argues that “the inner logic and rationality of this economic system is incompatible with the values and principles of a good and virtuous life” (312). Again, economics becomes a sub-branch of ethics and politics. The supporters of the Tucker-Wood thesis contend that there is no injustice in the market, as no one is disadvantaged in exchange, i.e., everyone is fairly reimbursed for the expenditure of their labour-power. According to McCarthy, however, there is only justice in the exchange measured by wages and labour-power, but no justice measured by wages and labour. As Marx distinguishes labour power and labour, McCarthy points out that “there is a clear violation of the standards of social justice” (327). In other words, natural rights are not violated because the circulations of commodities are fair. They are violated in the creation of surplus-value in production because people only get paid for their labour power rather than their labour. Although Marx does not use the term “justice” in his political economy, according to McCarthy, Marx’s analysis is grounded in Aristotle’s theory of moral economy and thus there is no need to use the term justice. By combining ethics (natural law and justice) and science (the law of value and the contradictions of capital), Marx provides the foundations for true revolutionary social change, instead of only condemning capitalism based on natural law (327-341).

McCarthy provides a detailed reading of some important passages of Marx’s writings and provides an explanation within a framework of seeing Marx as a follower of Aristotle. The book is well-organized and well-focused. Nevertheless, I still have some concerns.

First, the support of reading Marx as a follower of Aristotle seems weak sometimes. McCarthy arranges six chapters to illustrate the parallel between Marx and Aristotle in different aspects of Marx’s theory. However, the support of McCarthy’s reading differs in these chapters. He provides a detailed analysis relating Marx to Aristotle in the final chapter, which is the core chapter but offers far less analysis in other chapters, such as Chapter 5 on ecological justice. It is also unclear whether the similarities between Aristotle and Marx in several chapters do support McCarthy’s parallel. For example, in Chapter 7, although Marx might integrate his work on ethics and politics in a manner similar to Aristotle, it is unclear whether this similarity has any significant influence on Marx’s theory of democratic socialism.

Even if one grants that Marx does follow Aristotle in developing his theory of social justice, it is unclear how McCarthy solves the dilemma for Marx after rejecting the Tucker-Wood thesis. It may be true that Marx has a theory of social justice based on natural law. However, as natural law seems to be transcendent, it seems to contradict the widely accepted view that Marx sees moral values as tied to the mode of production of a historical stage, and thus may demand a weightier burden of justification. On the other hand, sometimes McCarthy seems to imply that capitalism is self-refuted rather than unjust, i.e., the logic of capitalism implies contradictions inside the society which leads to the end of capitalism (340). Nevertheless, if so, we are back to another form of the Tucker-Wood Thesis, i.e., capitalism is not unjust but only self-refuted. In other words, even granting McCarthy’s reading of Marx with Aristotle’s definition of social justice, it is unclear whether we could avoid the dilemma which encapsulates the Tucker-Wood thesis.

Xuanpu Zhuang is studying for a PhD in Applied Philosophy at Bowling Green State University.