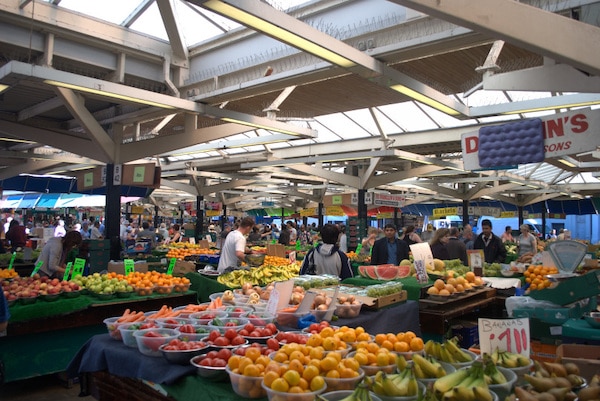 Economic imagery pervades societal discourse. Part of this imagery projects markets as existing everywhere; the common societal parlance sees talk of the car market, the grocery market, the computer market, or, simply, the market. Yet, excepting traditional marketplaces or medinas, these markets have no physical manifestation. Unlike with other major social institutions there is no where to visit; there is no headquarters. Instead, markets are said to exist when there are competitors in the provision of services or goods and where each competitor has a fair and equal chance of succeeding. The market, then, exists in a metaphorical, rather than physical, sense–it implies that the capitalist system operates diffusely like a marketplace, rather than there being an actual marketplace in which economic transactions take place.

The further extension of economic imagery has seen the market metaphor applied to the provision of political and economic ideas, with the notion being that there exists a level-playing field on which ideas are free to compete and that this competition will weed out weaker ideas. Hence, “no platforming” of racist or homophobic speakers should be staunchly opposed as it will impede the competitive destruction of abhorrent ideas. An important ancillary notion is that any idea that has come to be orthodox received wisdom has justly achieved this status through free and fair competition in the marketplace of ideas.

The problems with this account of the ideational development of society are legion, but I’ll limit myself to explaining just three, namely 1) product heterogeneity, 2) distribution of ideas, and 3) production of ideas.

Product heterogeneity: Ideas are Not the Same

First, there is the issue of product heterogeneity. Product heterogeneity is a problem for accounts of competition, as a greater degree of product dissimilarity reduces the rivalrous relationship between products; more dissimilar things are less in competition with one another. A Porsche is not in competition with a Lada, a Nokia 3310 is not in competition with an iPhone, nor is a rugby team in competition with a cricket team. In the ideational realm, some ideas are more complex than others, there are some ideas that people are socialised into believing from a young age, and there are some ideas that run counter to our everyday experiences (like the earth being a globe, for instance, when what we as individuals see is largely flat). What this means is that the marketplace of ideas is working with a pitted and fissured playing field, with many and various niches in which bad ideas can prosper, that impedes competition between ideas and that can advantage some ideas relative to others–it is not a competitive free-for-all, or an open field.

More importantly, ideas about the social world are rarely free-standing, but are instead linked into a wider panoply of (socially-derived/largely systemically endogenous) beliefs. It’s more the case that you get a trolley full of related ideas, rather than an endless pick ‘n’ mix. What this means is that a new idea that fits broadly within status quo understandings is advantaged by virtue of its correspondence to prevailing wisdom, rather than its own virtues. Behavioural economics, for example, has gained popularity because while it challenges economic orthodoxy through pointing out deviations to economic rationality, this approach puts orthodox ideas of rationality at the heart of its analysis, rather than taking a heterodox approach that would likely involve just scrapping the idea and starting from a much more realistic take on human behaviour.

Distribution: Not All Ideas are Equally Accessible

In other words, media organisations are not neutral in their distribution of ideas, but have interests that will affect their selection of ideas to distribute, will influence the framing of ideas that they do distribute, and will serve to shape the reporting and discussion of real world events; all of which impacts on the capacity of ideas to engage in free and fair competition; the playing field is not just fissured, it is also slanted to advantage some ideas. In the aftermath of the Global Financial Crisis in the UK, for example, the crisis quickly came to be framed by the media and politicians in such a way that it was understood as caused by too much government spending, with other alternative framings and explanations of the crisis cut out from media representation.

Finally, there is the problem of production. Prior to competition in the marketplace of ideas, ideas must be created and developed. Yet, in academia (a major source of ideas in society) success breeds success (or, to put it in academic terms, the “Matthew effect” impacts upon academia). Winning a round of funding opens up more opportunities for funding and increases the likelihood of winning another round, which sees the development of cumulative advantage whereby the playing field in the development of ideas becomes less even over time. A similar, and related process, can see cumulative prestige accrue to individuals (and to ideas), whereby positions at prestigious institutions or membership of prestigious editorial boards open up more prestigious opportunities, which can then also impact on the distribution of ideas.

Furthermore, the gatekeepers of the systems of funding and prestige are not neutral overseers of the ideational production system. Funding gatekeepers will have interests (or priorities) derived from their funders, be they governmental, corporate, or charitable organisations, and these priorities will shape the relative capacities of different ideas to be developed. Likewise, prestige gatekeepers (such as editors of prominent academic journals) have an interest in preserving their prestige, and since their prestige is tied up with the ideas they themselves promote, they have an incentive (and the power) to exclude ideas that don’t broadly accord with their own; thereby again privileging prevailing ideas.

Moreover, there is also the lavish funding of ideas on the basis of economic interest, rather than any intellectual or academic merit. Beyond academia (although academia is not immune from operating in such a manner), think tanks have been major cultivators of, and dealers in, ideas and have operated in a strongly interest-based manner due to their reliance on outside funding. Between 2003 and 2010, for example, U.S. climate change denial think tanks attracted donations totalling $900 million annually from various conservative funders. Such funding will necessarily skew what ideas are developed, which then impacts upon what ideas get into the marketplace of ideas in the first place.

Why the Marketplace of Ideas Isn’t a Level Playingfield

So with the marketplace of ideas there are niches in which bad ideas can prosper, ideas aren’t free-standing but come with baggage, ideas are advantaged due to their accordance with the status quo, interests are involved in the distribution of ideas, and the production and development of ideas strongly tends toward cumulative advantage rather than continual competition. These problems strongly caution against thinking that ideas do, or will, triumph because they are “more competitive” or that weaker ideas will be defeated.

Honestly though, ignoring theoretical critique, just looking at a world where homeopathy is a $3 billion industry in the U.S. alone, or that Flat Earthers are growing as a group, or that vaccination rates continue their drop since Andrew Waterman’s (now retracted) papers linking vaccines to autism strongly cautions against the idea of weaker ideas being weeded out. If these ideas can grow, despite a strong body of hard scientific evidence contradicting them, what hope is there of competitive destruction in areas, such as economics and politics, where the evidence is much more equivocal and necessarily subjective.

The deep problem with the concept of the marketplace of ideas is that it requires an aseptic world without hierarchy, without authority, and without power. When placed in the context of a world with all of these things, the marketplace of ideas becomes nothing more than a complacent moral discourse that offers smug reassurance that dominant ideas are simply the most convincing and evidenced. In this manner, the “marketplace of ideas” works similarly to the idea of “meritocracy”, in that it stresses you get what you deserve, and if you have got it is deserved. The discourse, then, works to reinforce the status quo and serves to hide deep power and resource inequalities within society by stressing that the playing field is level when it is anything but. If the competitive destruction of weaker ideas was actually the case, the marketplace of ideas would be a smoking ruin.

Terry Hathaway is a Lecturer at the Norwegian Study Centre at the University of York.

NLG calls upon U.S. to immediately comply with International Humanitarian Law in its illegal occupation of the Hawaiian Islands
Uncle Sam the hit man