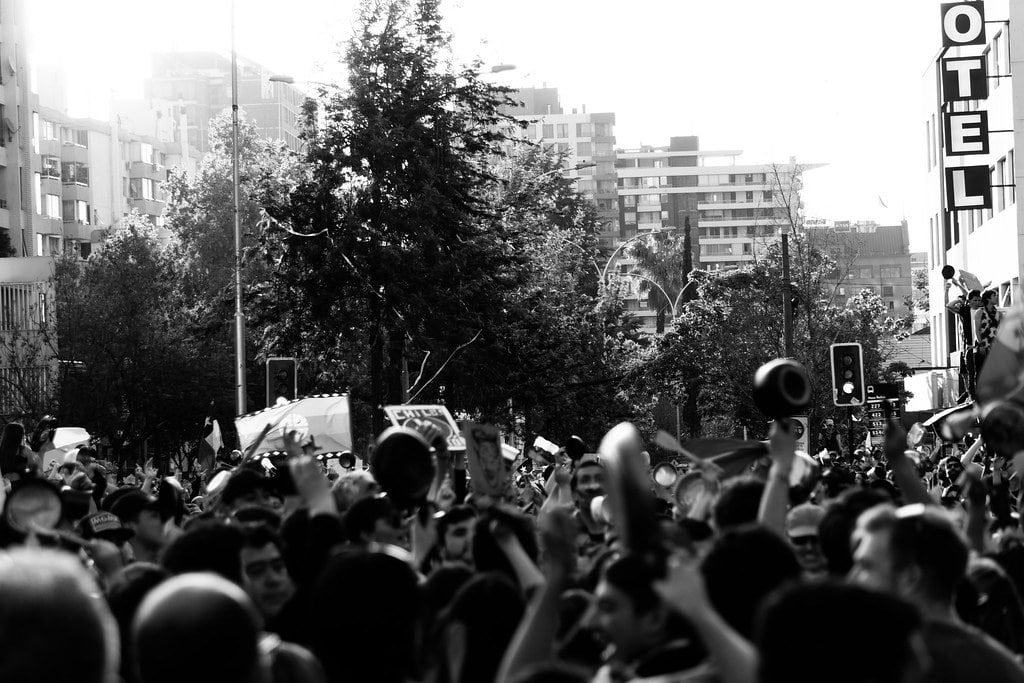 Chile Woke Up by Diego Correa. Some rights reserved.

Santiago high school students were the spark.  Rejecting a fare hike, they jumped over subway toll barriers on October 18, 2019. Students filled the streets in other cities. Police action led to injuries and arrests. Some 1.2 million people occupied Plaza Italia in Santiago a week later. After three months, on January 18, Santiago marchers arriving from three plazas demonstrated outside the Moneda Palace, the seat of Chile’s president. Protests took place in 19 other cities.

Aggrieved Chileans have demonstrated and marched throughout the country, week after week. They’ve staged three general strikes. It’s been Chile’s “most intense and most massive social uprising,” reported an observer. Students have been marching in the front lines. They mobilized massively in 2011. 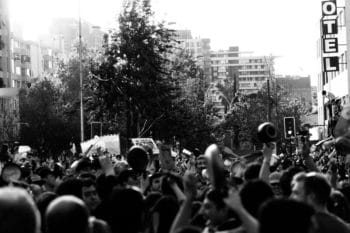 Chile Woke Up by Diego Correa. Some rights reserved.

Protesters want Piñera to resign. They oppose privatization of health care, pensions, and education; sell-offs of water rights and mineral resources; and the abuse of indigenous peoples. They call for a constituent assembly.

Government repression has been brutal. So far 29 protesters are dead, 22,000 have been arrested, and 3,600 wounded—including 405 persons with eye injuries, some having lost eyes.  Directives issued on November 7 authorized detention on mere suspicion, search of backpacks, police entry into schools and universities, and penalties for bad-mouthing  police, presence at a barricade, and wearing masks.

By January 13 Chile’s Congress had overwhelmingly approved legislation that “criminalized methods of popular struggle.”  Piñera reportedly had taken on “powers of a dictator.” Alone among “all the political forces,” leftists included, the Communist deputies voted against the repressive measures.

Presently only 14 percent of the adult population identify with a political party. Since October, political parties of the right and left have lost active members. According to a survey, five percent of the people look to the government for representation and 57 percent, to social movements; 30 percent of respondents say they are unrepresented; 62 percent attribute the uprising to economic crisis.

Social Unity is promoting the constituent assembly in conjunction with a few leftist parties. At a meeting of those parties on January 18, Communist Party President Guillermo Teillier indicated they anticipate, “strict coordination with the social world to give expression to many demands in the streets. They will vote for a constituent convention where everybody is chosen democratically.”

On April 26 Chileans will vote on whether to hold a constituent assembly and on what kind of assembly. The government and its allies propose an assembly with half the members chosen by the Congress and with a two-thirds majority required for decision-making. The opposition wants all assembly members chosen by the public. The super-majority provision is seen as delivering veto power to conservatives and centrists.

Struggle over Chile’s Constitution reflects problems left over from the transition in 1990 from dictatorship to democracy. The current Constitution originated in 1980 under the Pinochet regime. It retains toxic elements despite modifications after 1990.

The arrangement in 1990 called for Pinochet giving up power in return for continued constitutional protection of the market economy, police, and military. Chilean analyst Paul Walder sees a similar bargain cropping up now. A new or newly- modified constitution is pay-back for no fuss about severe repressive measures. Center-left politicians support the pact which protects a Constitution which serves capitalist objectives.

Without highly visible leaders or designs on state power, rebellion in Chile might qualify, one observer suggests, as a “passive revolution.” According to one expert, the hallmarks of that phenomenon—described by Gramsci—are long-term oscillation of revolution and restoration and struggle over societal institutions. Chile’s process has been long: agitation in the 1950s and 1960s, the Allende presidency (1970-1973), and varied struggles from 1990 on.

The U.S. government facilitated the military coup in 1973 and is surely paying attention to Chile now. U.S. officials may be confident in the staying power of oppressive forces there but undoubtedly have concerns about the future of investments and trade. As noted by a business-friendly news service:

Chile has long been an oasis of stability in volatile Latin America and was consistently among the strongest and most market friendly democracies. But it’s now mired in wide-ranging disruption and chaos and pulling down asset values in the rest of the region.

There is a lot at stake. U.S. exports to Chile in 2018 yielded $15.3 billion and imports cost $11.4 billion—copper imports, $3 billion. Copper production was nationalized in 1971; now private corporations control 70 percent of the industry. They pay “practically nothing” in royalties.