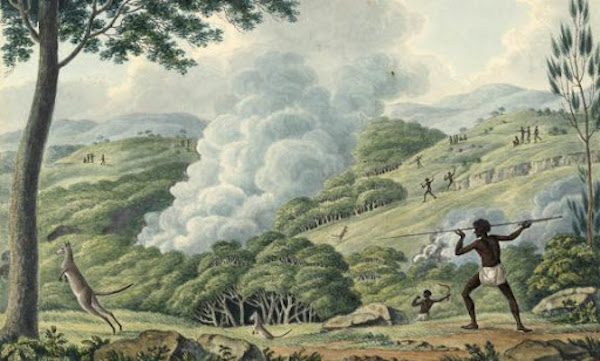 This summer, we have looked through the gates of hell at the apocalyptic result of the dispossession of those who nurtured the land for 65,000 years. Understanding the history of the last 232 years is imperative if we are to conceptualise a future in which the land, the animals and the people they sustain can live in harmony once again. That future is not one that capitalism can deliver.

Captain James Cook, on his voyage of 1770, wrote about the “wonderful manner” in which the people he encountered “produce fire with great facility”. He admired “the large plains, diversified with woods and lawns” that resulted from their diligence. The first invaders who followed from 1788 wrote of “park like” landscapes. But racist, colonial arrogance blinkered the invaders’ view of the people living on this continent and bred lies that justify the destructive practices of capitalism to this day. Bill Gammage, in his magnificent book The Biggest Estate on Earth: how Aborigines made Australia, offers this insight into the mindset of the foreigners, from a country where only gentry presided over parks:

It might seem a small jump to think them [the “parks”] as man-made as in Europe. In fact, the leap was so vast that almost no-one made it. Almost all thought no land in Australia private, and parks natural. To think otherwise required them to see Aborigines as gentry, not shiftless wanderers. That seemed preposterous.

Tony Abbott declared in 2014 that, before 1788, Sydney was “nothing but bush”–illustrating the longevity of this prejudice, which underpinned the lie of terra nullius. Gammage, who studied in detail the changing landscape under European occupation, concludes:

A landscape once carefully maintained has been let run wild.

Within a few short years, “explorers” and “settlers” recorded that Aboriginal people were remarking how much drier their environment was since these invaders came. Marauding across meadows of yams, trampling native grasses that preserved moisture in the soil, the invaders’ crashing, hard-hooved animals destroyed precious sources of water and compacted soft, moist soil. Rain then no longer seeped into absorbent land, but ran off hardened surfaces, gushing into wandering waterways, cutting the earth into canyons through which rivers ran rather than settling across wetlands.

It’s true, as climate deniers like to proclaim, that drought is a natural feature of much of the continent. But Aboriginal society prepared for it. They preserved areas where animals were protected from slaughter by law so that in times of drought they survived, able to spread out again when the rains came. Westerners conceptualise them as “sanctuaries”. As one historian   writes: “These sanctuaries were scattered all over the landscape–wherever there was important Dreaming there was a sanctuary area”. In some places, by ingenious use of fire, kangaroo grass, which preserves water in its clumped stems and roots, flourished and preserved moisture during drought.

In the rapacious drive to produce beef, wool and agricultural products for markets, woodlands were cleared and land was over-grazed. Rain drew the ambitious into areas prone to drought, a fact of which they were ignorant because their racist arrogance prevented them from learning from those who knew. Kangaroo grass was eradicated on such a scale it became almost extinct, making drought more severe. The extinction of animals can begin a cascading impact on the environment. The burrowing bettongs , once found across much of central, southern and south-western Australia, now almost extinct, “like bandicoots, are important ecological engineers”, according to Bush Heritage.

Their digging plays an important role in decomposition of leaf litter (thereby reducing fuel loads and fire risk in dry grassy forests and woodlands) and in dispersing fungal spores and plant seeds.

The delicate management of an intricate system of drought, floods and fire, encapsulated in the fabric of Aboriginal culture, could not survive the onslaught of invasion. Its complexity and harmony could not even be conceptualised by those whose first concern was to establish boundaries around private properties–boundaries that signify the rampaging, exploitative competition that defines the capitalist system.

Aboriginal society was non-hierarchical and organised collectively. They had no concept of private property, so fire could be organised based on universal principles that might involve cooperation stretching over vast areas, based on detailed local knowledge of plants and animals. Members of their communities involved in managing fire would never be expected to do so without sustenance, denied shelter and care for their families. But that is precisely what this capitalist society, with all its wealth and technology, expects of thousands of unpaid firefighters.

In any case, Aboriginal people were not fighting fire but using it–to promote soft green shoots to attract kangaroos to eat; to weed out unwanted plants and encourage others. Integrated into their world view, its use was finely tuned to the rhythms of the seasons. It was an integral part of their rich culture in which human need was the guiding principle of land management.

Competition for land, which breeds greed and undermines human solidarity, was the world of entrepreneurs looking for a better life in the new colony. In Western Australia in 1846, a series of letters from settlers to the governor illustrate the collision of these cultures. Charles Symmons, “protector of natives” in the Swan Valley, responded to complaints that the Nyoongar destroyed settlers’ crops every year with fire. They were simply fulfilling “one of their most ancient and cherished” traditions, he wrote. But a resident magistrate clarified the general attitude: “If we are to keep flocks it is quite clear that the lands must be preserved and not fired”. He proposed “to warn them against solitary confinement and Rottnest”, a penal island off the coast.

Less hostile settlers revealed that many of the fires that settlers complained about were started by careless Europeans. The most important agenda was gaining uncontested access to Nyoongar land. What better way to drive them out than to blame them, not just for their controlled fires (which many obligingly adapted to the settlers’ needs), but also for those started by settlers themselves. The magistrate admitted that wild bushfires were not started by the Nyoongar:

[They] laugh at our idea of letting a fire escape them if they wish to put it out.

Cynical hypocrisy aimed at concealing the real agenda permeates debates to this day. The actors vary, but the substance does not. The logging industry, after every bushfire disaster, blames “greenie” policies that protect forests and national parks. Open them up to us as a bushfire mitigation program, they say. But the royal commission into the catastrophic 1939 fires in Victoria concluded that logging had increased the severity and the extent of the fires.

I know why the industry is talking about this … this is crass opportunism to take advantage of a catastrophe.

How can we re-establish a society in which human need is the driving principle and collective responsibility makes it possible? That was the ethos that ensured the survival of the communities on this continent for 65,000 years before 1788. This society has increasingly destroyed the intricate balance of the natural world so carefully managed by the original custodians. Capitalism cannot put in place systems to repair that damage, let alone reverse the catastrophic consequences of climate change, which exacerbates every aspect of that destruction.

It is tempting to think that, if only enough landowners can be trained by Aboriginal cultural burners to regenerate their land, we can protect against a repeat of the devastation this summer. Some can and do create pockets of land that survived the raging fires. And this is rightly celebrated. But this cannot deal with huge, flammable pine forests, with mines, with barren land where rainfall has declined and temperatures keep rising. It cannot prevent the effects of logging and other destructive practices.

The problems of the environment cannot be reversed simply by technical means, even when they point to solutions. It is a social and political issue. The society that created the catastrophe cannot repair the damage. Nothing is funded unless it directly makes profits or is a means of defending one lot of exploiters against competitors. Read any enquiry, any discussion of what to do, and you find that every viable solution is met with the inevitable capitalist objection: it will be very expensive.

It’s not that those who rule do not know. The rich and powerful attend seminars to discuss how to protect themselves from the rest of us. A futurist revealed that at one of their gatherings they discussed “making guards wear disciplinary collars of some kind in return for survival” in a climate emergency. The National Disaster Risk Reduction Framework of July 2018 warned the government to prepare for natural disasters on “unimagined scales, in unprecedented combinations and in unexpected locations”, causing damage to communications, power, water and other essential services. They suppressed it rather than admit that climate change is real.

The 2009 Australian Defence White Paper and a Senate enquiry of 2018 discuss not how to tackle climate change but how to strengthen “national security” against climate refugees and competition from other states over scarce resources. So, 200 troops are sailing into a stand-off with Iran, rather than being mobilised to the fire zone. Firefighting emergency services are clearly underfunded for the tasks they face, while the Australian government subsidises, not just tolerates, the fossil fuel industry to the tune of $42 billion a year. It’s not as if we can conduct a collective, democratic discussion and make rational decisions about how to reallocate that and the $70 billion committed to submarines and fighter jets, plus $38.7 billion in the annual defence budget.

We need a massive reversal of priorities. Millions know it. There is widespread hunger for justice and climate action. On the other hand, we’ve seen the response of the rich and powerful. Governments, both Liberal and Labor, ignore the clamour for climate action while trying to silence us with police attacks on protests and authoritarian new laws criminalising climate activism. It is time for a new project. We need to build a movement so radical and determined that it can overthrow these authoritarian rich and powerful. Only then will we be able to begin to build a socialist society in which human need comes first again. Only then will we be assured of preventing disasters like the apocalypse of 2019-20.