Time‘s naming Greta Thunberg as Person of the Year (12/23–30/19) was a symbol of rising media interest in the threat posted by climate change.

The year 2019 was, by all accounts, the year of climate awareness. To an unprecedented degree, in the three decades since scientists first warned of the imminent dangers of rising carbon emissions and the resulting global warming, we were transfixed by record-setting heat waves, wildfires in California and Australia, and, of course, Greta Thunberg’s sailboat visit to the U.S., capped off by her selection as Time‘s Person of the Year (12/23–30/19).

Yet the newfound attention to climate came with a strange disjunction: Being aware of this massive threat to humanity hasn’t translated into much concerted action to stop it. As Elizabeth Kolbert wrote in the New Yorker (1/13/20):

If in the past year (or the past decade) the world began to understand how dangerous climate change is, it certainly didn’t act like it. In the past ten years, more CO2 was emitted than in all of human history up to the election of JFK.

That same disconnect—recognizing the reality of climate change, but not who’s responsible or what could be done about it—is reflected in today’s media coverage of climate. Ten years ago, according to data compiled by the Media and Climate Change Observatory (an international academic consortium hosted at the University of Colorado Boulder), fewer than 300 stories a month mentioning “climate change” or “global warming” appeared in five major U.S. newspapers; by 2019, that figure was well over 500 per month, peaking at a record 797 stories during Thunberg’s U.S. visit in September.

An examination of what’s actually being written about climate, though, reveals a more complicated picture. Using MeCCO’s methodology, FAIR compiled every article mentioning “climate change” or “global warming” that appeared in the New York Times, Washington Post, LA Times, USA Today and Wall Street Journal in August 2017, when only 277 articles ran, and August 2019, by which time the number had soared to 751. (These months were picked to ensure that results weren’t skewed by time of year—climate coverage, like the storms and fires that often set it off, waxes and wanes seasonally—and also to precede the rush of coverage that accompanied Thunberg’s visit.)

And while it turns out that the U.S. media have indeed ramped up their coverage of the climate crisis, they continue to give short shrift to what are arguably the most important factors for determining our future: what specific human practices are responsible for the changing climate, why carbon emissions continue to rise, and what we can and should be doing about it.

2017: Fires and Floods, But Few Solutions 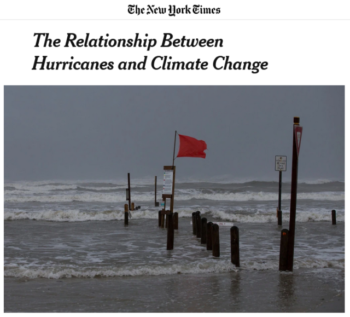 “Theory and computer modeling suggest an increase in storm intensity in a warmer world,” the New York Times (8/25/17) acknowledges.

August 2017 also saw substantial coverage of the Trump administration’s attempts to deny the reality of the climate crisis and roll back efforts to address it, including abandoning the Paris climate accord (New York Times, 8/4/17), relaxing Obama-era fuel-efficiency standards for cars (Washington Post, 8/11/17) and restrictions on building in flood zones (Washington Post, 8/15/17), and approving new mining leases on federal lands for what Trump called “beautiful, clean coal” (New York Times, 8/3/17, 8/6/17).

But as for discussion of the causes—and potential solutions—to all this climate mayhem, those articles were fewer and farther between:

A rare examination of potential ways to reduce carbon emissions on a national scale came when the New York Times (8/17/17) focused on legislation proposed by two Democratic U.S. senators to levy a $49 per metric ton carbon tax (and use the resulting revenues to reduce the top corporate income tax rate, presumably in a bid for Republican support). Even then, though, the Times mostly focused on the bill’s chances in Congress (“a long shot”) and political opposition; the only sources quoted in it, other than the bill’s sponsors, were an oil company lobbyist, anti-tax lobbyist and popular Times source Grover Norquist, two White House officials, a Republican U.S. senator opposed to a carbon tax, and a conservative think tank president who nonetheless supports a carbon tax. Nowhere did the article mention what impact the bill would have on the actual climate—though it did note how much it would be expected to increase gas prices.

2019: Costs of Decarbonizing, But Not of Inaction

Two years later, the number of climate-related stories had soared. Much of this can be credited to the New York Times‘ decision to launch a climate newsletter in November 2017, much of which has ended up being repurposed by the Times on the web and in print. 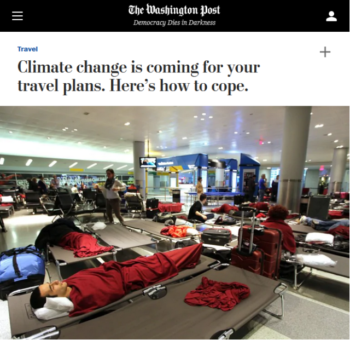 “You can still be a globe-trotter, but…minimize your travel risk,” the Washington Post (8/2/19) reassures.

A new element, meanwhile, came via coverage of the presidential election campaign, which often touched on climate issues, though not always in the most illuminating ways. The New York Times (8/1/19) referred to several Democratic candidates at the July debates having espoused “liberal policies [on] combating climate change”—an odd way to describe attempts to save the planet, especially when the next day the same paper reported on how younger Republicans also consider climate change to be a pressing issue (8/2/19). And, as usual, the media’s focus remained squarely on what the climate issue could do for candidates’ campaigns, not on what candidates could do for the climate: Even a New York Times feature (8/8/19) on the Sunrise Movement’s dedication to pressing for stronger environmental action by Democrats never mentioned what policies activists were seeking, aside from a brief mention of a Green New Deal, a catch-all term that means different things to different candidates (NBC News, 8/23/19).

And as two years before, discussion of the causes and possible solutions to the climate crisis remained a tiny share of newspaper coverage. A major New York Times story (8/15/19) investigated the Adani Group, an Indian fossil-fuel industry giant, for its lobbying for increased coal extraction in Australia, but didn’t mention similar efforts by the fossil fuel industry in the US. (The death of David Koch on August 23 did prompt brief notes on his anti-climate action lobbying in the New York Times, LA Times and Washington Post, though the Post undercut this somewhat by summing up Koch’s actions merely as having “a profound effect on American politics while making him an uncommonly polarizing figure.”) The only major-newspaper story in August 2019 to substantially cover lobbyist attempts to obstruct action on climate change in the U.S. was one in the Los Angeles Times (8/11/19) on accusations that the California gas utility SoCal Gas had used ratepayer dollars to lobby against natural gas use—and it covered it solely as a local story.

Most of the advice to readers on reducing their own personal carbon footprints focused overseas as well. Copenhagen residents were reported to be biking more (LA Times, 8/8/19), while Swedes were cutting down on air travel in a phenomenon dubbed flygskam, or “flight shame” (Washington Post, 8/2/19). (An August 24 op-ed in the Times by travel writer Seth Kugel did note the possibility of Americans cutting down on air travel, but cautioned against “self-flagellation,” and opined that taking airplanes was probably fine so long as our trip “maximizes your connection with the place you’re visiting,” while repeating the canard about biofuels from two years prior.)

The Wall Street Journal (8/8/19) dismissed switching to a plant-based diet as “virtue signaling.”

One means of reducing carbon emissions that did receive widespread attention was switching from a meat-based diet to a plant-based one, thanks to the release of an Intergovernmental Panel on Climate Change report (New York Times, 8/9/19; USA Today, 8/8/19; LA Times, 8/8/19) that advised both better land management practices and cutting back on red-meat consumption—which is highest in the U.S. and Australia—to produce more food with less carbon. (The Wall Street Journal—8/8/19—responded with an op-ed by noted climate-change denier Bjørn Lomborg decrying the recommendations as “virtue signaling.”)

By contrast, that same month BBC News (8/29/19) ran an article on how forestalling climate change will require consuming less, recycling more, traveling more infrequently, and eating less red meat, all encouraged by new taxes to “reward people with low-carbon lifestyles”—though BBC journalists had the advantage of being able to quote a government official, top governmental environmental scientist Ian Boyd, saying these things. (As always in coverage of climate and so many other things, it’s not news until somebody in power says it is.)

It’s not that it’s hard to find explanations of which climate strategies would provide the greatest hope for staving off disaster. Project Drawdown, a site that grades potential solutions by their impact, ranks better management of refrigerants, switching to wind and solar power, and changes in diet and food waste as among the most immediately effective measures. (Electric vehicles, a popular focus for those arguing that technology will save the day, rank a disappointing 26th, in part because they have a large carbon cost to manufacture and won’t help if they’re charged with fossil-fuel-generated electricity; biofuels only made it to 34th, though Drawdown does include them as a possible stopgap measure until more truly renewable energy sources can be brought online.)

The Exponential Roadmap, a study by 22 Swedish scholars, rates switching to solar power, increasing recycling of materials, retrofitting buildings to be more energy-efficient, increasing use of electric vehicles and mass transit, switching to a plant-based diet and reducing deforestation among the most important actions to forestall the climate apocalypse.

None of these methods, climate experts warn, will be possible on a large scale solely by individual action; electric cars, as just one example, are still seen as too expensive and having too few charging stations, two items that are unlikely to be solved without a dramatic shift in government policies. So while that may spare readers from any unnecessary “self-flagellation,” the important corollary is that preventing climate catastrophe will require both individual consumer action and governmental action—as well as addressing the political reasons why governments have been so slow to act.

The media’s shift toward acknowledging the reality of climate change is welcome, if three decades too late, given that the IPCC has been sounding essentially the same alarm about a warming planet since 1988 (Guardian, 3/30/14). But the public presentation of the climate crisis remains carefully constrained to focus on the horrors awaiting us, not on what can be done to ward off the worst, or who stands in the way of doing so. When climate coverage leaves that out, it amounts to mourning the Earth without trying to save it.