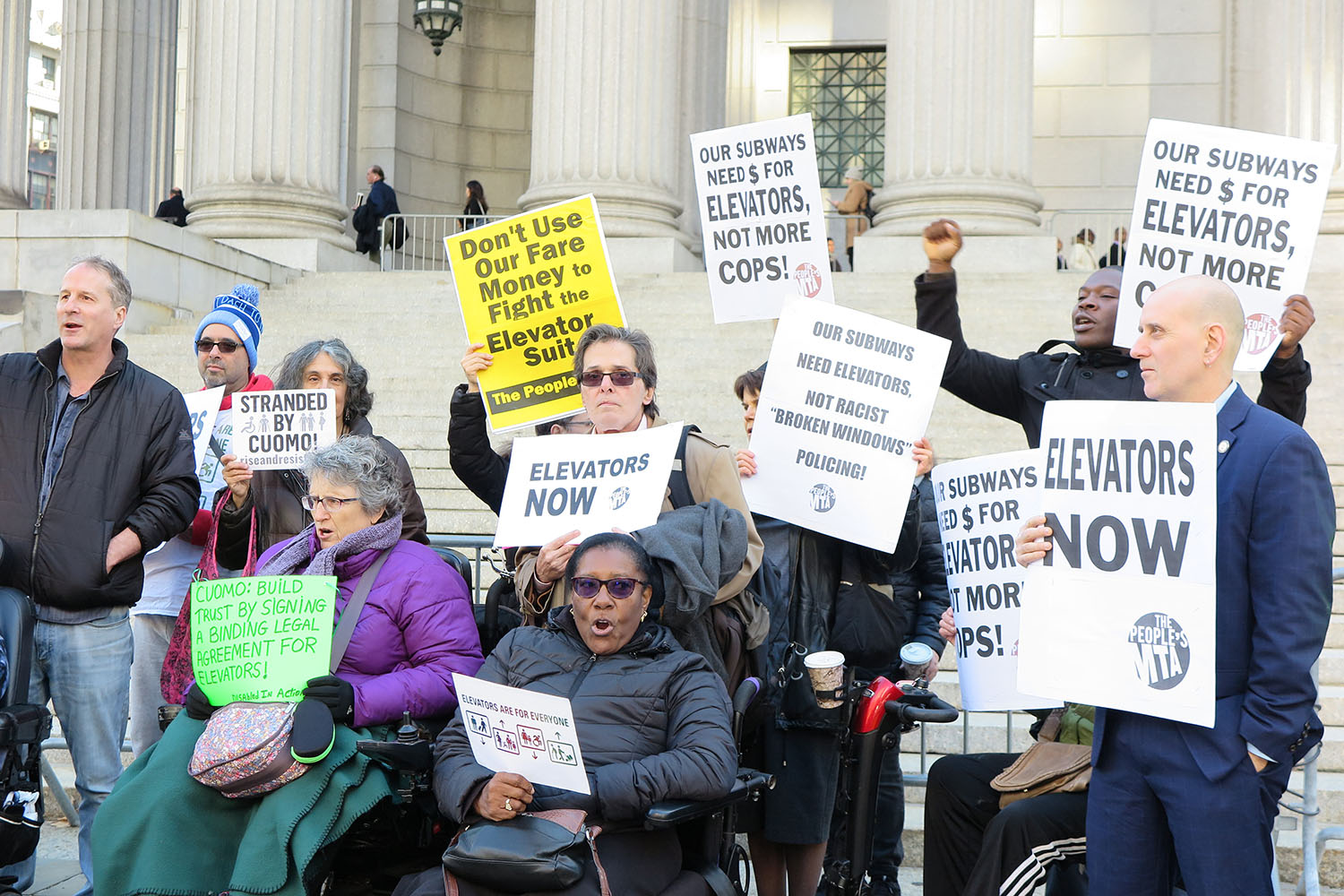 Members of People’s MTA; Rise and Resist’s Elevator Action Group, Disabled In Action; and the People’s Power Assemblies NYC protest at the base of the New York State Supreme Court Building. Photo by Dawn Starin.

On a brisk, blue-sky morning in the autumn of 2019, outside the New York State Supreme Court Building in Manhattan and across the street from Thomas Paine Park, protesters were chanting:

What do we want? Elevators!
When do we want them? Now!

Just below the steps leading to the engraved words of George Washington—”The true administration of justice is the firmest pillar of good government”—members of the People’s MTA; Rise and Resist’s Elevator Action Group, Disabled In Action; and the People’s Power Assemblies NYC were demonstrating for their right to justice. This coalition of concerned New Yorkers and activists were calling on New York State and Governor Andrew Cuomo to stop violating the New York City law that requires a minimum number of accessible subway stations and to sign a legally binding agreement to make the public subway system accessible to all.

For people with certain disabilities, elevator accessibility can determine their movement throughout the city every day. The dearth of elevators in the subway system often means intricate and time-consuming planning, longer trips, taking buses—sometimes with multiple transfers—even getting trapped in stations or on platforms.

Accessibility allows for true integration in society through involvement in the community, schools, and the work place. “The present transport system in New York City makes it impossible for people with disabilities to participate in civic, cultural, and economic life,” wheelchair user and disability rights activist Sasha Blair-Goldensohn wrote in a 2017 New York Times op-ed. A worst-case scenario can lead to not leaving the house because of transport-induced social isolation. Susan Dooha, the executive director of the Center for Independence of the Disabled, NY (CIDNY), points out that the inability to get to work, school, family and social gatherings, and health care appointments actually violates civil rights.

As Judith E. Heumann, an American disability rights activist and the first and last (the post has been vacant since January 2017) US Department of State special adviser for international disability rights, writes in a December 2019 piece at The Hill: “the inclusion of disabled people is a fundamental part of democracy and essential to the full realization of human rights.”

Although the subway system, New York City’s lifeline, now serves nearly six million people every day and has somewhere between 424 to 472 stations (the numbers vary depending on how the stations are counted), barely 20 percent are accessible via an elevator. In a recent survey conducted by the office of Manhattan Borough President Gale A. Brewer, of these elevators, 54.3 percent were unclean, 53.5 percent had serious odor problems, and 5.2 percent weren’t even working. On average an elevator breaks down fifty-three times per year, and these outages can last days or even weeks.

Clearly the access problem isn’t simply about more elevators; it’s also about maintaining existing elevators and making sure that everyone has dignified, easy access to and within the public transport system. Furthermore, as a number of lawsuits now show, the Metropolitan Transportation Authority (MTA) has a longstanding pattern of ignoring their obligations under the Americans with Disabilities Act (ADA) when renovating stations by not installing elevators or other stair-free routes.

While many subway riders know that stations with elevators are few and far between, and properly functioning, clean elevators are even less common, in some parts of the city, residents with disabilities have no access whatsoever. The rare accessible stations tend to be spaced out by at least thirty blocks. Do members of the public and politicians who hold the purse strings understand how difficult—even impossible—transport can be without elevator-accessible stations for some members of the public?

“There are no accessible subways anywhere near where I live,” says Jean Ryan, president of Disabled In Action (DIA). Ryan is reliant on her motorized wheelchair but says she hasn’t been able to use the subway for twenty-five years. Indeed, there are many “ADA transit deserts” throughout the city. Of the 122 New York City neighborhoods served by the subway system, sixty-two lack even a single accessible station. This results in 640,000 confined New Yorkers.

Accessibility isn’t just an issue for wheelchair users—it’s an issue for anyone with limited mobility, including the elderly, anyone with heavy luggage or packages, and caregivers with strollers or young children. For those who are able-bodied or only carry light loads in small backpacks or never have to struggle with strollers and small children, the need for a properly functioning, clean elevator in the subway system might seem to be an extravagance or a mere convenience. But, as Blair-Goldensohn rightly points out, “we have to make the general public and the powers that be understand that safe subway accessibility is a necessity, and those who are denied access are being denied their civil rights.” He also points out that with so many wheelchair users unable to use the subway, their absence means people fail to realize the problem.

The New York subway system is one of the oldest, largest, and most important public transportation systems in the nation. It is also, however, considered the worst by percentage of accessible subway stations. CIDNY’s Dooha wonders why. “New York City is so recalcitrant, while Boston and Chicago are moving forward with plans for full accessibility and both San Francisco and Washington, DC, are fully accessible.”

One has to wonder: How much worse the situation has to get before there is finally an ethical and legal right to equal, decent transportation facilities?

In January 2019, Malaysia Goodson, a twenty-two-year-old mother, entered the Seventh Avenue subway station at 53rd Street pushing her one-year-old daughter, Rhylee, in a stroller. Carrying the stroller down a flight of stairs, Malaysia fell to her death. Amazingly, Rhylee was unharmed, but is now motherless. There were no elevators or downward escalators at the station.

It has been over one year since Goodson died and over two and a half years since a class action lawsuit was filed against the MTA, the New York City Transit Authority, and New York City for violating the federal ADA and for their failure to make the subway system safely and easily accessible for everyone.

Above a triangular pediment at the top of the rampless flight of thirty-two steps leading up to the courthouse are three statues representing law, truth, and equity. At the bottom of the steps members of the public are demanding their right to those noble ideals. How much longer will they be denied those rights? How much longer will they have to wait for a binding legal agreement with a schedule to get full accessibility?

The landmark Americans with Disabilities Act celebrates its thirtieth birthday this year. Will 2020 finally see the wheels of justice get up to speed?

Dawn Starin is an anthropologist. Her writings have appeared in both peer-reviewed journals and in popular publications as varied as Al Jazeera, The Christian Science Monitor,  Natural History, The New Internationalist, The New York Times,  Philosophy Now, The Progressive, and Scientific American amongst others.