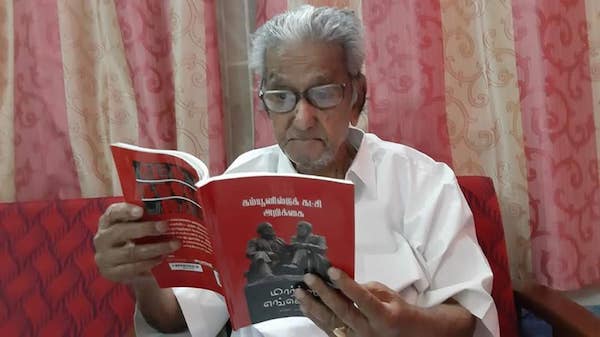 On the night before Red Books Day, on 21 February 2020, in the Indian state of Tamil Nadu, N. Sankaraiah–one of the thirty-two founders of the Communist Party of India (Marxist)–read from M. Sivalingam’s new translation into Tamil of the Communist Manifesto. Comrade Sankaraiah, age 98, said that he had first read the Manifesto at age 18. Over the years, he returns to the book because each time he reads it the brazing prose teaches him something new. And something that–sadly–seems ageless.

Towards the end of the Manifesto, Marx and Engels lay out a provisional ten-point plan that should make sense to any decent person. This list was drafted in 1848, and yet it seems not only contemporary but necessary. It opens with the demand to abolish the idea of private property in land–a demand that today bristles in Brazil, where there is a debate over an Agrarian Reform, and a demand that is pressing in South Africa, where the debate restarted in 2018  on the expropriation of land without compensation to address historic wrongs caused by widespread dispossession (the proposals from the legislature are expected in March 2020). There are demands for progressive taxation and for the abolition of the right of inheritance, two socialist measures to recycle the surplus and to prevent the absolutely obscene concentration of wealth.  The demand for higher wealth and corporate taxes have been put squarely on the table in the United States, where the Democratic Party’s frontrunner Bernie Sanders has said that wealth inequality corrupts democracy. Professor Jayati Ghosh of Jawaharlal Nehru University in New Delhi writes that global financial secrecy needs to end so that we can have a better audit of the wealth hidden by the super-rich and the multinational corporations.

Finally, and skipping over a set of fascinating demands about manufacturing and agriculture, Marx and Engels offer what has become a commonplace belief; namely, ‘free education for all children in public schools’. According to the United Nations, more than 50% of young people in half the world’s countries have not been able to complete upper secondary school, while 50% of the poorest children have not completed primary school. UNESCO has suggested that a good metric for funding on education would be 6% of Gross Domestic Product. Only a quarter of the world’s states meet this low barrier, with many not spending more than 3% of GDP. 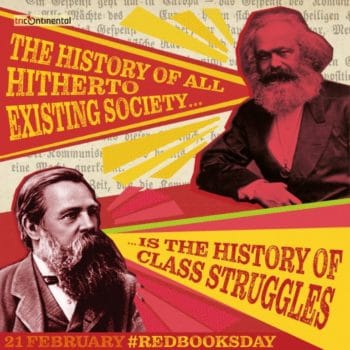 One hundred and seventy-two years later, and the skeletal programme of the Communist Manifesto remains alive and well.

Little wonder then that despite the fall of the USSR and the calumnies heaped on both Marxism and Communism, the attraction of the socialist and communist horizon remains. Whether one has to add the word ‘democratic’ before ‘socialist’ or eschew the word ‘communist’ entirely, the bare fact is that there is large-scale disappointment with the current conditions–where there is vast wealth, but immense social inequality. The diminished standing of capitalism and its solutions to its own crises has led many billions of people–even in the West–towards a break with the capitalist consensus. Last year, a Gallup poll showed that 43% of residents in the United States think that socialism would be good for their country. It is what has given buoyancy to Bernie Sanders’ run for the U.S. presidency.

We did not need a Gallup poll to predict that the Red Books Day would do well. From South Korea to Venezuela, tens of thousands of people went into public places to read the Manifesto in their own languages. In Tamil Nadu (India), which was the epicentre of Red Books Day, at least 30,00 people participated, whether in schools or in public, in village lanes or in trade union halls. In South Africa, the Manifesto was read in Sesotho, while in Brazil it was read in the settlements and schools of the Landless Workers Movement (MST) and in Nepal it was read on the streets and in peasant union offices. Many people read the Manifesto for the first time, while others–like Comrade Sankaraiah–went back to it for inspiration and theory.

In May 1991, just as the USSR began to dissolve, the playwright Tony Kushner debuted his magnificent show Angels in America. The second half of the show is called Perestroika, the Russian word for ‘restructuring’ that convulsed into the destruction of the USSR. The play opens in the Chamber of Deputies in the Kremlin in January 1986. Aleksii Antedilluvianovich Prelapsarianov, the world’s oldest Bolshevik, is speaking. He tells his comrades that when he was young, he was moved by ‘a beautiful Theory, as bold, as Grand, as comprehensive a construct’, namely Marxism. ‘What have you to offer now?’, he asks the ‘children of this Theory. What have you to offer in its place? Market incentives? American Cheeseburgers? Watered-down Bukharinite stopgap makeshift Capitalism! NEPmen! Pygmy children of a gigantic race!’. He refers to Nikolai Bukharin and the New Economic Policy in the USSR that ran from 1922 to 1928, during which a mixed economy developed in the USSR. 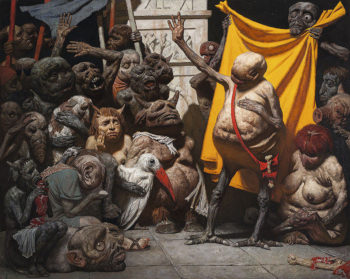 At least Bukharin could make an intellectual case for the New Economic Policy; what case could be made for the post-Soviet world? ‘If the snake sheds his skin before a new skin is ready’, the Old Bolshevik said, ‘naked he will be in the world, prey to the forces of chaos; without his skin he will be dismantled, lose coherence, and die. Have you, my little serpents, a new skin?’. Without a new skin, the post-Soviet citizens saw their incomes collapse, their health deteriorate, and their general well-being decline. The bright lights of fast food and mega-malls entered their society, but along came with it the indignities of ill-health and poverty, with deep-seated alienation and social unease.

The Old Bolshevik, like Comrade Sankaraiah, fastens to a theory of life that puts humans before profit and sensitivity before greed. The philosophy of capitalism suggests that the psycho-social palate can be reduced to greed, or, in more scientific language, to profit maximisation; the emotional range of the businessman defines the contours of human behaviour. But human beings are made of more than greed, since we love, we think, we consider, and–above all–we care. We have a great capacity for empathy and sympathy. To give an example of the wretched philosophy of capitalism: to increase profit, bourgeois politicians move towards austerity regimes that cut public spending for human needs (health care, elder care, childcare, education). Because of patriarchy, women in families often bear the immense weight of being primary caregivers of families, children, and the elderly. According to the International Labour Organisation, women and girls put in 12.5 billion hours of unpaid child work each year; by Oxfam’s calculations, this would be worth about $10.8 trillion per year, but bear in mind that this is unpaid work, work done not out of greed but out of care and out of the imperatives of patriarchy. This unpaid work by women and girls is–by itself–three times the size of the global tech industry, and yet–because of the idea that profit is god–the tech industry is seen as more important than the unpaid care sector. That’s the abomination sniffed by the Old Bolshevik. He knew that the abandonment of the ‘beautiful Theory’ would lead to this alleyway of desolation. 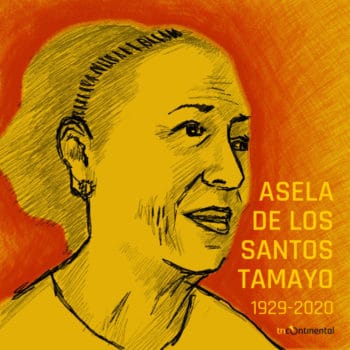 Early in the morning of 23 January 2020, Asela de Los Santos Tamayo died at the age of 90. For each of her years, Asela–as she was known to everyone–remained committed to the Cuban Revolution. From her days as a student activist at the University of Oriente, Asela developed a clear understanding of the ‘Beautiful theory’ that drew her into the 26th of July Movement and eventually participated in an armed action in Santiago in November 1956 to distract the authorities while Fidel Castro and his small group of guerrillas could land the Granma and begin their insurrection. Along with Celia Sánchez and Vilma Espín, Asela helped transport fighters to the Sierra Maestra to strengthen the ranks of the guerrilla. In August 1958, Asela joined the Second Eastern Division of the Rebel Army in Oriente Province; her commander, Raúl Castro asked her to organise the education system in the rebel zone. Asela helped establish four hundred revolutionary schools and study groups for the fighters. The ‘Beautiful theory’ took on a mass character in these schools.

After the Cuban Revolution, Asela was one of the founders of the new Communist Party. With Vilma Espín, she led the Federation of Cuban Women, spending her life fighting against patriarchy and homophobia. In 1966, Asela became the director of the Camilo Cienfuegos Teaching and Military School in Matanzas, which was one of the key institutions for the development of the ‘Beautiful theory’ in the Cuban context. In 1970, Asela joined the Ministry of Education, eventually becoming its Minister.

People like Asela wear commitment as their uniform, deeply gripped by the need to serve the people and to the promise of the ‘Beautiful theory’, one place to find it is, of course, in the Communist Manifesto.